Between 1935 and 1975, the U.S. military made use of asbestos abundantly, particularly within the navy, as the mineral has numerous convenient physical and chemical properties, such as fire resistance and durability, as well as a low purchase cost. Thus, during the last century, over 300 distinct construction products and equipment components on military vessels would contain asbestos, posing a tremendous health threat to anyone aboard the ships. While people who spent long periods of time in the areas with the highest risk of asbestos exposure, such as the engine rooms, are now the most susceptible to developing a harrowing disease, anyone who served in the U.S. Navy is in danger, to a greater or lesser extent.

The menace of fire at sea was inevitably present on each military ship, as the machinery employed to keep it moving and ensure the proper functioning of the vessel was prone to overheating and thereby bursting into flames at any time. Consequently, a fire watch was required to permanently oversee the areas of the ship which were most likely to catch fire. These would include: 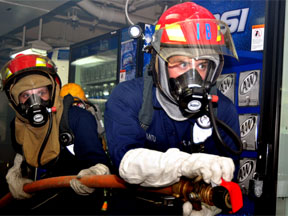 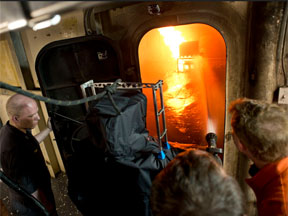 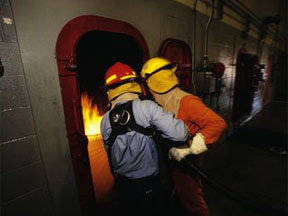 On Navy ships, fire watches, also known as fire lookouts, were responsible for surveilling the vessel around the clock and promptly reacting in the event a fire would start. They were in constant communication with other crew members so that they could rapidly report a potential fire. Fire watchers also needed to keep daily records of any suspicious or prospectively hazardous materials or conditions they observed on the ship. During hot work such as welding, the presence of a fire watch was especially necessary, since the risk of fire was extremely high. They would carefully inspect the area for any flammable agents such as trash, rags, materials, or liquids beforehand so that the risk of fire would be minimal. Lower decks where sparks or slag could end up were vigilantly observed as well.

The ideal individual for this job had excellent vision, remarkable attention to details, as well as good communication skills. A fire watch might or might not have been assigned other tasks during their main activity.

However, since asbestos was lurking on military ships for the better part of the last century, plenty of fire watches were exposed to carcinogenic fibers while on duty. Hot work required adequate, solid protection and thereby, asbestos was both in the rooms where it would take place and in the equipment the people who would perform it would wear. Therefore, by spending most of their time nearby shipmates who were engaged in hot work, fire watches were unavoidably inhaling and ingesting asbestos fibers, too.

Furthermore, if a fire began and they were involved in extinguishing it, the amount of asbestos which would reach the inside of their body was even larger, as the flames would disturb asbestos-containing materials and equipment, prompting fibers to be released in the air. To make matters worse, many fire watches were assigned the task of cleaning up the debris after a fire, which once again represented a major health hazard, since asbestos fibers would easily become airborne during such work.

If you served in the U.S. Navy as a fire watch, we advise you to closely monitor your health, as you are at significant risk for developing a terrible disease as a consequence of asbestos exposure. It is worthy of note that these diseases, which include lung cancer and mesothelioma, are rarely accompanied by clear, perceivable symptoms and can arise up to 50 years following the inhalation or ingestion of toxic fibers. Thus, undergoing regular medical examinations consisting in a chest X-ray and a series of pulmonary function tests is essential and may even save your life.

"I served as a fire watch aboard USS Barney. We had no protection. I spent months breathing in fibers floating in the air after asbestos was removed by yard workers. There had been a fire in the shipyard and I had to clean up asbestos fibers that covered all passageways outside the engine rooms and boiler rooms in 1974", says Kurt S.