Before the medical community recognized asbestos's dangers, the mineral was heavily used onboard ships and in shipyards. Asbestos was desirable because the durable mineral was not easily corroded and was resistant to heat and flame that could devastate a ship. Because of the Navy's requirement for more ships, there was a surge in shipbuilding activity between World War II and the Vietnam War.

Asbestos materials were often employed as insulation in steam and engine rooms, as well as around pipes running throughout the ships. Consequently, those who worked around asbestos-contaminated pipes, boilers, and other items in shipyards were also exposed to asbestos dust. Ship sprayers and painters were put at risk of inhaling asbestos dust while painting with paint reinforced with asbestos or taking off old paint. Because asbestos-related illnesses have a latency period anywhere between 10 and 50 years, we are just now seeing the devastating consequences of asbestos exposure in the workplace.

According to Randy G., a shipyard painter, this occupation involved a lot of dangers: "asbestos was used in a variety of materials, joint compounds, and textured paints - all of which I worked with on a daily basis".

Asbestos-containing paint was employed on ships because it was fireproof, non-corrosive, stable, and gave increased tensile strength to products and improved their holding power. It was sprayed directly on specific surfaces in certain cases. The sprayed mixture included various amounts of asbestos, as well as other adhesives and resins. This spray-on process often was not done with the proper respiratory protection. Ship sprayers and painters are considered to have one of the highest rates of asbestos-related illnesses. 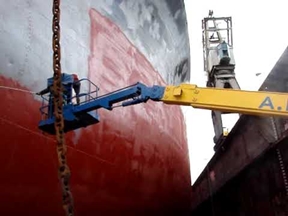 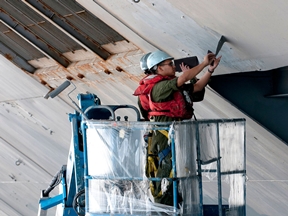 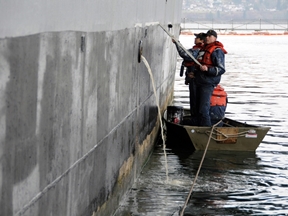 Additionally, painters were often responsible for preparing surfaces before painting. This would need painters priming, taping, cleaning, filling, caulking, and sanding a variety of surfaces, including wallboard, joint compound, and asbestos-containing tapes. All of these operations have the potential to disrupt asbestos-containing materials and generate asbestos dust, putting all employees in the vicinity at risk. Painters who did not use respirators were exposed to huge quantities of invisible asbestos fibers, which entered their lungs.

Painters who worked with millwrights at shipyards may have been exposed to asbestos when removing and replacing different pump components, such as gaskets and packing. Additionally, painters may be needed to work around contractors insulating steam pipes, boilers, or other pieces of equipment. Working with asbestos insulation, cutting and installing pipe covers, and mixing and applying refractory cement, produced a dusty and hazardous work environment for these laborers.

Some of the most common painters' responsibilities include the following:

Exposure to asbestos is the sole known cause of mesothelioma, which develops when fibers of asbestos become trapped in the lining of the lungs or the stomach and sometimes even the heart, and cause scarring. Symptoms of mesothelioma don't surface until usually many decades after the exposure. The disease is incurable, but early diagnosis may significantly enhance one's life expectancy and quality of life.

Asbestos exposure is also linked to asbestosis, and lung cancer, both of which may manifest years after the initial exposure. Although we think of asbestos exposure as solely occurring in generations' past, the truth is that we will continue to witness the negative consequences of avoidable asbestos exposure for many years to come.

What Can Ship Sprayers and Painters Adversely Affected by Exposure to Asbestos Do?

Prior to 1980, professional painters who blended paints inhaled significant amounts of asbestos particles while working. It is in their best interests to call their doctor and schedule a screening. The latency period for these illnesses ranges from 20 to 50 years, and the diseases often go undetected until they've reached advanced stages, which is why early detection and intervention are the keys to survival. These illnesses are often misdiagnosed in their early stages, but with information about your employment history, your doctor will be able to diagnose you more accurately.

If you or a loved one has developed an asbestos-related condition due to asbestos exposure while working as a sprayer/painter, you may also want to consult with an experienced attorney. We can connect you with the right attorneys in order to be advised of your rights and options given your specific circumstances.