Shipbuilders in the US have faced a high risk of developing mesothelioma, as shipyards were especially dangerous in the 40s and all the way to the 60s before the risks of asbestos use were fully understood. During that time, asbestos was used throughout ships, from the engine room to the kitchen. Men and women who helped build or repair such ships, as well as the sailors who spent months at sea on such ships, faced a sharply increased risk for mesothelioma. For example, between 1982 and 2000, there were 632 cases of mesothelioma recorded (7 times the national average) in Hampton Roads, Virginia.

Statistics in Italy Show a High Incidence of Mesothelioma

A study conducted several years ago in Italy found a high incidence of mesothelioma among men who worked as shipbuilders in the 1940s to 60s in Monfalcone. A pair of researchers from Italy's Center for the Study of Environmental Cancer examined the Monfalcone shipyard's 1942 hiring records and compared them with archived health records of surrounding hospitals decades later. They discovered the following:

Another study based on death certificates collected in 83 countries showed the highest rates of mesothelioma in the UK (age-adjusted mortality rate 17.8 per million), Australia (AAMR 16.5), and Italy (AAMR 10.3). This being showed, it is easy to see that mortality from malignant mesothelioma has considerably increased in numerous countries. 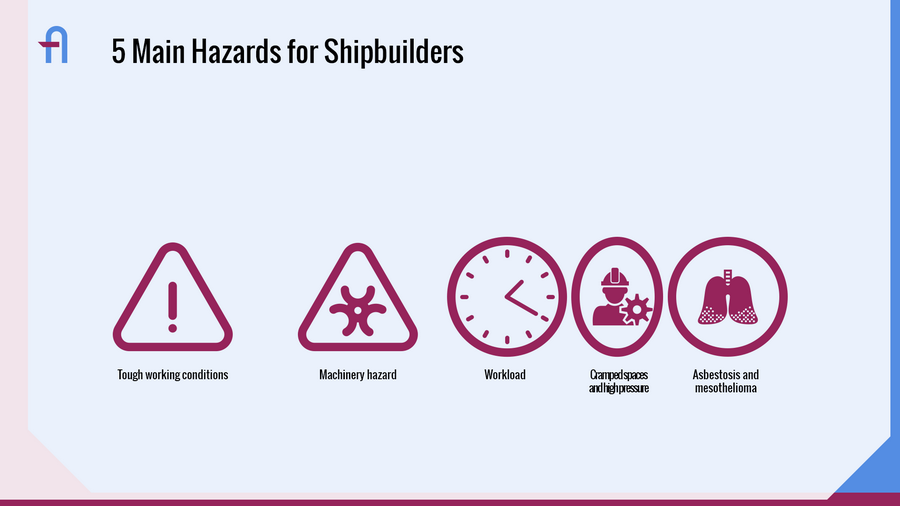 Shipyard employees work in some of the most risky environments, which makes it a work profile that demands constant caution 24/7. Here are some of the facts that make working in a shipyard such a dangerous activity:

Shipyards are not one of the most comfortable places you can expect to work in. Constant danger is present during the whole day and workers, as well as employers must take several precautions to ensure nobody gets hurt on the job. Extremely cramped spaces, heights, slippery surfaces, machinery and high pressure in tiny spaces are just a few of the working conditions a shipyard worker faces on a daily basis.

Work never happens on a small scale in a shipyard! The equipment used on the worksite is often complex, comes in huge sizes and requires a lot of skill and strength to be handled. Even a small error while working with such heavy machinery can lead to catastrophic injuries and death for any shipyard worker. Records of seriously injured shipyard workers date back to as early as the 1940s.

This is not your regular 9 to 5 office job. The extreme nature of a shipyard job means the employees have to be available at all times and the erratic time schedules can lead to human errors and ultimately, accidents.

The tiny enclosed spaces in a shipyard are probably the riskiest places to be working in. Working in such tiny spaces comes with an elevated risk of physical injuries to limbs, head or other body parts. Suffocation and asphyxiation are also common issues workers face when working in confined places. Often, the high pressure found in enclosed spaces can lead to eardrum rupture. Shipyard workers often complain that their hearing abilities have been affected after working constantly in high pressure conditions.

Asbestos, a known carcinogen, is still being used as a construction material in many vessels even today. Shipyard workers involved in the manufacturing and maintenance repairs of ships often are extremely exposed to the dangers of asbestos and the diseases caused by it. Asbestosis and mesothelioma are very serious diseases that can take years to surface. They appear in workers who were exposed to asbestos for a long time at their workplace (occupational exposure).

Workers involved in dismantling decommissioned ships are at a high risk for mesothelioma if they accidentally breathe in or ingest asbestos fibers. Even if workers are wearing special negative-pressure respirators and spend a limited time in an asbestos-contaminated environment, according to OSHA's guidelines for safe shipbreaking in the presence of asbestos, they are still at risk of breathing/ingesting asbestos fibers. Thus, even with modern laws and regulations set to protect workers from asbestos exposure, ships and shipyards remain dangerous.

How to Avoid a Mesothelioma Misdiagnosis

The Importance of a Second Opinion in a Mesothelioma Case