The USS Acubens was an Acubens-class general store issue ship, a type of vessel that was mainly employed by the United States Navy during World War II. The name of the ship was inspired by the alpha star Acubens of the Cancer constellation. The USS Acubens was mainly involved in operations from World War II, mostly delivering supplies and military equipment to different conflict zones. For its service, the Acubens was awarded a World War II Victory Medal, but the crew was also honored with an American Campaign Medal as well as an Asiatic-Pacific Campaign Medal. 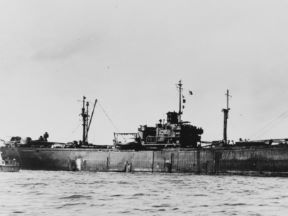 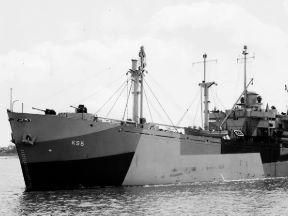 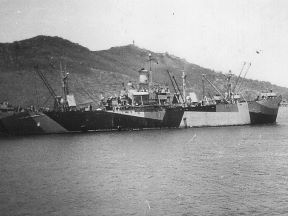 History of the USS Acubens (AKS-5)

The USS Acubens was built by the Delta Shipbuilding Company in New Orleans, Louisiana under the initial designation of SS Jean Louis. However, the ship suffered slight modifications and it was re-designated USS Acubens (AKS-5) at the Todd-Johnson Drydock, Inc. in New Orleans.

Mrs. J. A. Farrington christened the vessel and Commander Edward B. Ellis was assigned in command on its commissioning in July 1944. The Acubens then performed sea trials out of Norfolk, Virginia, after which it sailed to the Pacific, entering the area on 8 September. The ship was steaming alongside a convoy that was headed to New Guinea. Its course with the convoy was cut short by a fire that erupted on board that had caused some damage to some pieces of vital equipment. The incident was followed by quick repairs by the personnel on board.

After completing repairs, the Acubens was stationed at Hollandia in New Guinea in October 1944, where it operated until 10 November, stocking up ships pertaining to Task Force 76. On the day of November 10th, the vessel carried artillery to Brisbane, Australia.

By December, the Acubens left the Australia area and was headed to the Philippines where it stayed for the time of the war. The ship developed a routine that would involve loading supplies and armament at Milne Bay and at Manus Island that it would then unload to locations in the Philippines.

On 25 November 1945, the ship left the Philippines, sailing for San Francisco to prepare to be placed out of commission, which occurred on March 1946. The following year in July, the Acubens was taken off the Naval Registry, and in October 1964, the vessel was sold for scrapping.

The fact about asbestos exposure is that many of those to whom it happened have been unaware of it at the time. Being a toxic mineral that did not raise any concerns among those that worked with items and equipment containing it made it an especially hazardous element.

Asbestos fibers were used for the greater part of the last century by industries and businesses all across the United States for its remarkable physical and chemical properties. For instance, it was noticed at the time that pouring asbestos into other materials would make them stronger, more durable and resistant to fire.

These qualities were highly desired by Navy officials, which is why the mineral started to be heavily incorporated into shipbuilding. The spaces below the deck included large quantities of asbestos in their construction materials since the risk of fire was increased in those hot and narrow rooms that were difficult to properly ventilate on the regular.

Have You Been Exposed to Asbestos on the USS Acubens (AKS-5)?

We can help you understand more about how exposure to asbestos has been affecting the health and the livelihood of Navy veterans. For more information, call us at 760-621-6147.