The USS Almaack (AKA-10) was an Almaack-class attack cargo ship. The inspiration behind the name of the vessel was Almaack, which is a star system that is part of constellation Andromeda. For the most part, the ship conducted operations during World War II, having been decommissioned as the war came to an end. The Almaack received six battle stars for its service in the combat area during World War II. It was also honored with the Philippines Presidential Unit Citation, an award granted in the name of the President of the Republic of the Philippines.

Technical Features of the USS Almaack (AKA-10) 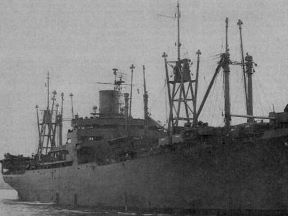 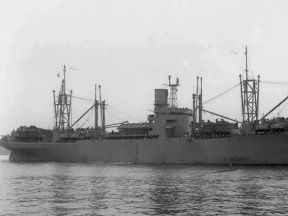 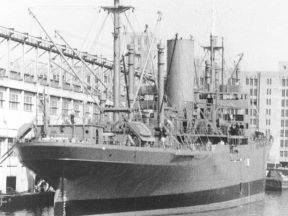 History of the USS Almaack (AKA-10)

The USS Almaack was built at the Fore River Shipyard Quincy in Massachusetts under the name Executor, initially destined for merchant purposes. It was modified on 3 June 1941 into a cargo ship in Hoboken, New Jersey at the Tietjen and Lang Dry Dock Company and given the new name Almaack and a new classification, i.e. AK-27. The ship was christened by Mrs. A. R. Winnett and commanded by Commander Thomas R. Cooley on its commissioning day on 15 June 1941.

After loading enormous quantities of coal as well as road building equipment, the Almaack was headed to Iceland, leaving New York as part of a convoy in July 1941. By August, the ship had reached its destination where it discharged upon arrival.

Ordered for Halifax, in Nova Scotia, the ship joined another fleet, forming convoy HX 154 along which it was to travel to Iceland the second time. On their way to Iceland, one of the escort ships detected challenging conditions at sea and the entire group had to be redirected through the rough route. A report of the circumstances later states that the Almaack due its design had a big difficulty in maintaining its position in convoy and barely managed to keep itself from going faster than 7.5 knots so much so that the vessel went on its own three different times but eventually found its way back to the convoy.

After that journey, the Almaack had to go to Norfolk to receive repairs at the Norfolk Navy. With construction equipment on board, the ship departed New York in January 1942, traveling as part of Convoy AT 12 to Belfast, Northern Ireland.

In April 1942, after loading again at New York, the Almaack left for the Pacific area, discharging at Tongatapu in May and then returning to the United States, arriving at San Diego by June. The vessel entered the Craig Shipbuilding Company in Long Beach to undergo a few reparations, after which the ship went back to the San Diego area to engage in landing exercises.

In September 1942, the Almaack traveled to Scotland as part of Task Force 38. Upon arrival at Loch Fyne, the ship had unloaded and then took part in training exercises in preparation for the American invasion of North Africa. At the end of the training sessions, the ship was ordered to take the route of North Africa.

On 8 November 1942, the vessel noted gunfire near the city of Algiers but managed to power through unloading part of its cargo, prioritizing guns and vehicles as the weather was also getting increasingly adverse.

As it was struggling through its operations, the crew on the Almaack were the witnesses of USS Leedstown being hit by a torpedo, with more attacks from German aircraft following and more American vessels having difficulties conducting their missions. The Almaack finished unloading by 11 November 1942 and docked at Algiers Bay with its part in Operation Torch completed.

After leaving Algiers, the ship joined the vessels of Convoy MKF1(Y) at their rendezvous point in Gibraltar. The vessel was torpedoed by a German submarine with great damage having been created to its engine and fire rooms as well as flooding occurring on most of the ship. The crew was fortunate to have the bulkheads contain the water, keeping the vessel afloat even when it was in very poor conditions. Four engineers died during the attack and then an additional four were badly injured when an explosion occurred in the engine room.

Nonetheless, there were 12 officers left on board, along with 112 other servicemen that handled the hectic situation. This means that 8 officers and 185 men had been removed from the Almaack and took on board by one of the escorts that were traveling with the convoy.

In December, the vessel was dry-docked while still at Gibraltar but an evaluation of the damage determined that the ship was to be tended properly back in the United States, which is exactly what ended up happening with the ship coming out of repairs under the new designation of attack cargo ship AKA-10.

The Almaack then performed training exercises into January 1944, alternating between locations such as Coronado and Oceanside in California. The ship joined Task Force 53 and left San Diego on 13 January 1944 to participate in the attack of the islands in Kwajalein Atoll.

In April, the ship docked at Honolulu and discharged its cargo after which it was stationed at Pearl Harbor where it received repairs. The Almaack left Pearl Harbor on 1 May traveled to Maui where it loaded military equipment for the units of the 4th Marine Division in anticipation of invading Saipan in the Marianas. As part of Task Group 52.15, the ship steamed to the Marshall Islands where the assault on the Marianas was planned to take place.

By 15 June 1944, the Almaack was sailing in the area just off Saipan and it only took it 19 minutes to have all its tank lighters at sea. Despite being time efficient, the ship was still hit by an enemy shell, but with no major consequences. The only adjustment made by the crew was to have the ship retire at sea during night time and only go back to the shore in the morning to continue unloading its cargo.

Meanwhile, the Almaack joined Task Group 53.19, along which it steamed to Guam where it arrived in July and for the next six days it participated in the invasion of Guam.

On September 1944, the Almaack was replenished at Eniwetok while also loading extra fuel and supplies before leaving for the Manus Island where troops were preparing for the attack on Leyte. As part of these operations, the Almaack was to report to the units of 7th Fleet with the help of which, the ship had a smoke barrier around it with so as to be shielded from Japanese jet fighters as it was unloading its supplies.

On a second trip to Leyte in November 1944, the Almaack traveled along the 8th and the 24th Transport Divisions. Both transports were under attack of Japanese torpedo planes and it was the artillery launched by the Almaack that drove them away.

Between 15 and 19 January 1945, the ship was docked in the Leyte Gulf and after receiving new orders, it steamed to the Western Carolines and arrived at Ulithi by 23 January. On 6 February, the Almaack left the location and was headed to Guam to take on board units of the 3rd Marine Division as its contribution to the preparations for the attack on Iwo Jima.

Due to overcrowded beaches, the ship was having difficulties with unloading cargo so it would have to retire seaward at nightfall. By 26 May 1945, the Almaack completed its operations in the area off Iwo Jima and began its journey back to the United States, arriving at San Francisco on 13 June.

The Almaack was placed out of commission at Brooklyn in May 1946 and it was taken off the Naval Vessel Register in August that same year as it was determined that the vessel was not an essential asset to the defense forces of the United States.

Asbestos Risks on the USS Almaack (AKA-10)

Due to its property of fireproofing materials, asbestos was in high demand for the U.S. Navy with a notable increase in its use in the military field at the outbreak of World War II when the contracts for a great number of warships were laid down.

The substance was considered a miracle mineral because it displayed great strength and flexibility, adding to the durability of the compounds it was mixed in, but also because it provided all these benefits at affordable prices, having been one of the few resources that were not scarce during times of war.

Because of its intense use, it is highly likely that crew of all ranks came into contact with the toxic fibers. The risk is significantly higher if the servicemen were assigned to tasks that would require for them to be in the spaces below the deck for long times since those were the places that contained the most asbestos from floors to walls, to equipment, all fireproofed for safety at sea.

Have You Been Exposed to Asbestos on the USS Almaack (AKA-10)?

If you served on the USS Almaack (AKA-10), you might have been exposed to toxic asbestos fibers. We can put you in touch with highly trained asbestos attorneys if you are considering filing a claim. Call us at 760-621-6147, for more information.