The USS Arnold J. Isbell was a Gearing-class destroyer. The ship remains the only one in its class to have been named after Arnold J. Isbell, a United States Navy officer who was killed at the end of World War II was approaching. The main activities of the USS Arnold J. Isbell were related to safely escorting other warships. In this sense, vessels of this type possessed multiple highly advantageous characteristics such as great speed and long endurance at sea. The ship has received a total of eight battle stars for its operations in the Korean War and in the Vietnam War. 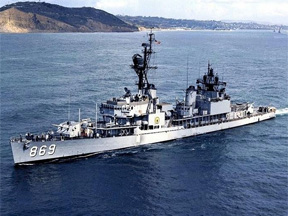 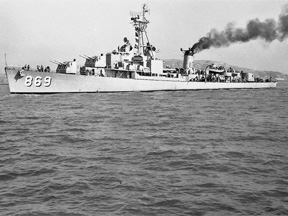 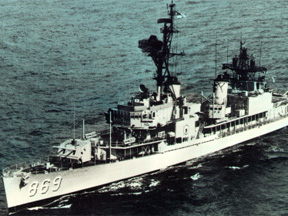 The USS Arnold J. Isbell was built by the Bethlehem Steel Company in Staten Island, New York. The ship had Mrs. Arnold J. Isbell as a sponsor and when it was placed in commission in January 1946, Commander Carlton B. Jones was assigned in command.
After completing shakedown in Guantanamo Bay in Cuba, the Arnold J. Isbell became a part of the Atlantic Fleet and conducted operations in the waters off East Coast. By January 1947, the ship was to report to the Pacific Fleet. During the year of 1948, the ship was involved in training that staged hunter/killer exercises for the Naval Reserve personnel. In February 1949, the ship entered Bremerton, Washington where it underwent upkeep work for two months.

As Communist forces took over Shanghai and Tsingtao, the Arnold J. Isbell was docked at their ports as the events occurred. Its mission at the time was to ensure the safe evacuation of the American consul and of his family from the city of Tsingtao. As Communists invaded South Korea in June 1950 leading to the outbreak of the Korean War, the ship was immediately ordered to the conflict zone, reporting to Destroyer Division 52 as it was making its way to Korea in November 1950. Upon arrival off the coast of Korea, the main activities in which the ship was engaged in were screening duty for Task Force 77, port visits at Taiwan as part of the U.S. 7th Fleet display of strength and escorting transportation vessels carrying units of the 45th Infantry Division to Hokkaido, Japan.

In May 1951, the Arnold J. Isbell joined Task Force 95 and launched strikes on Songjin, Chongjin, and Wonsan, focusing on troop concentrations hotspots and busy railroads. From February to August 1952, the ship re-joined Task Force 77, acting as a striking force. Briefly, the Arnold J. Isbell joined the Taiwan Strait patrol in the bombardment of Songjin. At the end of this mission, the ship went back to the United States where it underwent a three-month overhaul at Puget Sound Naval Shipyard in Bremerton, Washington.

In July 1953, the ship conducted more operations, particularly ones that involved patrol duty off the Korean coast alongside Task Force 95. In January 1954, the Arnold J. Isbell together with units of the Destroyer Division 112 was in charge with escorting prisoners of war that have been freed to Keelung, Taiwan. In February 1954, the destroyer entered the Mare Island Naval Shipyard at Mare Island, California for an overhaul that lasted a little over six months. During 1956, the ship operated in Yokosuka, Japan as a part of Task Force 77. In December 1958, the Arnold J. Isbell was deployed to WestPac where it was in patrol missions with the Taiwan Strait patrol and it also continued training off Okinawa, Japan, Guam, and Taiwan.

In February 1960, the vessel left for the Orient once again, making port visits at Pearl Harbor, Kaohsiung, Yokosuka, Hong Kong, and Subic Bay. On 20 April, the destroyer was ordered to rush to the rescue of a merchant vessel that was sinking in the waters of the South China Sea. The rescue operation ended with the Arnold J. Isbell having saved over 100 people and transporting them to Subic Bay. In June 1961, the ship was assigned a new home port at Bremerton, Washington and at the same time, it was stationed at Puget Sound Naval Shipyard for modernization work. The most notable change having been the rebuilding of the superstructure of the vessel by using aluminum-based materials.

In October 1962, the Arnold J. Isbell traveled with Destroyer Squadron 11 to the Far East to participate in three notable operations, Glass Door, Red Wheel and Sea Serpent. By March, the ship had more modernization work done receiving a drone anti-submarine helicopter system. In October 1965, the ship left for another Western Pacific deployment, beginning its series of tours in the Vietnam area. The Arnold J. Isbell was in charge of search and rescue operations until March 1966, the deployment having occasionally been interrupted by brief periods of upkeep and relaxation for the crew. In July 1968, the Arnold J. Isbell was headed to the Western Pacific once more to conduct operations off the coast of Vietnam as a gunfire support ship. In 1970, when the ship was on yet another Far East deployment, it was mainly stationed at Yankee Station in the Gulf of Tonkin performing search and rescue operations but also acting as gunfire support and escort for aircraft carriers. Early in 1974, the ship was placed out of commission and transferred to the Greek Navy under the designation Sachtouris (D-214) and it continued service well into the 1980s. The last accounts of the ship speak of it reportedly having been scrapped in Turkey in 2002.

The risk for the Navy personnel that did their service on board of the USS Arnold J. Isbell to have been exposed to asbestos is high. The explanation behind this increased probability is that in the period between the 1930s and the 1970s the U.S. Navy had a great demand for the fibrous mineral in the building of the ships themselves. Additionally, the equipment that was usually embedded with the toxic fibers ranged from electrical elements to boilers, turbines, pumps, and valves. Some of them only partially contained asbestos, while others, such as gaskets, for example, were made from asbestos in their entirety.

In this sense, some workers serving on the ship risked more exposure than others. For instance, the people that had to tend to asbestos-containing equipment located below the deck had to do their jobs in a significantly more polluted environment as it was difficult for fresh air to come by in those narrow spaces. The crew members that were in charge of maintenance work were exposed to asbestos on the regular, inhaling and swallowing harmful fibers consistently for long periods of time.

Since illnesses caused by asbestos exposure have a long latency period, the usual range being between one and five decades, the toxin affected many individuals before it was even diagnosed and studied by medical professionals. As a consequence, entire generations of people lived unaware of the fact that their service for the U.S. Navy might have been at a greater cost than they had anticipated.

Have You Been Exposed to Asbestos on the USS Arnold J. Isbell (DD-869)?

If you served on the USS Arnold J. Isbell and you suffer from an asbestos-related disease, your time in service for the U.S. Navy might be the cause for it. We can assist you in learning more about how Navy personnel was exposed to asbestos. Call us at 760.621.6147 for more information.