The USS Astoria (CL-90) was a Cleveland-class light cruiser. True to its design, the ship was of a small size but it was fully capable of transporting armor as it was expected of it in the same way an armored cruiser would do.

The USS Astoria was mainly involved in operations during World War II and it received six battle stars for its contributions in the conflict zone. The vessel was also awarded the Philippine Presidential Unit Citation along with the Philippine Liberation Medal. 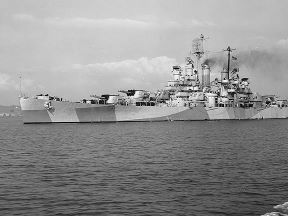 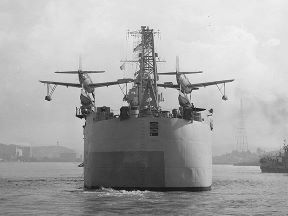 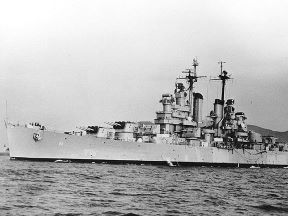 History of the USS Astoria (CL-90)

The USS Astoria was built by the William Cramp & Sons Shipbuilding Company in Philadelphia. The ship was christened by Mrs. Robert Lucas and on its commissioning day, 17 May 1944, it had in command Captain George Carroll Dyer.

The vessel completed shakedown in the Bermuda area by July 1944 and then it was headed to Hawaii but left immediately for Pearl Harbor where it ended up staying until 16 November when it had to move to Ulithi. At Ulithi, the ship joined Task Group 38.2 for further operations.

The Astoria and the units of the task group left on 11 December 1944 for its first combat cruise. The ship was mainly assigned screening duty to protect the carries from enemy aircraft. On 17 December the weather started to create difficulties for the fleet and the very next day the task group was faced with a typhoon that led to the sinking of the USS Hull, the USS Monaghan and the USS Spence, however, the Astoria handled the storm surprisingly well.

The ship left Ulithi again along with the task group to offer its support to the landings of troops off Luzon on 9 January 1945. The Astoria provided screening while the other units of the group launched strikes against military targets in Canton, Hong Kong and Formosa as well as in the Hainan Island.

By 18 February the fleet was renamed Task Group 58 and it was sailing to Iwo Jima. On 21 February the Astoria began gunfire in order to support the troops on the shore, an operation that lasted 26 consecutive hours. Afterward, the vessel sailed north to provide more assistance into launching strikes against Tokyo locations.

On 14 March 1945, the Astoria was again sailing with Task Force 58 fully engaged in preparations planning the attack on Okinawa. The ship participated in that operation for 80 days as the planes of the task group regularly launched strikes at military installations against Okinawa and a few surrounding islands.

The Astoria ended its missions off Okinawa in June 1945 as it docked in Leyte in the Philippines where it stayed the entire month to undergo reparations, offering its crewmen a period of rest and relaxation.

On 1 July 1945, the ship engaged in what would be its last operations in the war, providing screening to carriers who had their aircraft strike Japanese islands. On 15 August, after the Japanese forces surrendered, the Astoria was ordered to continue to patrol the area along with the rest of the task group, an assignment which lasted until 3 September when it was relieved and could return to the U.S.

In October 1946, the ship left for the Central Pacific and it conducted operations in the Marianas until the middle of February. Two years later, in October 1948, the vessel would return to the Far East and sail Asian waters for almost four months. By February 1949, the Astoria was steaming from Yokosuka to the United States.

The ship was decommissioned on 1 July 1949 and it was placed in the Pacific Reserve Fleet until January 1971 when it was sold for scrapping.

People that served in the U.S. Navy between the 1930s and the late 1970s have been exposed to a toxic mineral called asbestos. The substance could be found in mines all over the United States and it demonstrated an impressive capacity of resisting combustion. At the same time, asbestos was easy to work with so it did not take long for manufacturers to connect the dots and try adding it to other materials as the compounds would mix well and turn out fireproof.

The Navy especially saw asbestos as very appealing to their specific line of work since it was a resource for huge amounts of cheap insulation that seemed to work out perfectly with the high demand for the construction of new warships, particularly as War World II was rapidly exhausting supplies.

As asbestos was discovered to be highly damaging for the health of humans, Navy officials had ordered that all asbestos insulation be removed from ships, but those orders were given in the mid-1970s, meaning that a great number of veterans had already been exposed to the toxic fibers.

Breathing in asbestos, as medical records show, might lead to the development of a few cancerous diseases, most common of which are lung cancer, asbestosis and mesothelioma. These diseases are known to have a decades-long period of latency, therefore, if you served in the Navy prior to the 1980s, you should inform your doctor of this and get a relevant check-up.

Have You Been Exposed to Asbestos on the USS Astoria (CL-90)?

We can assist you in understanding how personnel was exposed to asbestos on the USS Astoria (CL-90). We can also put you in contact with former Navy colleagues. For more information, call us 760-621-6147.