The USS Athene (AKA-22) was an Artemis-class attack cargo ship. The ship was in active service for a total of 20 months. By design, the vessel was meant to be engaged mainly in the transportation of equipment, supplies and armed forces.

The USS Athene principally saw service in operations taking place during World War II, having been involved in the attacks and occupations missions against Iwo Jima and Okinawa. The ship was awarded two World War II Victory Medals among a few other awards.

Technical Features of the USS Athene (AKA-22) 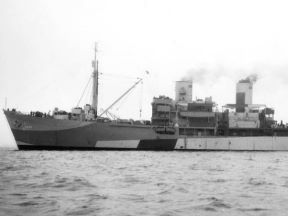 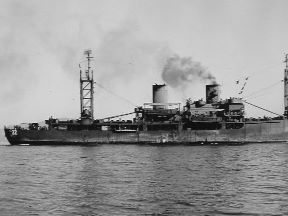 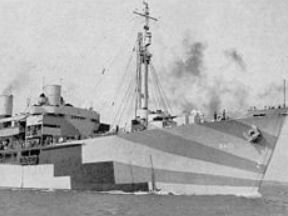 History of the USS Athene (AKA-22)

The USS Athene was built by the Walsh-Kaiser Co., Inc. shipyard in Providence, Rhode Island. Mrs. Emily Thornton christened the vessel and Commander Edward R. Nelson was assigned in command on its commissioning day on 29 September 1944.

For its shakedown training, the ship left in October for the Chesapeake Bay where it successfully completed trials at sea. By November, the Athene was sailing the area of Hawaii where it engaged in more training sessions.

In February 1945, the ship was steaming to Saipan to participate in exercises anticipating the U.S. invasion of Iwo Jima. By 16 February, the Athene had loaded on board servicemen of the 5th Marine Division that it was ordered to transport to Iwo Jima. On 27 February, the ship had disembarked all men and the very next day was headed back to Saipan.

The Athene was back on deployment in July 1945, sailing to the Philippines while briefly stationing at Eniwetok and Ulithi. As long as its involvement in the war lasted, the vessel carried men and equipment back and forth between the islands of the Philippine archipelago.

After the official surrender of the Japanese, the Athene left in September 1945 for Yokosuka. On 18 September, when a typhoon hit the region, the ship was docked at Tokyo Bay but still suffered a crash with a landing ship tank. In order to complete repairs, the vessel had to remain at Yokosuka until 1 October.

When cleared for sailing, the Athene steamed to the United States after having stopped at Saipan to load armed forces that were to return home, arriving at San Francisco in November 1945. In January 1946, the Athene was to report to Joint Task Force 1 that was overseeing the testing of the atomic bomb at Bikini Atoll.

Upon completing the operations at Bikini Atoll and returning to the United States, the ship was placed out of commission in June 1946. In August 1947, the vessel was taken off the Naval Registry and in 1960, it was sold for scrapping.

Asbestos Risks on the USS Athene (AKA-22)

The ships acquired by the United States Navy beginning with the 1930s up until the 1970s contained large amounts of asbestos, a mineral which is currently heavily regulated due to its medically attested toxicity to humans. Being strong but flexible at the same time, the asbestos fibers were poured into other materials to increase their durability. Asbestos is also inert chemically and physically and does not combust, which meant it could also be used in order to fireproof items.

These characteristics contributed to the decision of Navy officials to insulate vessels with insulation made out of 100% asbestos and it also encouraged them to have entire sections of the ship made of asbestos-containing materials such as the tiles on ceiling and floors, the boilers, the valves and the turbines, but also the pipes, which extended all throughout the ship.

The vibrations caused by a ship sailing at sea as well as routine deterioration would lead to asbestos dust being released into the air, polluting various areas of the vessel. When inhaled, asbestos fibers can reach the internal organs, most commonly, the lungs, the heart and the abdomen and cement themselves in the soft tissues irritating it.

Asbestos-related diseases are usually diagnosed after a few decades after the exposure had occurred, mostly because the symptoms can match a few other diseases, and unless the physician would be informed of a history of working with the toxic mineral, suspecting a more serious condition often comes too late.

Have You Been Exposed to Asbestos on the USS Athene (AKA-22)?

We can help you learn more about the dangers faced by veterans that have been exposed to asbestos. We can also assist you in finding your former shipmates. For more information, call us at 760-621-6147.