The USS Barney (DDG-6) was a Charles F. Adams-class guided missile destroyer. The vessel was named after Commodore Joshua Barney and it was the third in its class.

As the Cold War was building up, the USS Barney successfully navigated the Vietnam zone for a whole 7-month period at a time when combat operations were on-going, with only one member of the crew having been injured and losing a leg as a consequence. 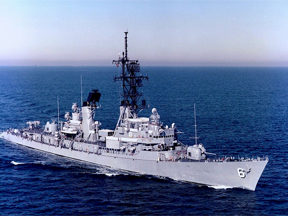 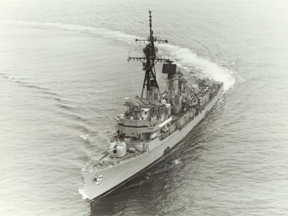 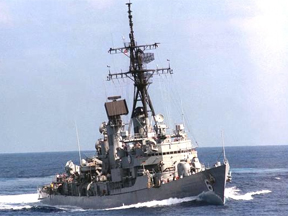 History of the USS Barney (DDG-6)

The USS Barney (DDG-6), initially bearing the designation DD-956, was built by the New York Shipbuilding Corporation at Camden, New Jersey. The vessel was sponsored by Mrs. Harry D. Wortman and it was commissioned on 11 August 1962 at the Philadelphia Naval Shipyard with Commander Joseph J. Doak in command.

On September 27th, the Barney had to go through a series of tests in the area of the Virginia Capes, while near Puerto Rico, the ship was to try out missile firing.

The shakedown cruise of the USS Barney (DDG-6) took place in 1963, just on New Year's Day, after which the vessel went back to Norfolk, paired up with a destroyer tender. The stay at Norfolk was followed by a complete post-shakedown overhaul at Philadelphia Naval Shipbuilding. On 31 May 1963, the Barney departed Norfolk and was in active duty alongside the Second Fleet in the US Navy. Afterward, the vessel was engaging in operations on the Mediterranean Sea with the Sixth Fleet for a period of 5 months. Part of its mission during that cruise was to make various port visits and to take part in training exercises, just as the units from the Sixth Fleet had to do. In March 1964, the Barney departed back to Norfolk where it joined the activities of the Second Fleet once again. Later that year, in September, the ship performed miscellaneous exercises as part of a NATO training.

The USS Barney (DDG-6) had the start of her second tour in the Mediterranean on 15 February 1965. The following 5 months the ship made port visits in France, Italy and Turkey and it also participated in what was referred to as Operation "Fairgame III", which was an anti-submarine warfare exercise coordinated with the French Navy. Following the training, the Barney sailed to Norfolk Naval Shipyard in order to complete a much-needed overhaul, ranging from reparations and maintenance work to procuring the necessary provisions.

After the overhaul, the warship engaged in a missile firing exercise that took place near Puerto Rico on the Atlantic Fleet Weapons Range. The USS Barney left Norfolk in 1967 for almost 7 months. During that time, the ship had its only cruise in an area of combat, as the Vietnam War was taking place.

On 19 September 1967, the Barney sailed back to Norfolk and began an interval of upkeep period. After being back on active duty, the warship engaged in operations along the Atlantic seaboard. However, in 1968, the Barney yet again left Norfolk to join the Sixth Fleet for the 3rd time.

The USS Barney briefly returned to its homeport, Norfolk, on 22 July 1968 only to then leave to join the Second Fleet. Its operations with the Second Fleet mainly included winter training on the West Indian waters that were taking place in January 1969 and also anti-submarine warfare exercises that occurred from late February to the beginning of March along the coast of Florida. After completing the winter training, the vessel sailed to Norfolk on 5 March 1969 in order to prepare for an overseas deployment.

In April that same year, the Barney participated yet again in an anti-submarine warfare exercise that was this time around coordinated between American, Spanish and Portuguese naval forces. The training continued with hunter-killer exercises in partnership with the USS Wasp. In the period between the 14th and the 22nd of May, the guided missile destroyer steamed to Portsmouth, England to participate in the festivities celebrating the 20th anniversary of NATO. On June 2nd the Barney entered the Mediterranean again.

On 10 October 1969, the USS Barney returned to Norfolk and began its regular period of upkeep. In December, the ship was stationed at the Norfolk Naval Shipyard for the customary overhaul. After completing maintenance in June 1970, the Barney left its homeport for the West Indies in order to resume training. By September, the ship started its missile firing assignment. However, these latter exercises were abruptly interrupted by the ship being urgently called to duty in the Eastern Mediterranean to help control the aftermath of the Jordanian crisis sparked by an open confrontation between the Jordanian Army and PLO guerrillas. The USS Barney sailed the conflict zone of the Mediterranean until there were visible signs of the crisis declining at the beginning of November. The vessel accompanied the Sixth Fleet steaming to ports in Spain, Italy and Malta, and in December 1970 the Barney returned to Norfolk for holiday stand-down.

In 1971 the ship started to prepare for another cruise with the Sixth Fleet. While in the area of the Mediterranean with the Sixth Fleet, the Barney and other ships from the fleet mostly focused on accomplishing tasks distributed by the John F. Kennedy, an aircraft carrier. The USS Barney made stops at European, but also African and Middle Eastern ports. Often its main assignment consisted of intelligence surveillance in regard to the Soviet ships in its vicinity. On 29 June 1972, the ship arrived back in Norfolk, and after completing its routine overhaul, it left its homeport again.

The Barney was to join the NATO forces in 1973. While doing just that, the deployment brought about significant improvements to the vessel: a power plant conversion, from 600 PSI to 1200 PSI, and also the conversion of fuel, from what was called "black oil" to Navy distillate fuel. The Barney was on duty alongside NATO forces for about 5 months, time in which the ship had relevant contributions in 3 multinational operations. In one of them, the vessel steamed to the Baltic area where it collected information about Soviet warships. In another one, the Barney reached and crossed the Arctic Circle, and obtained the Blue Nose as an honorary consequence. Its third maneuver took place in the North Sea. While sailing the areas of Kattegat and Skaggerak, located between Denmark and Sweden, at a speed of about 21 to 24 knots, the propellers of the ship struck bottom. Engineering immediately called for a full stop when they observed water abundantly flowing into the engine room.

Despite them being on high alert throughout the rest of the cruise, the actual extent of the damage was unknown to the crew until an underwater examination was done in Norfolk. The negative review demonstrating serious damage to both propellers prompted the Barney into an irregular shipyard overhaul, since the result deemed the vessel unable to be active on duty. The Barney finished its time with NATO forces under very restricted speed limits and had to head back for major repairs as a matter of urgency.

The overhaul was finished on 24 February 1975, and for the rest of the year, the ship performed post-overhaul refresher drills. Two years later, in 1978, the Barney became a part of the Middle East Force. As part of its duty, the ship had to engage in training exercises and visit East African and Persian Gulf ports for a few months. The vessel also continued to gather information on Soviet ships that were sailing near its course. During the 1980s, the USS Barney once again joined the Middle East Force and had much of the same previous itinerary from the end of the 1970s, steaming to East African and Persian Gulf Shores. On 17 December 1990, the Barney was decommissioned, and on 20 November 1992, it was taken out of the Naval Vessel Register. On 15 April 1994, the ship was sold for scrapping. However, in February 2006 it was resold for disassembled.

One could have possibly been exposed to asbestos, an extremely dangerous mineral, either by being a part of the crew serving in the Navy, but also by being implicated in some way in the process of building or dismantling ships.

It is a known and proven fact now that the military made use of the toxic material in nearly everything that composed its infrastructure. The highly hazardous habit continued well into the late 1970s. Navy vessels contained asbestos in pipes, for insulation purposes, engine rooms were heavily cushioned with the mineral due to its impressive heat resistance and the very floor tiles had asbestos in them. In areas located below the deck, by design poorly ventilated spaces, asbestos would fill the air and personnel would inhale the toxic fiber. In fact, crew members came in contact with significant amounts of asbestos quite often. If they were not doomed to breathe the poisonous air below the deck, then they were either building or dismantling ships, both processes discharging immense quantities of asbestos fibers into the air.

Out of all military veterans, it is those of the Navy that make up the highest percentage of people that nowadays suffer from mesothelioma or other asbestos-related diseases.

Have You Been Exposed to Asbestos on the USS Barney (DDG-6)?

We can offer you guidance in sorting out your particular experience with asbestos. We can also help you get in touch with your former shipmates. Contact us at 760.621.6147 for more information.