The USS Benjamin Stoddert (DDG-2) was a Charles F. Adams-class guided missile armed destroyer. The name of the ship honors Benjamin Stoddert, the first United States Secretary of the Navy, active in the period between 1798 to 1801. The USS Benjamin Stoddert, as all the ships from this particular class, distinguished itself with its speed at sea, but also with its capabilities to defend the fleet from short-range attackers during escort duty. The Benjamin Stoddert participated in operations in conflict areas from Vietnam, earning nine battle stars for its service during those deployments. 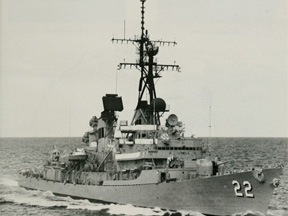 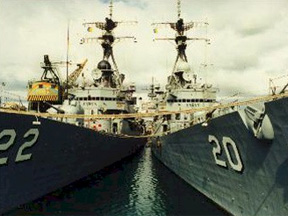 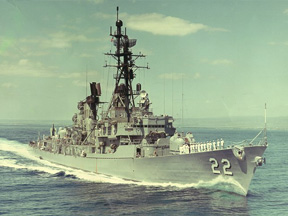 The USS Benjamin Stoddert was built by the Puget Sound Bridge and Dry Dock Company in Seattle, Washington. Mrs. Nancee Ravenel sponsored the ship and Commander Walter Megginness was assigned commanding officer when the ship was placed in commission. By design, the ship was mainly developed for participation in aircraft missions and therefore, its two-month shakedown was focused mainly on the testing of its anti-aircraft missile system, with successful firings in Hawaii. After the exercises were finished, the ship reported to the Pacific Fleet starting with August 1965. The Benjamin Stoddert joined Destroyer Division 112 in preparation for the first deployment with the 7th Fleet to the South China Sea for missions off the coast of Vietnam. When on December 1965 the ship arrived at Yankee Station, it was to report to Task Force 77 as part of its contribution to Operation Rolling Thunder. The ship also engaged in radar control activities and in combat air patrol well into January 1966, targeting logistical bunkers suspected of being controlled by the Viet Cong.

In March 1966, the crew on board of the Benjamin Stoddert was granted six days for recreational activities, leaving the combat zone and docking at Hong Kong. Later that month, the vessel reported to Task Force 77 while operating in the South China Sea. After heading to Australia to participate in the annual "Coral Sea Celebration" in April 1966, the Benjamin Stoddert steamed to Pearl Harbor where it continued to engage in local operations for the rest of the year. These local missions were mainly focused on anti-submarine exercises, carrier screening and shore bombing as a way to keep being readily available for its next deployment with the 7th Fleet.

By April 1967, the ship was involved in a Sea Dragon patrol in the waters of the Gulf of Tonkin, forming a task unit with Saint Paul (CA-73) and Ault (DD-698). Collectively, the newly formed task force patrolled the coast of North Vietnam and targeted two enemy logistics warships on 5 May, of which one they sunk, and the other they seriously damaged. During that same day, the vessels engaged in a bombing operation off the North Vietnamese coast that had been prepared in advance. Over time, this strategy of searching for enemy ships in the first half of the day and bombing them in the second half became a daily routine for the Benjamin Stoddert and it would later be referred as Sea Dragon patrolling.

The ship was engaged in local missions off the coast of Hawaii until 1968 when it entered the Pearl Harbor Naval Shipyard in order to undergo a proper overhaul that would take care of the issues that could not have been fixed during the brief upkeep periods that occurred at the time of combat. In the middle of May 1969, the Benjamin Stoddert docked at Subic Bay where it had its equipment improved. For instance, the vessel was fitted with an upgraded reconnaissance apparatus which further allowed it to sail to the Sea of Japan and replace Dale (DLG-19) from its position in the Pacific Area Reconnaissance Program. For an eight-week period, the vessel was in charge of collecting intelligence off Korea. At the end of this interval, in August, the ship steamed south to participate in combat missions. In August next year, the Benjamin Stoddert left for the Yankee Station again to assist with screen services and plane guard duty. In the same time period, the ship participated in search and rescue operations in the waters of the Gulf of Tonkin.

In January 1971, the vessel was part of a three-day lifeguard duty at Yankee Station before returning to Pearl Harbor. On its way back, the ship made port calls at Guam, Midway and Taiwan and by February, its course was finished. In May 1971, the ship moved to the Pearl Harbor Naval Shipyard where its missile system was upgraded. During the same overhaul, the ship had maintenance work done to its hull and sonar dome. The Benjamin Stoddert left for a deployment in March 1972 with the destination having been the Tonkin Gulf. Upon its arrival there, the ship joined other units of the 7th Fleet in firing against North Vietnamese troops. Eventually, a few days later, the vessel became part of Task Unit 77.1.0 to participate in Operation Freedom Train, which represented multiple attacks on the North Vietnamese logistical infrastructure. The firing operations were so intense at the time that at one point, the Benjamin Stoddert was recorded to have dropped 1,009 rounds in a 24-hour interval. Returning to the waters of the Gulf of Tonkin in July 1972, the ship began a three-week period of fire operations alongside Task Unit 70.8.9 off the cost of Vietnam. By that time, however, the South Vietnamese military had been successfully driving North Vietnamese forces back, which meant that the U.S. naval campaign against North Vietnam started to also wind down a bit.

On January 1973, there was a ceasefire agreement that was signed in Paris and, therefore, American military started to withdraw from South Vietnam. However, patrolling the area continued, with port visits to Kaohsiung, Taiwan and Yokosuka, Japan, arriving off the South Vietnamese coast by June. Since combat missions were no longer required, the Benjamin Stoddert was there in support of the agreements signed in Paris, engaging mainly in anti-air warfare duty in the Gulf of Tonkin. During the first three months of 1974, the ship was involved in a set of maintenance programs and inspections. Thus, the Benjamin Stoddert was stationed at Pearl Harbor undergoing complex propulsion repairs and afterward conducting local exercises.

In February 1977, the ship participated in RIMPAC 77, an international naval training exercise that took place in the Hawaii area. After successfully finishing the exercise, the vessel departed for the Western Pacific for the first time since the Vietnam War ended. Naturally, the Benjamin Stoddert conducted very different operations this time around in the area, focusing mostly on being ready to respond to actions instigated by Soviet submarines and warships in the region. In July 1977, the ship participated in an anti-submarine warfare exercise in which it was joined by units of the South Korean Navy. In January 1980, the ship entered Pearl Harbor Naval Shipyard in order to begin a complex overhaul that had the vessel dry-docked for five months. For another five months, the guided-missile was put to various sea trials with the intention of testing the new weapons.

In February 1982, the Benjamin Stoddert left for the Philippines and immediately upon arrival the ship was engaged in anti-aircraft and anti-submarine warfare training. After a week in the Subic Bay area, the ship sailed to Korea where it took part in exercise Team Spirit 82 between 28 and 30 March. By June, the tensions between the Soviet Union on one hand and the West, on the other hand, had increased in the aftermath of Israel invading Lebanon. As the Benjamin Stoddert was sailing the South China Sea while it was headed to Subic Bay, the Americans received news of Soviet aircraft shadowing their naval courses.

In March 1984, the vessel docked at the Pearl Harbor Naval Shipyard to undergo a major overhaul. The maintenance period lasted 15 months and by the end of it, the ship had installed new fire-control systems but also the Naval Tactical Data System (NTDS) and the Integrated Automated Detection and Tracking System (IADTS). After completing the overhaul in July 1985, the ship dedicated the rest of the year to local missions and inspections, including a joint anti-submarine warfare exercise with units of the Australian and New Zealand Navy.

In September 1991, the Benjamin Stoddert was preparing for inactivation, unloading all its ammunition and fuel reserves. By December, the ship was placed out of commission at Pearl Harbor. Although the initial plan for the vessel was to have it scrapped, it took on water and it sank as it was towed to Texas where the scrapping was supposed to happen.

From the 1930s to the late 1970s, the U.S. Navy used a mineral called asbestos in the construction materials that were destined for the building of ships and of ship equipment. It was only in the 1970s when enough medical evidence was gathered to permit authorities to regulate the asbestos usage that had taken over the market in the United States.

In the case of the Navy, orders were given for the vessels to be stripped of all asbestos insulation, since the mixtures utilized in insulating jobs were almost entirely made of asbestos fibers. The mineral was lightweight, it had a low electrical conductivity and it was also highly flexible, making it an ideal choice for at sea operations.

Although the Navy acquired the asbestos-containing materials with the primary intention of keeping its personnel safe, the result of that decision turned out to have been quite the opposite. Asbestos fibers have been proved to be extremely toxic, creating a constant irritation in the thin tissue surrounding the lungs, the heart or the abdomen from the moment it is inhaled.

The human body does not possess the abilities to naturally get rid of the sharp asbestos fibers and, therefore, the inflammation begins as soon as the particles have been breathed in and last for the entirety of the person's life. In the majority of cases, however, this inflammation will develop into a cancerous disease after a few decades during which the fibers had been consistently disturbing the internal organs.

Have You Been Exposed to Asbestos on the USS Benjamin Stoddert (DDG-22)?

If you believe that the illness you are suffering from was caused by the fact that you worked with asbestos while serving on the USS Benjamin Stoddert, we can put you in touch with skilled asbestos attorneys. To learn more, call us at 760.621.6147.