The USS Berkeley (DDG-15) was a Charles F. Adams-class guided missile destroyer. The name of the ship was inspired by Major General Randolph C. Berkeley who served for the United States Marine Corps and was awarded the Medal of Honor for the way in which he conducted his operations during the United States occupation of Veracruz in World War I.

The primary task for which a guided missile was designed for was the launching of guided missiles. At the same time, however, due to their main function inevitably landing it in areas of combat, the vessel was also equipped with powerful anti-aircraft and anti-submarine systems as well as with anti-surface machinery. 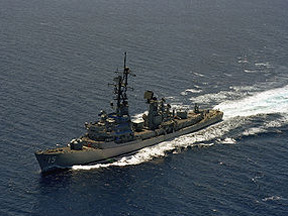 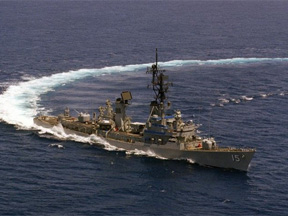 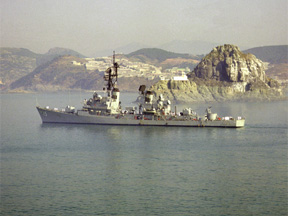 History of the USS Berkeley (DDG-15)

The USS Berkeley was built by the New York Shipbuilding Corporation at Camden, New Jersey. Mrs. James B. Berkeley acted as a sponsor of the ship and Commander Wyatt E. Harper was assigned commanding officer when the vessel was placed in commission on 15 December 1962. The ship was built to mainly cover anti-aircraft operations, and for this reason, the vessel was engaged in six weeks of training that focused solely on the testing of its TARTAR missile system. However, the well functioning of the communication system and gunnery was not neglected. In 1963, the Berkeley joined Destroyer Division 12, and for the rest of the year, it operated in the Long Beach area.

For the first ten weeks of the year of 1954, the ship was sailing in Southern California and training for a deployment to the Far East. By March, the vessel left the area and joined other destroyers of the 7th Fleet. Together, the task group sailed to East China in order to participate in training exercises for a month. In the month of July in 1964, the task group were ordered to steam to the South China Sea to rendezvous with even more units of the US Navy in the waters of South Vietnam. Together they patrolled the area in an effort to offer some kind of protection from North Vietnam attacks to the South Vietnamese coast. On 2 August, the ship was in charge of anti-air operations on behalf of the task group, as other vessels were launching airstrikes against missile boats from North Vietnam. The Berkeley continued to offer screening services to the other warships as the American forces were gathering more and more in the region of Southeast Asia.

The Berkeley left in late November 1965 for the Yankee Station where it arrived on 16 December joining Task Force 77 in supporting Operation Rolling Thunder. The warships worked together to disrupt the flow of artillery and of other supplies that were en route to the Viet Cong insurgents located in the south. By April, the ship departed to Subic Bay where it began preparations for following port calls in Australia and New Zealand. After participating in the Snatch Block exercise in early January 1967, the Berkeley was then engaged in a three-month preparation for another tour in the Far East, including screening duty and anti-submarine warfare exercises but also upkeep inspections. On 24 May, the ship arrived at Subic Bay and from there to the Gulf of Tonkin. Upon arrival, the vessel accompanied Task Unit 77.1.1 for a Sea Dragon kind of patrol, which was characterized by search operations during the mornings and launching strikes in the evening.

For the first three months of 1969, the ship was in preparations for a scheduled extensive overhaul, which began on 27 March when the vessel entered the Long Beach Naval Shipyard. As a result of this overhaul, the Berkeley received new communication systems as well as new weapons. In August 1971, the vessel went back to the combat zone in Vietnam where it was ordered to a naval gunfire mission that had it cruising off the Cua Viet base for three weeks. At the end of this period, the ship had a brief stop at Subic Bay from where it sailed directly to Long Beach, arriving there in September. In April 1972, the ship was commanded to rush to Vietnam as a matter of urgency, and after 72 hours of speedy preparations, the ship left Long Beach. After arriving in the Gulf of Tonkin, the Berkeley joined other units of the 7th Fleet in attacks against North Vietnam. At the end of the bombardment mission, the ship participated in Operation Pocket Money, the first time naval mines had been used against North Vietnam military forces.

In January 1973, the ship underwent another complex overhaul during which it received a sonar upgrade, two new gun mounts and the new tactical data system. After having been dry-docked for five months, the vessel had been moved to the pier side for its installations to be properly set up, reaching completion on the 1st of November. In January 1974, the ship left Bremerton. Since the ceasefire agreement in Vietnam, the missions of the Navy in the area were focused on maintaining overall naval readiness, which was significantly different than the combat operations that occurred during the previous Vietnam deployments. While sailing the Indian Ocean in 1974, a few American vessels, among which was the Berkeley, were ordered to make their presence known in the area as a response to the growing number of Soviet ships. The vessel joined Task Group 77.6 and as a result, it was involved in 11 days of missions alongside British, Iranian and Pakistani naval forces.

In June 1977, the ship was stationed at the Puget Sound Naval Shipyard in order to receive new turbo-generators, but also a satellite communication system. After the dock trials were completed in May 1978, the ship did testing of its weapons and of its new equipment for the rest of the year. After the President of South Korea, Park Chung Hee was assassinated in October 1979, the task group did patrol missions off the coast for a few weeks until the crisis stabilized. By November 1979, the task unit was commanded to offer its support to the rescue efforts aimed at the takeover of the American embassy in Tehran, Iran, and by December, the warships were already taking positions in the south area of the Iranian coast.

In 1981, the Berkeley among other units of the 7th Fleet took part in the SEA SIAM 81-2 exercise. Afterward, the ship participated in joint exercises with the Royal Thai Navy, focusing on anti-submarine warfare and tactical communications. Next, the vessel joined the Kitty Hawk battle group in the waters of the Subic Bay. In January 1984, the Berkeley joined Carrier Battle Group Bravo and left for the Western Pacific. Early March, the ship sailed to Busan, formerly known as Pusan, in South Korea to take part in Exercise Team Spirit 84. In 1986, the ship left for the Far East once again, arriving at Busan in South Korea on 1 September 1986. By the middle of the month, the vessel was engaged in anti-submarine warfare exercises with units of the Japanese Maritime Self-Defense Force. The following month, it repeated the same exercise with units of the South Korean Navy.

For nine months of the year 1989, the ship was engaged in training exercises while also undergoing maintenance availability at the Continental Marine Shipyard from April to July. By November, the Berkeley was back on the sea in response to the coup attempt that had been planned against the Aquino government in Manila. In the middle of July 1990, the Berkeley left for a week to participate in law enforcement mission with the United States Coast Guard. The purpose of the operations was to impede drug smuggling. The operations with the Coast Guard continued into February 1991 in Central America. With the end of the Cold War came budget cutbacks which gave the Navy enough of a basis to agree to a transfer of the Berkeley to the Greek Navy. The transfer occurred on 1 October 1992, with the ship continuing operations under the Themistoklis (D221) designation. In February 2002, the ship was placed out of commission at Salamis in Greece and in February 2004, it was sold for scrapping.

A toxic mineral called asbestos was used in shipbuilding in the 20th century U.S.A., particularly in the first half of it when the World Wars were taking place. The material was a fire retardant while being flexible and durable at the same time. Asbestos reached a peak in demand at the time World War II was occurring since the military was in need of abundant and cheap resources that would still offer some kind of protection to those who served.

Especially for the U.S. Navy, the mineral was a great choice since it offered them the less likely scenario of the systems on board erupting into flames while deployed at sea for an affordable price. The mineral was being mined all across the United States and the Navy acquired it in huge amounts, essentially coating the ships in mixtures containing the fibers, taking advantage of the property of asbestos to act as an insulator.

Whether in the boiler room, the sleeping quarters or the flooring on deck, asbestos was everywhere. The spaces below the deck were arguably more dangerous since the narrow areas would not allow for fresh air to come by and so if any type of work would create asbestos dust than it would be inhaled by the workers on the job there. Servicemen that did maintenance work, mechanics, steelworkers, pipe fitters, among others would have been the most exposed to the toxic fibers and the most at risk of developing a cancerous disease due to the exposure.

Have You Been Exposed to Asbestos on the USS Berkeley (DDG-15)?

Learn more about how people serving in the U.S. Navy were exposed to asbestos and about the consequences their service in an asbestos-infused environment has had on their health. Call us at 760.621.6147 for more information.