The USS Bexar (APA-237) was a Haskell-class attack transport. By design, the vessel was meant to carry cargo and troopship. 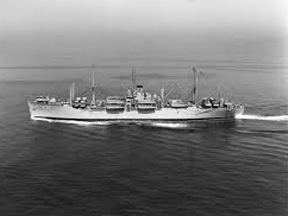 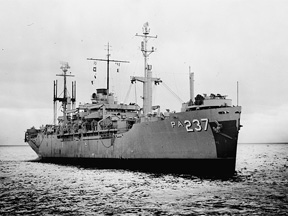 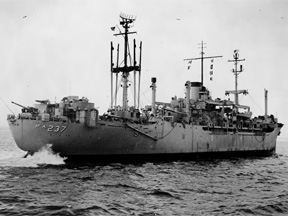 The USS Bexar was built by Oregon Shipbuilding in Portland, Oregon. The ship was commissioned on 9 October 1945, with Captain R. H. Wilcox assigned as commanding officer. After completing shakedown exercises, the Bexar took part in Operation Magic Carpet. Until February 1946, the ship transported troopship from the Pacific. Still, in the early part of 1946, the Bexar was commanded to Pearl Harbor in order to train for Operation Crossroads.

In the month of June, the ship was sailing to Bikini Atoll, where Operation Crossroads was taking place. The operation was meant to test the effects atomic bombs have on warships. More than 200 vessels participated in the initiative with 75 of them having been assigned as targets. The role served by the Bexar in the operation was that of providing supplies to the rest of the fleet. In 1947, the Bexar accompanied Amphibious Force units from the Atlantic Fleet at Norfolk, Virginia.

In 1948, the ship was on a Mediterranean deployment from January to February. Then, starting from March 1948 to July 1950, the vessel took part in training exercises off the East Coast. In 1950, the Bexar left Norfolk for Mediterranean waters again. By August, the ship had embarked Marines and was sailing to Japan. Immediately after, the ship was ordered to Korea, where it contributed to the landings at Inchon in September and Wonsan in October. In order to support the operations in Korea, the Bexar was commanded on two more deployments in the Far East, one lasting from August 1951 to May 1952, and the other from July 1953 to December 1953. During the 1953 tour, the Bexar also participated in Operation Big Switch, with its focus being the transportation of prisoners from Koje Do to Inchon, Korea. From October 1954 to April 1955, the Bexar was sailing Far East waters once again. Its most notable operations were related to the evacuation of the Tachen Islands. The ship was involved in the Vietnam War for three years until 1969.

The USS Bexar was placed out of commission in August 1970 and taken off the Naval Vessel Register on 1 September 1976. In June 1982, the vessel was sold for scrapping.

Until the late 1970s, the U.S. military in general, and the Navy especially were known to have used asbestos-embedded materials in the warship building and repairing processes. Asbestos was the popular choice because of its acknowledged resistance to high temperatures and accessibility.

Suspected even back then but brought to light after the 1970s was the fact that the mineral in question was extremely harmful to the health of those that inhaled or ingested the fiber. There was asbestos in cement, in the floor and pipe insulating materials, gaskets, valves. It was especially dangerous for the personnel working in narrow spaces, like the rooms located below the deck because of the poor ventilation in those areas.

However, those working below the deck jobs besides having been exposed themselves also exposed the rest of the crew by carrying the toxic fiber around the ship on their clothing. If someone you know served in the U.S. Navy and suffers from an asbestos-related disease, you should consider ways to recover damages.

Have You Been Exposed to Asbestos on the USS Bexar (APA-237)?

We can help you understand in a comprehensive manner the way one could have been exposed to asbestos in the U.S. Navy. If you want to pursue your case legally, we can put you in touch with asbestos lawyers. Call us at 760.621.6147 for more information.