The USS Boston (CA-69) was a Baltimore-class heavy cruiser. By its very design, the ship was capable of high speed for long periods of time, covering great distances.

In recognition of its outstanding service during World War II, the USS Boston was awarded ten battle stars, and five more were received for its accomplishments during the Vietnam War. The Boston also received the Republic of Vietnam Gallantry Cross, a military decoration honoring its heroic efforts during the war. 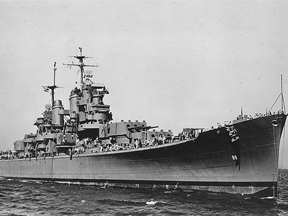 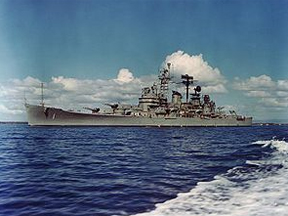 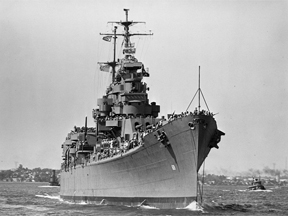 The USS Boston was built by Bethlehem Steel Company, Fore River Shipyard in Quincy, Massachusetts with Mrs. Helen Noonan Tobin as a sponsor. The ship was commissioned on 30 June 1943 and it was commanded by Captain J.H. Carson. As it completed its shakedown, the Boston was ordered to the Pacific Fleet and on 6 December 1943, it was sailing the waters of Pearl Harbor. In January 1944, the vessel became part of Task Force 58 which led to its involvement in the invasions of the Marshall Islands.

In fact, the Boston supported all sorts of invasion operations such as the attacks on the Palau Islands and Western Carolines from March to April, the assaults on Jayapura, formerly known as Hollandia and New Guinea throughout April, the attacks on Truck, Satawan Island, Saipan, and it was involved in the Battle of the Philippine Sea. The Boston was a part of other successful campaigns, such as the raids in Guam, Morotai, the famous Battle of Leyte Gulf, and it even bombarded Japan itself.

After a long time engaged in combat operations at sea, the Boston finally docked at Long Beach, California for an overhaul on 25 March 1945. After completing repairings, the ship accompanied Task Force 38 yet again for assaults on Japanese Islands during August 1945. Even after the surrender of the Japanese, the Boston was ordered to keep sailing Far East waters to solidify occupation. After returning to the United States in 1946, the ship was decommissioned at Puget Sound Naval Shipyard on 12 March 1946. Although the beginning of the Korean War prompted the activation of many vessels that had been decommissioned, the Boston was not one of them. Instead, the ship was due to design modifications with it being classified as CAG-1 on January 1952. On 1 November 1955, the Boston was recommissioned and shortly after it left for the Mediterranean. In September 1958, the Boston joined the 6th Fleet again and the deployment included active duty in the Lebanon crisis. For almost a decade, the ship was assigned missions mostly in the Mediterranean while also undergoing various training exercises in the Carribean and Northern Europe.

After 15 years, the Boston returned to the Pacific for the first time in April 1967 to support the 7th Fleet in combat. Coordinating the attacks on Vietnam with the rest of the fleet, the Boston was a part of the Sea Dragon operation set to destroy Vietnamese communications and supplies. In June 1968, as the Boston was still engaged in firing against logistics targets from North Vietnam, the ship was accidentally attacked by USAF jet aircraft. The Boston only had a few insignificant damages to the ship, but another Australian vessel that was also there as the accidental attack occurred lost two sailors as a result of the incident.

After its final Vietnam tour, the ship was decommissioned at the South Boston Naval Annex in Boston, Massachusetts on 5 May 1970 despite talks of preserving the vessel as a museum. In January 1973, the ship was taken off the Naval Vessel Register and in March 1975, it was sold for scrapping.

Since all throughout the first half of the 20th century, the Navy was in need of as many ships as possible as fast as possible in order to be able to command complex sea operations, it was vital that the vessels were constructed in the most efficient and affordable way. From this perspective, it becomes obvious why the government made the choice to invest in questionable resources to get the job done.

A fibrous mineral called asbestos was the saving grace when it came to availability and costs. Additionally, it had incredible fireproofing qualities. As a result, asbestos was incorporated in large sections of ships, especially in areas in need of heat-resistant materials. Although even at the time when asbestos was put on a pedestal by most, there were qualified people expressing concern in regard to the effects of the mineral on the health of humans. Still, it was only late in the 1970s that confirmation of the toxicity of asbestos reached both the general public and lawmakers.

However, great damage had been done all those years during which the now acknowledged fact was only a speculation, and people who served in the Navy are at great risk of developing cancerous diseases due to prolonged asbestos exposure.

Have You Been Exposed to Asbestos on the USS Boston (CA-69)?

We can assist you in better understanding your experience with asbestos. If you think you would like to file a claim, we can put you in touch with asbestos attorneys. To learn more, call us at 760.621.6147.