The USS Cambria (APA-36) was a Bayfield-class attack transport and its acquisition by the U.S. Navy was single-handedly motivated by a need to engage more resources as War World II was intensifying.

The USS Cambria (APA-36) was named after a county in Pennsylvania, Cambria i.e. The principal activity of the ship consisted of transporting troops. By design, this type of vessel carries on board its own landing craft, which speaks of the great level of independence in action the ship was capable of when involved in operations. 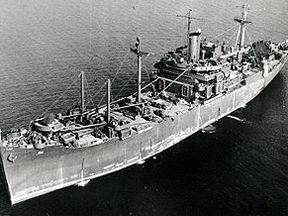 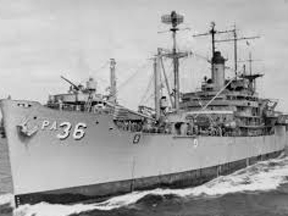 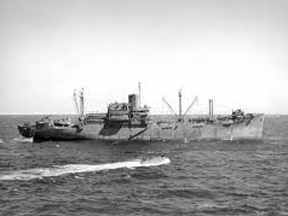 History of the USS Cambria (APA-36)

The Cambria was built by the Western Pipe and Steel Company, San Francisco, California and it was sponsored by Mrs. W. Griffin. The ship was only partially commissioned the very day it was acquired by the Navy, 4 May 1943, with Lieutenant Commander William S. Baker commanding. The ship had to travel to New York for it to be decommissioned and converted into an attack transport. On 10 November 1943, a second commissioning occurred with Captain Charles W. Dean in command.

The Cambria left for Pearl Harbor on 11 December 1943, and it arrived precisely on the day of the New Year. The ship underwent strict training exercises for 3 weeks, after which it departed on 23 January 1944 for the invasion of the Marshall Islands. During that operation, the vessel filled the role of flagship for Majuro Attack Group. After completing overhaul at San Francisco, California and engaging in refresher exercises in the Pearl Harbour area, the Cambria departed for the invasion of the Marianas on 30 May 1944. The ship was part of the attack on Saipan beginning on 15 June. The vessel took on board over 700 casualties in total. From 24 July to 1 August, the vessel led the invasion of Tinian during which it offered assistance to another 613 casualties.

While in Honolulu, the Cambria embarked troops and armament and departed for the invasion of the Philippines where it arrived on 3 October, joining the Southern Attack Group. The ship was especially active when the invasion landings occurred on 10 January 1945 at Lingayen Gulf. After completing its assignments there, the Cambria immediately started rehearsals for the invasion of Okinawa. After dropping the troops at Okinawa on 1 April 1945, the Cambria sailed to San Pedro, California where it arrived on 3 May and where it began a complex overhaul process. After completing the overhaul, the Cambria was in charge of the redeployment of troops in the Far East, including its contribution to the Magic Carpet Operation.

In February 1946, the Cambria was assigned a new commanding officer, Captain Edward L. Woodyard, and a period of training in its homeport followed until it was decommissioned on 30 June 1949. The ship was brought to active duty again when the Korean War began in 1950, with its most notable actions being alongside the 6th Fleet in the Mediterranean. In 1958, the Cambria was supporting the operations conducted by the 6th Fleet in Beirut, Lebanon. As the 1960s came about, the ship was part of the Cuban Missile Crisis. Due to its efforts, the ship was awarded the Armed Forces Expeditionary Medal. The vessel also received 6 battle stars for its actions during World War II.

The Cambria was decommissioned on 14 September 1970 and it was taken out of the Naval Vessel Register on 1 September 1971. The ship was then sold to Carribean Marine Inc and in the next year, it was scrapped.

Quite a few spaces both on deck, but especially below deck turned out to have had exposed Navy personnel to asbestos, a toxic fiber used in virtually every aspect of shipbuilding due to its abundance, durability and low cost.

Vital areas on the ship, such as the engine and boiler rooms contained high amounts of asbestos-embedded materials due to its fireproofing qualities. When left unbothered in compounds, asbestos does not constitute a threat, however, the mineral is dangerous when it is disturbed and it becomes airborne and easy to inhale.

On a ship, asbestos was rarely left undisturbed, as regular maintenance work had to be performed even if there were no apparent issues with the system at all. As a consequence, asbestos fibers were constantly released into the air putting the crew at risk. In the present day, more than 30% of the patients diagnosed with mesothelioma, a type of cancer caused by asbestos exposure are veterans.

Have You Been Exposed to Asbestos on the USS Cambria (APA-36)?

"I served aboard the Cambria from 1956 until 1960. I was an Engineman 3rd class and worked in the evaporators, where there were tons of pipes covered with asbestos, mostly falling off. I remember having a vent by my bunk with loose asbestos hanging from it, and by my head." - Richard L.J.

We can help you better understand the exposure risk to a toxic mineral such as asbestos. We can also help you get in touch with your former shipmates. Contact us at 760.621.6147 for more information.