The USS Camp (DE-251) was an Edsall-class destroyer escort ship. The main requirements demanded of vessels of this type were related to safely escorting other ships from one operation area to another.

The USS Camp was involved in missions that took place at the time of World War II but it also reported for duty during the Vietnam War. For its actions at the conflict zones, the vessel received several honors, among which stand the World War II Victory Medal as well as the Republic of Vietnam Campaign Medal. 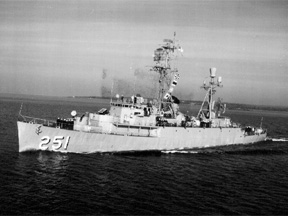 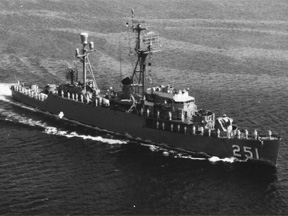 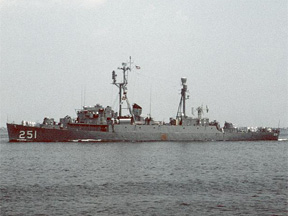 The USS Camp was built by Brown Shipbuilding Company in Houston, Texas. The vessel had Mrs. O. H. Camp as a sponsor and Lieutenant Commander P. B. Mavor commanding on its commissioning day on 16 September 1943.

In January 1944, the Camp regularly left Norfolk to provide escort services to ships traveling in a convoy mostly to the United Kingdom. The ships were mainly transporting armed forces and artillery but also other supplies.

The Camp had to sail during unfavorable weather conditions, as they often were in the North Atlantic waters resulting in tours that were mostly without incidents. The exception was the time when the ship collided with a tanker somewhere in the proximity of Ireland in November 1944, crash that led to the death of one sailor from the Camp's crew.

In the summer of 1945, the Camp was ordered to Eniwetok to engage in conquest operations. The ship was also tasked with air-sea rescue missions that took place near Kwajalein in November.

The Camp was placed out of active duty in May 1946, but it was re-commissioned in July 1955 under the DER-251 classification. Additionally, the vessel was to report to Newport, Rhode Island conducting operations in the area through the year of 1962. In the following years until 1965, the ship did duty near Cuba having been assigned the missions of maintaining surveillance on the Russian ships sailing around the area and of coming to the rescue of people that were fleeing Cuba.

In 1965, the Camp was ordered to do patrol duty in the region around Vietnam. Two years later, in August, the ship was involved in operations overseeing the actions of the Viet Cong against the Republic of Vietnam, specifically in regard to their naval forces.

In September 1967, the Camp was engaged in even more patrol activities frequenting the Formosa Straits area. When Typhoon Carla hit, despite the best efforts of the ship to avoid getting in its path, it still was heavily damaged and barely made it to Sasebo, Japan in order to be dry-docked for reparations to be performed.

After the repairs were completed, the vessel was ordered to return to Vietnam where it had to resume escort operations. By the year of 1968, the Camp had installed on board one of the most advanced communications system available at the time.

In February 1971, the Camp entered the South Vietnam naval forces through a transfer under a new name and a new classification, Tran Hung Dao (HQ-01). In July of 1980, the ship was redesignated once more, sailing as BRP Rajah Lakandula (PF-4) with no public records mentioning its fate afterward.

From the 1930s until the late 1970s, every ship in the United States Navy contained asbestos since it was an order from Navy officials to have the mineral incorporated in as many parts of the ship as possible. The initiative came from a place of concern for the safety of those that would be serving at sea since asbestos was a well-known insulator and it was also to be found in the majority of the U.S. mines.

In order to face the demands of World War II, the Korean War, and the Vietnam War, the Navy was glad to find a material that would mix in so well with other compounds improving their strength and durability for very affordable prices. Making the most out of the material's inertness to high temperature, asbestos was used to cover electrical wirings on board as well as steam pipes, engines, and boilers.

Whenever asbestos-containing materials would deteriorate, toxic asbestos dust would be released and the servicemen that had to do maintenance work, for example, and had to regularly come into contact with these pieces of equipment were breathing in asbestos particles having no idea of the kind of danger they were in since a confirmation of the toxicity of the mineral only came with the Clean Air Act of 1970.

Have You Been Exposed to Asbestos on the USS Camp (DE-251)?

We can help you learn more about how asbestos was used in Navy ships and about how veterans serving on the USS Camp ended up being exposed to the toxic substance. For more information, call us at 760.621.6147.