The USS Carl Vinson is a Nimitz-class supercarrier. The name of the ship honors Carl Vinson, a Congressman from Georgia that consistently devoted his efforts to the U.S. Navy and the U.S. Marine Corps.

The Carl Vinson has been involved in a number of quite high profile operations for which it received many prestigious awards. In 2011, it was from the deck of the Carl Vinson that the body of Osama bin Laden was buried at sea. 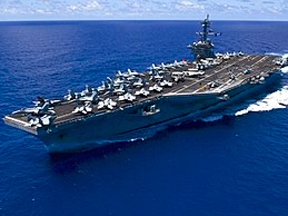 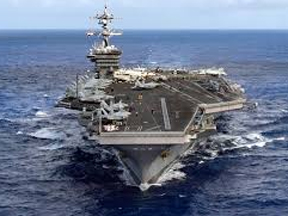 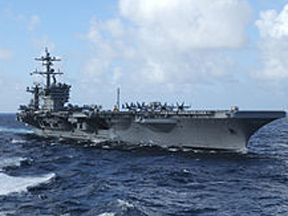 The Carl Vinson was built by Newport News Shipbuilding. It was commissioned on 13 March 1982, having Molly Snead as its sponsor and Captain Richard Martin in command. To complete shakedown, the vessel had to undergo multiple exercises off the East Coast which it successfully did. Afterward, the Carl Vinson departed for duty for the first time in March 1983. It was a tour around the world that lasted eight months with operations in the Atlantic Ocean, Indian Ocean and the Pacific Ocean, but also in the Mediterranean, the Arabian Sea and the South China Sea.

In October 1983, the Carl Vinson was assigned a new homeport, Naval Station Alameda, California. On 14 October 1984, the Carl Vinson left for the Western Pacific and ended up in the Sea of Japan in pursuit of a Soviet submarine. As a way to acknowledge the efforts of the ship from November 1984 to May 1985, the Carl Vinson was awarded its first Meritorious Unit Commendation, specifically for the missions from that time span. In 1984, the ship also had received the Admiral James H. Flatley Memorial Award for the joined effort with aircraft operations. In August 1986, the ship became the first U.S. aircraft carrier of the modern kind to serve in the Bering Sea. In June 1988, Carl Vinson left for another deployment during which it showed support to Operation Earnest Will, which was the American effort to protect Kuwaiti tankers from Iranian assaults.

In September 1989, the Carl Vinson took part in PACEX '89, which is considered the largest training exercise to occur during peacetime since World War II. In September 1990, the Carl Vinson was stationed at Bremerton Naval Station in Washington to undergo a 28-month overhaul. In February 1994, the vessel steamed to the Persian Gulf to support Operation Southern Watch, which meant that the ship was to monitor south-central Iraqi airspace until the invasion of Iraq in 2003. In 1995, from 26 August to 3 September, the ship was a part of the ceremonies commemorating the end of World War II. At the time the festivities were happening, the vessel was visited by President Bill Clinton himself.

In 1996, the Carl Vinson steamed to the Persian Gulf to continue to support Operation Southern Watch and to engage in Operation Desert Strike as well, both having the purpose of gaining more control over Iraq. Because of Naval Air Station Alameda closing down, the Carl Vinson was assigned a new homeport in Bremerton, Washington in January 1997. The Carl Vinson steamed to the Persian Gulf once again in order to participate in Operation Desert Fox, which was a bombing campaign from 16 to 19 December 1998 targeting Iraq. The ship also continued to contribute to Operation Southern Watch, launching strikes ceaselessly into March 1999.

For 13 months, the Carl Vinson was dry-docked at the Puget Sound Naval Shipyard. The ship received upgrades that cost over $230 million. In July 2001, the Carl Vinson departed Bremerton, Washington and was headed toward the Persian Gulf to participate in Operation Southern Watch, when the terror attacks from 11 September 2011 occurred and the ship changed its directions.

The Carl Vinson was ordered to the North Arabian Sea and on 7 October 2001, the ship started its service for Operation Enduring Freedom, the declared global war on terrorism. After having launched more than 4, 000 sorties in a span of 72 days as part of Operation Enduring Freedom, the vessel was awarded the Global War on Terrorism Expeditionary Medal. For this same deployment, the ship also received the Battle Efficiency Ribbon and the Navy Unit Commendation. In April 2002, the Carl Vinson completed overhaul, which added upgraded operational systems but also provided thoroughly renovated living areas for the crew as to improve both the working and living conditions for those on board.

In 2003, due to Operation Iraqi Freedom which had the purpose of overthrowing the government led by Saddam Hussein, the Carl Vinson was ordered at sea indefinitely. The Carl Vinson sailed to multiple locations from January to September 2003, such as Australia, Guam, Hawaii, South Korea, Japan and Singapore. In 2004, the Carl Vinson was awarded the Marjorie Sterrett Battleship Fund Award for being the most battle-ready vessel during that year among the U.S. fleet. In January 2005, the vessel left on another Persian Gulf deployment to offer help to the ongoing Operation Iraqi Freedom and Operation Enduring Freedom. In November 2005, the ship underwent refueling and overhaul, a complex process in which nuclear-powered vessels have their fuel replaced while also benefiting from general maintenance work. The ship began shakedown exercises on the sea on 28 June 2009 and by 1 July 2009, it arrived at Naval Station Norfolk.

In January 2010, after the earthquake in Haiti, the Carl Vinson was redirected to Haiti to assist those affected, thus, bringing its own contribution to Operation Unified Response. Carl Vinson provided medical care and water that was safe to drink with the help of the desalination equipment that was part of the ship's apparatus. In May 2011, as the Carl Vinson was sailing the Northern Arabian Sea waters, the ship took on board the body of Osama bin Laden for it to be buried at sea since no country was willing to take responsibility for his remains. In July 2012, the Carl Vinson entered a Planned Incremental Availability (PIA) period during which the ship had its defense systems and electronics renewed. In August 2014, the vessel was assigned missions with the U.S. 5th and 7th fleet. The Carl Vinson replaced USS George H. W. Bush in the fight against the Islamic State from Iraq. The ship engaged more than 230 tons of artillery against ISIS. In April 2017, the ship was commanded to the waters around North Korea to do surveillance work on its ballistic missile program while it was also training with the Republic of Korea Navy.

In January 2018, the Carl Vinson made what is considered to be a historic visit to Vietnam during which the Navy crew participated in training exercises and cultural events alongside the Vietnamese Navy as a way for the countries to strengthen their military and cultural bonds. In August 2018, the Navy announced that the Carl Vinson will be entering an interval of maintenance at Puget Sound Naval Shipyard.

Aircraft carriers, such as the USS Carl Vinson are built with the purpose of being able to sustain combat at sea should the circumstances call for it and so it is critical for their electrical systems to be perfectly insulated. Throughout the 20th century, the Navy used asbestos in shipbuilding and ship maintenance. For a long time, the fibrous mineral was a highly desired material because of its resistance to fire and intense heat.

However, it was soon brought to light the fact that asbestos was the possible cause of serious respiratory conditions with many cases of veterans nowadays pinpointing the exposure to the mineral as the definite cause of a rare disease called mesothelioma.

The exposure could have happened in a number of ways that would involve disturbing the asbestos and causing it to become airborne and easy to inhale. Thus, any simple reparations could have made the air toxic especially in the areas below the deck in which ventilation was poor.

Have You Been Exposed to Asbestos on the USS Carl Vinson (CVN-70)?

We can guide you in understanding your exposure to asbestos. We can also help put you in contact with your former shipmates. Call us at 760.621.6147 for more information.