The USS Charles J. Badger (DD-657) was a Fletcher-class destroyer. The ship was named in honor of Rear Admiral Charles J. Badger who distinguished himself during his service at the time of the Spanish-American War and also during World War I.

The Charles J. Badger mainly conducted operations during World War II, and for its duty there the vessel was awarded five battle stars.

By design, the ship had the abilities to accompany much larger vessels that would travel in a convoy. If confronted with small-range attackers, the Charles J. Badger was also equipped with the weaponry and artillery that would allow it to withstand the attack. 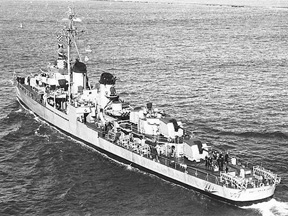 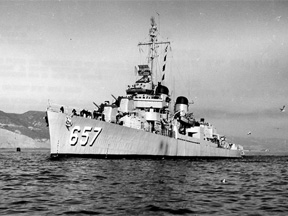 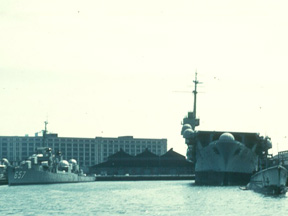 The USS Charles J. Badger was built by the Bethlehem Steel Company in Staten Island, New York. It had Miss I. E. Badger as a sponsor and Commander W. G. Cooper assigned as a commanding officer when the ship was placed in commission in July 1943.

In November, the ship arrived at San Francisco in California for operations in the Pacific, and by December 1973, it reported at Adak, Alaska for patrol and escort duty, sailing around the Aleutian islands and constantly being at odds with the bad weather conditions that included storms and consistent fog until the end of its missions in the area in August 1944.

While steaming the waters of the Philippines, the Charles J. Badger screened vessels that were in charge of transportation in preparation of the attack landings at Dulag, Leyte in October 1944, opening fire only to drive away air attacks from the Japanese forces that were trying to disrupt the unloading operations.

On 8 January 1945, the ship arrived at Lingayen Gulf where it was assaulted by Japanese kamikazes. The following day, the ship saw the beginning of unloading operations under its watch and under the protection of its anti-aircraft guns. Eventually, the vessel sailed to Leyte in order to be a part of the rehearsal landings on the Kerama Retto, which was a key factor in the attacks on Okinawa.

In March 1945, the Charles J. Badger was stationed off Retto with the mission of guarding the landings of American forces there, taking the Japanese by surprise. On 9 April, as the ship was doing duty at its fire support station, a Japanese boat launched a depth charge at the vessel and then sped off. The explosion that occurred flooded the ship and totally damaged its engines. Although the flooding was stopped, the ship had to enter an overhaul, as the damage surpassed the resources on board, and so it was escorted to Bremerton, Washington.

After the overhaul at Bremerton was completed, the ship was placed in reserve for some time but it was eventually recommissioned and on its first Atlantic deployment in June 1953. The ship ended up engaged in a world tour with various missions along the way. For instance, for about two months the vessel had to perform patrol duty off Korea and also in the Taiwan Straits. Early in 1956, and then later the same year and well into 1957, the Charles J. Badger was engaged in two successful deployments in the Mediterranean with the 6th Fleet. In December 1957, the ship was placed out of commission at Boston, Massachusetts. It was sold in May 1974 to Chile where it was scrapped.

All the ships built by the Navy in the period between the early 1930s and the mid-1970s contained a mineral called asbestos that was in high demand at the time in all industries that involved construction since the material was a great fire retardant, it did not react in any way with electricity and it also displayed flexibility and durability.

Asbestos was cheap, as it was mined in abundance all over the United States, which only further encouraged the purchase of enormous quantities of it, with the U.S. Navy having been among one of the top consumers. As a result, asbestos was to be found in the majority of the matters related to ships beginning with the shipyards in which the vessels were put together and repaired to the walls and flooring on the vessels, to the insulation and equipment brought on board.

The toxicity of asbestos is a confirmed medical fact nowadays, but for decades people were unaware of it while they interacted with the mineral. If left undisturbed in its compound, the substance does not pose any threat to the health of those in its presence. However, it was an impossible scenario for asbestos to be in a perfect state while on a ship due to the continuous cycle of deterioration and maintenance that would occur. Cutting, drilling and scrapping would often be a part of the repair jobs performed regularly on the ship resulting in the release of asbestos dust and putting those inhaling it at great risk of developing incurable diseases decades after the exposure happened.

Have You Been Exposed to Asbestos on the USS Charles J. Badger (DD-657)?

If you are the victim of an asbestos-related disease and you have done service on the USS Charles J. Badger, we can provide you with extensive information about the link between asbestos usage in the U.S. Navy and veteran illnesses. To learn more, call us at 760.621.6147.