The USS Chester T. O'Brien was a John C. Butler-class destroyer escort that was acquired by the US Navy during World War II.

This ship was named after Platoon Sergeant Chester Thomas O'Brien, known for his heroic service at Guadalcanal and was sponsored by his sister, Mrs. J. Edington.

The ship carried 215 people on board and had major missions in Manus, Palau, Norfolk, San Diego, San Pedro, and Newport. 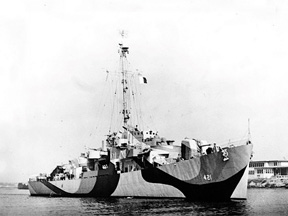 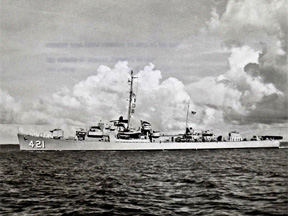 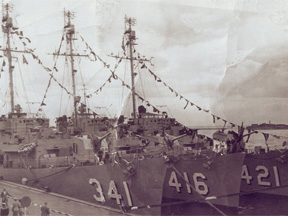 The USS Chester T. O'Brien (DE-421) was laid down on January 21, 1944, by the Brown Shipbuilding Co; Houston, Texas. The ship was launched on February 29, 1944, and later commissioned under the command of Lt. Cmdr. R.D. White on July 3, 1944. The ship initially reported to the Atlantic fleet and served for 2 years in the US Navy before it was decommissioned at San Diego on July 2, 1946.

Later, on March 28, 1951, the ship was recommissioned at San Diego and homeport assignment was changed to Newport on June 22, 1951. Between the years 1954 and 1958, the USS Chester T. O'Brien served as a school ship with the Escort Vessel Gunnery School of Destroyer Force, Atlantic, and the Fleet Sonar School, and performed local operations at the Key West and Newport. The ship was assigned to 3rd Naval District at New York City from September 05, 1958. After the final decommissioning on February 21, 1959, the ship was struck from the Navy List on July 1, 1972, and sold for scrapping on April 04, 1974. The ship served a total of 11 years and 2 months.

The USS Chester T. O'Brien (DE-421) was a destroyer escort mainly designed for anti-submarine and anti-aircraft battle during World War II. This ship was built during the time when the use of asbestos in shipbuilding was rampant, and as a result, most of the equipment on this ship contained asbestos. Boilers, pumps, pipes, valves, turbines, electrical fixtures, hull construction, and other propulsion equipment often had asbestos insulation thereby exposing several sailors serving on the USS Chester T. O'Brien (DE-421) and people involved in the building, renovation, repair, and demolition of the ship. Asbestos was also used as a fire retardant in most places within the ship, for instance, the non-skid flooring on the decks and on bulkhead walls. Consequently, Navy veterans, as well as personnel such as boiler tenders, machinist mates, electrician's mates, pipefitters, shipbuilders, and shipyard workers, are at an increased risk of developing asbestos-related diseases including malignant mesothelioma, lung cancer, and asbestosis.

Have You Been Exposed to Asbestos on the USS Chester T. O'Brien (DE-421)?

We assist veterans who served in the US Navy aboard the USS Chester T. O'Brien (DE-421). We also help them get contacts from their former shipmates. For further information, get in touch with us at 760.621.6147.