The USS Chilton (APA-38) was a Bayfield-class attack transport. The main duties of the ship were to safely and timely transport troops in and out of combat zones.

The most notable deployments of the USS Chilton were during World War II when it was primarily engaged in operations against the Empire of Japan.

For its efforts during the war, the vessel was awarded a battle star. 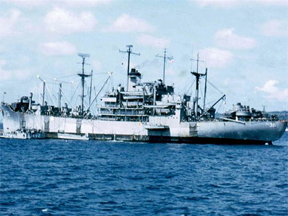 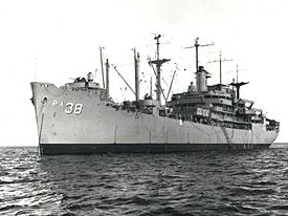 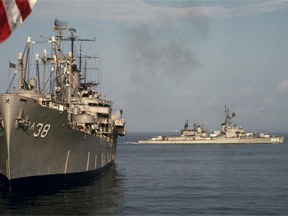 History of the USS Chilton (APA-38)

The USS Chilton was built by the Western Pipe and Steel Company, San Francisco, California and it was initially planned for it to be constructed as an SS Needle. The vessel was sponsored by Mrs. Henry A. Reilly and it was commissioned on 7 December 1943 having Commander A. C. Geisenhoff in command. From January to October 1944, the Chilton played the role of a training ship for other attack transports that were being tested at sea before beginning their commissioning processes.

The Chilton was involved in Operation Magic Carpet, participating in two tours, one to the Philippines and another to Okinawa, only returning to San Francisco on 10 May 1946. On 2 June 1946, the Chilton left San Francisco to take part in the testing of the atomic bomb occurring at Bikini Atoll. Afterward, the vessel was headed to China and Japan for duty. In November 1948, the Chilton departed San Francisco to bring back Marines from China. This mission was completed on 31 May 1949. On 10 December 1949, the ship docked at Norfolk, Virginia which became its new homeport. In June 1951, the Chilton departed on its first deployment in the Mediterranean.

Asbestos, a mineral that is extremely dangerous if airborne because once it is inhaled, the lungs have no way of eliminating it, was actively used by the U.S. military due to the abundance of the material and its heat-resistance. Its fireproofing qualities made asbestos especially popular in the Navy since vessels and submarines generally have large sections of their operating systems producing intense and constant high temperatures.

Considerable amounts of asbestos were used in below-deck spaces, but asbestos-embedded materials also found their way into pipes, electrical wiring and even the sleeping quarters, meaning that regardless of their job being above or below deck, people that served in the Navy are at high risk of having been exposed to the toxic fiber.

Identifying an asbestos-related disease on one's own is quite the impossible mission since such illnesses not only take decades to manifest, the latency period lasting anywhere from 10 to 50 years but symptoms are often misinterpreted leading to a diagnosis coming generally too late.

Have You Been Exposed to Asbestos on the USS Chilton (APA-38)?

We can help you learn more about asbestos and the Navy. If you want to legally seek compensation, we can put you in contact with qualified asbestos lawyers. Call us at 760.621.6147 for more information.