The USS Claud Jones (DE-1033), a Claud Jones-class destroyer escort built during the late 1950s was a diesel-powered version of the Dealey-class. This design was made in order to produce a cheaper ship that facilitates rapid production of ships during wartime. As it was considered ineffective in anti-submarine warfare by the U.S. Navy, the ship was sold to the Indonesian Navy within 15 years.

The USS Claud Jones (DE-1033) was the first in its class and was launched on May 27, 1958, by Avondale Marine Ways, Avondale, Louisiana. The ship was named after Claud Ashton Jones, Rear Admiral and sponsored by Mrs. M.R.J. Wyllie, daughter of Rear Admiral Jones. The USS Claud Jones (DE-1033) has been honored with two Meritorious Unit Commendations - one for its operations in the Indian Ocean Deployment and the other for operations with CTF 92 in 1970. 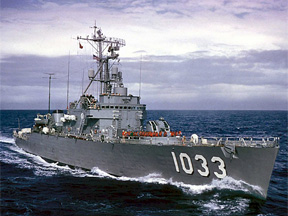 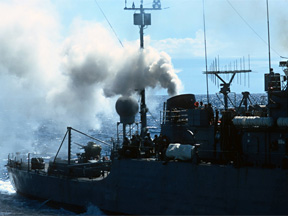 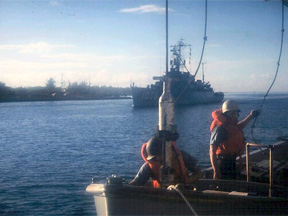 The USS Claud Jones (DE-1033) was commissioned on February 10, 1959, under the command of Lt. Comdr. W.M. Cone. After completing the training at the Guantanamo Bay, Cuba, the ship moved towards Northern Europe between June and August 1959 and then returned to the home port - Key West, Florida. The ship sailed along the east coast and the Caribbean during the next year and also completed a voyage to Northern Europe through September and October for NATO exercises.

The ship participated in the Cuban Missile Crisis between October 24 and November 30, 1962. During this period, the USS Claud Jones received the Navy Expeditionary Medal and Armed Forces Expeditionary Medal. In May 1966, the homeport was changed to Pearl Harbor, Hawaii after which the ship sailed throughout the Pacific and had a deployment in the Indian Ocean. During the years 1971 and 1972, the USS Claud Jones sailed towards the Gulf of Tonkin to support the US military operations at Vietnam. The ship has served the US Navy in every major area of the world and completed 15 years of service until it was decommissioned on December 16, 1974. The ship was then transferred to the Indonesian Navy, renamed as KRI Monginsidi, where it served till January 2003.

The USS Claud Jones (DE-1033) was a destroyer escort that was built to defend unarmed merchant marine vessels during World War II. As the ship was constructed during the time when asbestos was extensively used for insulation in shipbuilding, the carcinogen was found in most of the equipments onboard, for instance, boilers, pumps, pipes, valves, and turbines. Therefore, veterans aboard this ship were frequently exposed to asbestos dust that inadvertently got released into the air during maintenance works.

The asbestos fibers can be easily inhaled and remain in the inner lining of the lungs, heart, and abdomen leading to the development of mesothelioma. Generally, destroyer escorts carried at least 200 crew members and as a result, thousands of people were at risk of getting exposed to asbestos on the job, especially those people who worked inside confined high-heat areas such as boiler rooms and engine rooms.

Have You Been Exposed to Asbestos on the USS Claud Jones (DE-1033)?

If you have served in the US Navy aboard the USS Claud Jones (DE-1033), and have developed an asbestos-related illness, we can help you learn more about the types of compensation you are eligible for. We also help you get in contact with your former shipmates. For further information, get in touch with us at 760.621.6147.