The main tasks the ship was in charge of were launching missiles.

The most notable interventions of the USS Claude V. Ricketts occurred as the vessel conducted operations during the Iran hostage crisis and at the time of the bombings in Lebanon. 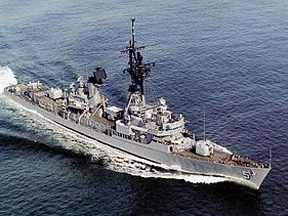 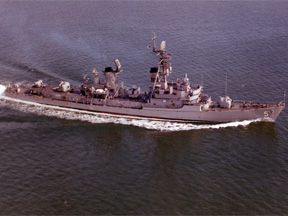 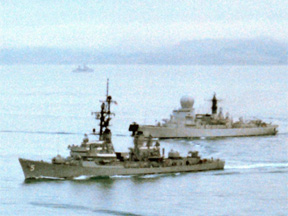 The USS Claude V. Ricketts was built by the New York Shipbuilding Corporation at Camden, New Jersey. The ship was placed in commission on 5 May 1962 under the nomination of USS Biddle. However, the name of the ship was changed in July 1964 to honor Admiral Claude V. Ricketts. Between June 1964 and almost until the end of 1965, the vessel was to participate in a manning experiment for a Multilateral Force (MLF). Besides personnel from the U.S., the experiment was meant to include sailors from Greece, Italy, United Kingdom, Netherlands, Turkey and West Germany. Even though the MLF never reached completion, the Secretary of the Navy, Paul Nitze, determined that the project on the Claude V. Ricketts was a success and awarded the ship with a Navy Unit Commendation for its 18-month efforts devoted to it. After the manning project, the Claude V. Ricketts was deployed to the Mediterranean Sea starting with 1966 up until 1973. At the end of the tour, the ship docked at Norfolk Naval Shipyard to undergo repairs for 10 months.

By July 1975, the vessel was sailing to the Mediterranean again. The Claude V. Ricketts assisted the USS Belknap (CG-26) when the latter accidentally collided with the USS John F. Kennedy (CV-67) in November 1975. The Claude V. Ricketts helped with damage control and with tending the injured, receiving a Navy Unit Commendation for its actions. In October 1976, the ship left for the Mediterranean Sea once more and then it was ordered to complete a six-week mission alongside the Brazilian Navy. For its service between October 1976 and September 1977, the ship was awarded a Navy Expeditionary Medal.

Beginning with September 1977 until October 1978, the Claude V. Ricketts entered the Philadelphia Naval Shipyard for repairs. After refresher exercises, the ship joined the US Middle East Force with the 6th Fleet. For its service between November 1979 and February 1980, the Claude V. Ricketts received another Navy Expeditionary Medal. In January 1981, the ship sailed to Northern European waters to cooperate with the Standing Naval Force Atlantic and it had the chance to make port visits in eight countries and 15 cities. For this deployment, the vessel received a Meritorious Unit Commendation. From 1983 to 1984, the Claude V. Ricketts was commanded to Lebanon after the bombings in Beirut and it received the Armed Forces Expeditionary Medal for its three deployments in the area.

On 31 October 1989, the Claude V. Ricketts was placed out of commission at Norfolk Naval Station, Norfolk, Virginia. The ship was sold for scrapping in December 2001.

Asbestos is a toxic fibrous mineral that was heavily used in shipyards and shipbuilding for most of the 20th century. The dangers of using the substance were speculated for a long time before usage was regulated. For the U.S. Navy, for instance, the properties of asbestos were extremely valuable, especially in times of war when resources were to be treated with prudence. Having been cheap, widely available, but most importantly fire-resistant and with a low electrical conductivity made it fit the requirements of many branches of the military, but it especially resonated with the demands of the Navy. Equipment containing asbestos was also non-corrosive and it acted as a stabilizer for many other mixtures which made it an ideal option for salty sea conditions.

At the same time, however, the mineral has been proven to be harmful to the health of humans, especially when found in its fiber form because it is more easy for it to be inhaled. The human body does not possess the mechanism of eliminating such type of fiber, which means that there will be no resistance in the face of the fiber irritating the organism. After enough time passes, a few decades as medical records show, symptoms start appearing only to reveal a cancerous disease at an already advanced stage. If you know somebody that served in the Navy and is affected by an asbestos-related illness, they might be able to legally recover damages.

Have You Been Exposed to Asbestos on the USS Claude V. Ricketts (DDG-5)?

We can help you sort out your unique experience with asbestos. If you decide to file a claim, we can put you in touch with skilled asbestos lawyers. Call us at 760.621.6147 for more information.