The USS Cofer (DE-208/APD-62) was a Buckley-class destroyer escort. By design, the ships of this class were made in order to escort other vessels.

The name of the ship honors John Joseph Cofer who died in the Naval Battle of Guadalcanal.

The USS Cofer (DE-208/APD-62) distinguished itself during World War II for which it was awarded eight battle stars. 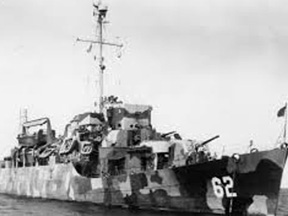 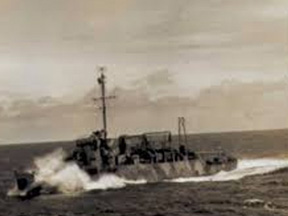 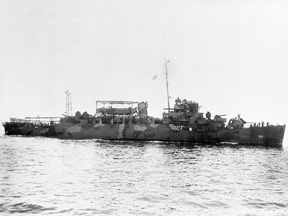 The USS Cofer was built by Charleston Navy Yard. It was commissioned on 19 January 1944 with Mrs. M. J. Cofer as a sponsor and with Lieutenant Commander Alvin P. Chester commanding. Between March and June 1944, the Cofer was in charge of escorting convoys on two different occasions, both involving transatlantic sailing. The ship then headed to New York to be converted to a Charles Lawrence-class high-speed transport.

The Cofer left New York in September 1944 and by November 1944 it had joined the 7th Fleet for operations in Hollandia, New Guinea. The vessel transported troopship to be landed on Leyte, enduring constant Japanese air attacks as it was sailing to the location. Immediately after landing forces at Leyte, the Cofer departed to Palau where it embarked even more troopship to carry to Ormoc Bay. This route, too, was a dangerous one as suicide planes often attacked the ship. As a consequence, the Cofer had to open fire alongside the rest of the fleet. The vessel also provided for the Liddle (APD-60) when the ship was crashed into by a kamikaze. Still engaged in its Philippines mission, the Cofer landed more reinforcements in January 1945 at Lingayen Gulf, at Luzon and Palawan in February 1945 and at Zamboanga and Cebu in March 1945.

In May 1945, the fleet was preparing to conduct motor torpedo operations off the coast of Cape Djoeata when hidden shore batteries sank YMS-481. It was the Cofer that ended up destroying the batteries and then rescuing 18 survivors of the sunken YMS-481. In the following month, in June, the ship saved 23 survivors of a YMS-50. In September 1945, the Cofer was sailing the waters off Okinawa. It made a brief tour to Nagasaki to embark released prisoners of war, after which it went back to operating with the 7th Fleet to strengthen the occupation of Okinawa and Fusan. In June 1946, the Cofer was placed out of commission and it entered the reserve fleet at Green Cove Springs in Florida.

Because of the fact that asbestos was mined all across North America, the U.S. Navy was sold large amounts of the mineral due to the various ways it was being used in building ships and equipment suitable for sea conditions. Asbestos is flexible and has a high resistance to fire which meant that it was safe to utilize in the construction of mechanical systems, but also in insulation and also as a pipe and valve sealant. Unaware at that time, the Navy personnel was exposed to the toxicity of asbestos particles, which they would inhale regularly pretty much anywhere on board where there would be repair work or renovation.

Exposure would occur just as much in shipyards when the ships were built or undergoing maintenance routines. Officers, sailors, workers from the shipyards but also personnel in charge of the transportation of the asbestos-embedded materials were constantly breathing in asbestos fibers that would loosen and become airborne due to being moved around and disturbed all the time.

To make matters worse, the majority of the people in charge of working with equipment containing asbestos had to do their jobs in narrow rooms where concentrations of the toxic mineral would be high due to the lack of proper ventilation. Given the fact that the workers were not aware that they were doing work in a hazardous environment, they had no protective gear in that sense.

Have You Been Exposed to Asbestos on the USS Cofer (DE-208)?

We can help you better understand how asbestos exposure happened in the U.S. Navy. We can also help you find your former shipmates. Call us at 760.621.6147 for more information.