The USS Columbus (CG-12), a Baltimore-class cruiser was initially commissioned on June 8, 1945, as a heavy gun cruiser (CA-74) and was then reclassified as CG-12 on September 30, 1959. After 14 years of service, the heavy cruiser, the USS Columbus (CA-74) that weighed 13,600 tons underwent a massive transformation to a guided missile cruiser (CG-12) between the years 1959 and 1962. This conversion that included removal of guns, upper deck, and interior structures and installation of a very tall superstructure to carry several radar antennas and electronic devices was carried out at the Puget Sound Naval Shipyard located at Bremerton, Washington. The conversion helped improve the ship's capabilities and appearance. The ship was then recommissioned on December 1, 1962. 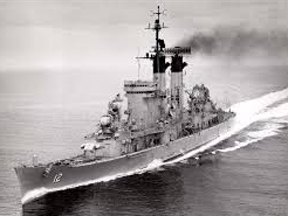 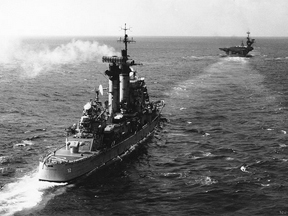 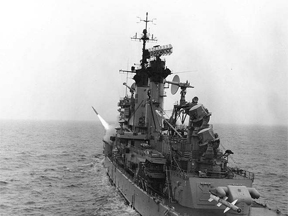 History of the USS Columbus (CG-12)

The USS Columbus (CG-12), after being commissioned on December 1, 1962, went on sea trials off the California coast between March and June of 1963 and then came back to the Puget Sound Naval Shipyard in the month of November to get equipped with the SPS-30 Radar Systems and two 5-inch guns. From December 1963 to March 1964, the ship operated off the west coast of the United States and then entered the Long Beach Naval Shipyard in April for a short period of time.

On August 5, 1964, the ship sailed towards the Western Pacific for the first deployment after the guided-missile conversion and returned to the United States on February 6, 1965. After spending the remaining days of the year off the west coast, the ship was reassigned to the Atlantic Fleet in January 1966, and performed duties as flagship for COMCRUDESFLOT 8 in February and also operated along the east coast. Until April 1967, the ship operated with the Sixth Fleet and was again deployed to the Mediterranean from January to July of 1968. The ship was at the Boston Naval Shipyard for overhaul from July to October 1968. Over the years, the ship was deployed to the Mediterranean seven times. The USS Columbus (CG-12) served the nation for 12 years and 1 month until decommissioning on January 31, 1975. The ship was struck off from the Naval Vessel Register in August 1976 and was sold for scrapping in August 1977.

"I'm a Vietnam era veteran. I was on the Columbus, 1974 and '75. I was a radioman and I worked in the transmitter room. I remember back then, we would have to dust every day, it was like dandruff, this stuff falling down from the pipes. We knew is asbestos, but we didn't know it was bad for us; but I remember we would have to clean all of our equipment daily because of a white powder dust", said a Navy veteran who served on the USS Columbus (CG-12).

The USS Columbus (CG-12) was one of the 140 cruisers that contained asbestos and were used actively for combat. Though cruisers played a major role in wartime operations, their construction with asbestos-containing materials, especially pipes and insulating materials posed a serious health threat to the people on board. As the cruisers could perform various tasks in battle, these were highly utilized during wartime. An average cruiser carried as much as 350 passengers at a time, and as a result, thousands of crew members were exposed to asbestos. Currently, these veterans and workers at shipyards are at risk of developing deadly mesothelioma.

Have You Been Exposed to Asbestos on the USS Columbus (CG-12)?

The veterans who have served the US Navy aboard the USS Columbus (CG-12), and have developed an asbestos-related illness can claim their rightful compensation. We can assist them to file a claim and also help to get in contact with former shipmates. For further information, get in touch with us at 760.621.6147.