The USS Coral Sea (CV-43), also known under the CV, CVB, and CVA designations was a Midway-class aircraft carrier.

Because of its long period of service, the The USS Coral Sea (CV-43) was nicknamed Ageless Warrior.

The USS Coral Sea acted as a proxy airbase providing aircraft a full-length flight deck and artillery at hand. 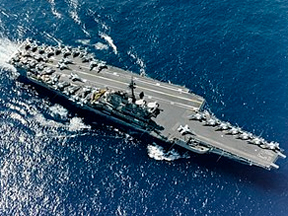 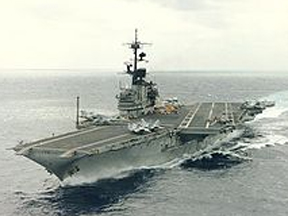 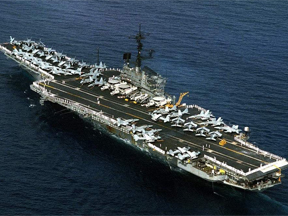 The USS Coral Sea was built by Newport News Shipbuilding from Newport News, Virginia. The ship was commissioned on 1 October 1947 with Captain A.P. Storrs III commanding and having Mrs. Thomas C. Kinkaid as a sponsor. On 3 May 1949, the ship steamed to the Mediterranean for the first time, joining the 6th Fleet. On 21 April 1950, Captain John T. Hayward flew an AJ-1 Savage attack bomber from the deck of the Coral Sea, the first in a series of atomic bomber carrier operations. On 9 September 1950, the Coral Sea went back to the Mediterranean to support the 6th Fleet and exercises alongside Air Group 17. In 1951, the vessel participated in Exercise Beehive I conducted by NATO. By 1953, the Coral Sea was sailing yet again in the Mediterranean, reporting to the 6th Fleet. The ship was also assigned tasks of training pilots which took place in Virginia Capes and Mayport, Florida.

In April 1953, the Coral Sea departed for another deployment in the Mediterranean. A highlight of the tour was the ship's participation in Exercise Black Wave set up by NATO while Deputy Secretary of Defense R. M. Kyes was watching from the deck. While sailing in the Mediterranean, the Coral Sea helped American citizens during the Suez Crisis in late 1956 by transporting them away from the area. On 24 May 1957, the Coral Sea was decommissioned at Puget Sound Naval Shipyard in order for it to undergo drastic changes, such as the inclusion of an angled deck, an enclosed hurricane bow and the improvement of other operating systems. The Coral Sea underwent commissioning a second time on 25 January 1960. In September, the Coral Sea was on its first deployment in the Far East, side by side with the 7th Fleet. On 7 December 1964, the Coral Sea and the 7th Fleet reported for duty after the Gulf of Tonkin incident. On 26 March 1965, together with the 7th Fleet, the Coral Sea was engaged in Operation Rolling Thunder, which was essentially a bombing of North Vietnam's military targets.

The year 1971 saw a general dissatisfaction in regard to the Vietnam War leading to a group of more than 1000 people from the crew to form "Stop our ship", an organization they put together on their own when they started petitioning against supporting the war. Though it was a phenomenon that occurred on the Coral Sea, the concern for the American contribution to the war was a feeling shared by the U.S. Navy and military in general at the time. The Coral Sea continued to be deployed to Vietnam, with operations gaining momentum starting with April 1972, when North Vietnam launched an intense offensive. As a response, the ship's aircraft began Operation Freedom Porch concerned primarily with the bombing of Haiphong petroleum storage spaces. Another notable action is Operation Pocket Money, in which the U.S. Navy mined the main ports in North Vietnam in May 1972, which led to compromising the Vietnamese war supplies intake. On 27 January 1973, the hostilities in Vietnam ended as a result of the Paris Peace Accords having been signed. By April, almost 600 American prisoners were freed. In May 1975, the Coral Sea, alongside the U.S. Air Force and the U.S. Marine Corps units was involved in the Mayaguez incident. Their mission was to recover the SS Mayaguez ship and crew held hostage by the communist Khmer Rouge. During the rescue, 18 lives were lost on the side of the saving party, with the Coral Sea being awarded the Meritorious Unit Commendation for its efforts.

In November 1979, the United States Embassy in Tehran was taken over by followers of Ayatollah Khomeini. 63 Americans have been kept hostage which set off the Iran hostage crisis. The Coral Sea was part of the failed rescue attempt from April 1980. The hostages were only released the following year, 1981 after the negotiation and the signing of the Algiers Accords. On 20 August 1981, the Coral Sea steamed to the Western Pacific for the last time, reporting at Pearl Harbor, the Philippines and sailing the South China Sea. On 23 March 1982, the vessel docked at Alameda, its homeport, for upkeep and then training exercises. In March 1983, the Coral Sea went on a six-month deployment around the world. In April 1985, the ship had a collision with an Ecuadorian ship and entered Norfolk Naval Shipyard in Portsmouth, Virginia for repairs that lasted two months. In October 1985, the Coral Sea re-joined the 6th Fleet in the Mediterranean. While conducting operations in the Gulf of Sidra, the 6th Fleet was under missile attack by Libyan Armed Forces in March 1986, after the latter claimed ownership over international waters. Coral Sea took part in Operation El Dorado Canyon, which was a retaliation mission against Libya.

Throughout the 1980s, the ship was on deployments in the Mediterranean and in the Indian Ocean. The USS Coral Sea began its decommissioning on 26 April 1990. The ship was sold to be scrapped in 1993, but the process was slowed down by legal, financial and environmental issues. By September 2000, the scrapping was completed.

Just like the rest of the ships that were built in the period of World War II, the USS Coral Sea made use of large amounts of asbestos in its construction. The harmful mineral was heavily exploited by the government because of the low price for which it could be acquired and for its physical properties, such as resistance to heat, water, and erosion.

With such practicality, asbestos-embedded items were to be found everywhere on the vessel with insulation being the most common, but also including deck covering materials, gaskets, pipes, and adhesives.

Due to its confirmed toxicity, asbestos was banned in the United States from most industries, but this does not change the fact that there are entire generations of veterans that have done their service in toxic mediums breathing in asbestos disturbed from its compounds because of maintenance and repair jobs that were inevitable for the good functioning of the vessel.

Have You Been Exposed to Asbestos on the USS Coral Sea (CV-43)?

If you think you have been exposed to asbestos on the Coral Sea, it would be useful to have an asbestos expert standing by you. Call us at 760.621.6147 to learn more.