The USS Darby (DE-218) was a Buckley-class destroyer escort. The vessel was named in honor of Ensign Marshall E. Darby who during the attack of the Japanese on Pearl Harbor fell overboard as he was doing duty on board of the USS Okinawa. The most notable operations in which the USS Darby was involved were those that occurred during World War II, deployments that brought the ship two battle stars, as a way to bring awareness to the efforts of the crew that was in charge of the protection of other destroyers sailing in convoy. 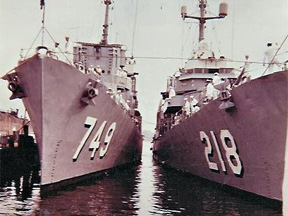 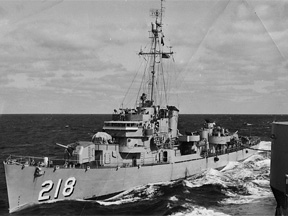 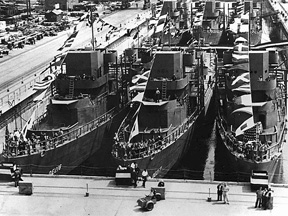 The USS Darby (DE-218) was built by the Philadelphia Navy Yard. Mrs. M. E. Darby acted as a sponsor and on 15 November 1943, when the ship was placed in commission, Commander D. D. Humphreys was assigned as commanding officer. In January 1944, the Darby left Philadelphia and joined Task Force 31 while sailing in the Solomons. Beginning with the month of July, the vessel was ordered to escort ships that were traveling in a convoy in regions such as Guadalcanal, Eniwetok and Manus. In November 1944, the Darby took part in hunter-killer exercises in the area of Ponape but it also engaged in bombardment training on the shore of the Tonga Islands.

Between 7 and 26 December, the ship was a part of exercises taking place in New Guinea as a way to prepare for the attack on Lingayen. By January the next year, the Darby was doing screening duty for transport ships that were headed to Lingayen in support of the American troops that were already there. The vessel operated as an escort until 28 February, when it was commanded to Ulithi to assist a convoy that was transporting garrison forces to Iwo Jima. By the time the war ended, in August 1945, the Darby was engaged in training exercises in the region of Hawaii, but it was soon ordered to bring back to the United States soldiers that were eligible for discharge.

The ship was back to active duty in October 1950, when it filled the role of flagship for the newly put together Escort Squadron 8. In June 1951, the Darby docked at the Newport News Shipyard where it was provided with upgraded anti-submarine guns. After completing the overhaul, a brief period of shakedown in the Caribbean and in the Atlantic followed. From August to October, the ship took part in Operation Mainbrace, an exercise coordinated by NATO which gave it the chance to sail to places such as Scotland and Norway.

In 1958, from January to April, the Darby made ports call at Trinidad and at Rio de Janeiro as part of its deployment off Ascension Island during which it was tasked with missile tracking missions. In February 1959, the ship was a part of the training operations taking place at the Naval Reserve off Baltimore. During these missions, which lasted until 1962, the Darby had the opportunity to make a port visit to Puerto Rico. On 19 March 1960, the ship crashed into a Swedish merchant vessel in the area of Chesapeake Bay. As a result of the collision, 13 servicemen were wounded and two died.

The last notable mission of the USS Darby that was made known to the public was related to the ship spending the month of January 1967 carrying armed forces and artillery to the American bases situated off Vietnam.

Hundreds of thousands of people that served in the United States Navy had to do their duty in mediums that were highly toxic without being aware of the dangers. It has become a well-known fact nowadays that U.S. veterans are highly at risk of developing several forms of cancers due to the fact that they spent a significant amount of time interacting with a toxic mineral called asbestos.

The Navy was especially interested in the mineral since it displayed impressive chemical and physical properties, such as resistance to corrosiveness and fire, while at the same time being flexible and strong. Therefore, until asbestos usage was regulated in the 1970s, the ships and shipyards hosted the toxic substance in massive amounts.

The areas constituting the highest danger of exposure were those located below the deck for the reason that when maintenance was performed and asbestos dust would fill the air, the narrow spaces would not allow for the concentration of toxic particles to lower, meaning that the workers on site were doomed to breathe in the damaging fibers.

Have You Been Exposed to Asbestos on the USS Darby (DE-218)?

We can help you with more information about how asbestos affected the lives of Navy veterans. If you decide to file a claim, we can put you in touch with experienced asbestos attorneys. For more information, call us at 760.621.6147.