The USS Deuel (APA-160) was a Haskell-class attack transport. The name of the vessel was inspired by the denomination carried by two counties in the United States, i.e. Deuel County, one located in Nebraska and the other in South Dakota. The USS Deuel had distinguished itself through its service during World War II but also during the Vietnam War. For its participation in the former, the vessel was awarded two battle stars for the tireless effort it had demonstrated while carrying servicemen tasked with invasion missions ashore in the conflict zones. 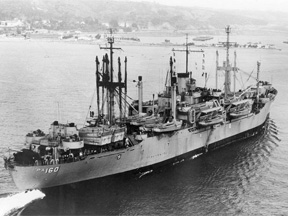 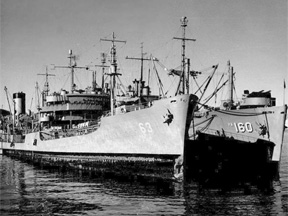 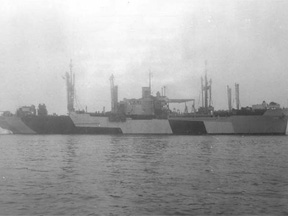 The USS Deuel was built by Oregon Shipbuilding Corporation in Portland, Oregon. The vessel had Mrs. J. Himmelright as a sponsor and Captain D. G. McMillan commanding when it was commissioned in October 1944. In November 1944, the ship left San Diego and took part in training exercises in the area of Pearl Harbor after which it stationed at Saipan in anticipation of the invasion of Iwo Jima. In February 1945, the Deuel participated in the landing of units of the 5th Marine Division as part of the initial attack. For the next six days, the vessel kept watching over the area, taking on board casualties and carrying them to hospitals in Guam in order to receive proper care. In April, the ship departed Ulithi where it had been docked for as long as its transportation duty in Okinawa lasted, carrying armed forces there while also embarking injured men to take back to Saipan.

In the period between May and August 1945, the Deuel conducted transport operations in the waters of the Philippines. By September, the ship was carrying troops to Japan in preparation for occupation missions. The Deuel was also a part of Operation Magic Carpet until January 1946, when it was passed the responsibility of transporting men from the Pacific to the west coast. At the end of its involvement in the operation, the ship returned to the east coast where it was placed out of active duty in May 1946.

With the Korean War erupting in 1950, the ship was placed back in active commission, as it was the case with many other vessels in the U.S. Navy. Beginning with October, the Deuel was already performing training exercises off the east coast and in the Caribbean. In 1951, the Deuel had to transport a Naval Beach Unit and Shore Regiment to Thule, Greenland. From August 1952 to February 1953, the vessel participated in Operation Mainbrace, an amphibious exercise that was put together by NATO in the waters of Denmark. When it completed its operations there, the ship moved to the Mediterranean to report to the 6th Fleet. In 1953, from August to October, the Deuel was deployed to Yokohama in Japan, transporting Marine Corps to the bases in that location. The following year, the ship took marines to exercise landings on the Vieques island and then it resumed operations off Norfolk. In 1955, the Deuel was transporting a naval construction battalion to Casablanca, French Morocco, an operation similar to the one in 1951. In June 1956, the ship was decommissioned and in 1974, it was sold for scrapping.

In the period between the 1930s and the mid-1970s, the United States made use of a cheap and abundant mineral called asbestos in most of its industries from construction to textiles. The substance is flexible and durable but perhaps its most desired quality comes from the fact that it has a high resistance to fire, making it a great choice for an insulating material.

With World War II exhausting resources, asbestos was soon spoken of in terms of a miracle mineral, due to its wide availability and affordable costs. The military was especially fond of the material, purchasing it in large quantities and pouring the toxic fibers in tools, equipment, and ships. Due to the qualities it displayed, the mineral found popularity with the Navy and shortly it was covering the majority of vessels in some form of mixture. Thus, asbestos-embedded materials were to be found covering pipes, valves, and gaskets, while also being ingrained in the flooring as well as in the walls of the rooms where the personnel slept.

If a loved one that has done duty in the Navy has shown signs such as shortness of breath, fatigue and incessant coughing fits, they should inform their doctor of their possible exposure to asbestos and get checked appropriately.

Have You Been Exposed to Asbestos on the USS Deuel (APA-160)?

If you served on the USS Deuel (APA-160) and you would like to get in touch with your former shipmates, we have a massive database that allows us to help you in this matter. Call us at 760.621.6147 to learn more.