The USS Diamond Head (AE-19) was a Mount Hood-class ammunition ship. The vessel was the first one among the others in the U.S. Navy to be named after the extinct volcano located on the island of Oahu in Hawaii. The USS Diamond Head was mainly preoccupied with the transportation of naval ammunition to the fleet it would be assigned to while on deployment. The vessel saw service during the Vietnam War, having participated in Phase II and Phase III of the Vietnamese Counteroffensive, receiving 3 service medals for its contribution. 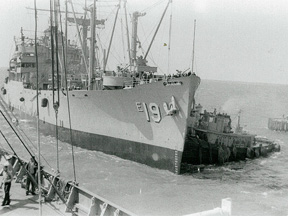 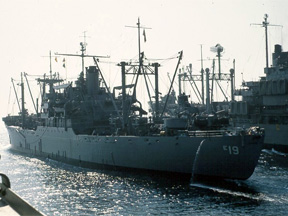 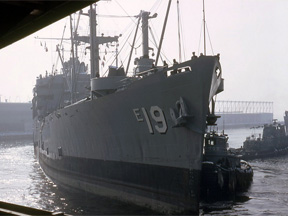 The USS Diamond Head was built by the North Carolina Shipbuilding Company in Wilmington, North Carolina. Mrs. D. Bill sponsored the vessel and on its commissioning day, 9 August 1945, Lieutenant Commander F. C. Snow was assigned commanding officer. In September 1945, the ship was ordered to Norfolk Commander, Service Force in the Atlantic. By August 1946, the ship had been placed into the reserve fleet and, thus, out of active duty. This changed in August 1951 when the U.S. Navy was responding to the request of having more naval forces in the key conflict zones of the Korean War. As part of its duty, the Diamond Head was to report to the United States Atlantic Fleet, mainly taking over logistics operations. Through the 1960s, the ship conducted operations off the east coast but also in the waters of the Caribbean while also accompanying the 6th Fleet during five deployments in the Mediterranean.

In March 1967, the Diamond Head departed from Norfolk, Virginia to Vietnam for a deployment that was scheduled to last nine months. Records show that just between the months of May and October, the ship supplied ammunition for almost 200 vessels, which meant a transfer of approximately 12,000 tons of artillery. The crew, however, were also allowed periods of rest and recreation in which there typically would be port visits to locations such as Hong Kong, Manila or Panama City. In March 1973, the Diamond Head was struck from the Naval Vessel Register and in 1974, it was sold for scrapping.

Although every branch of the U.S. military has used asbestos, it is the Navy that is known to have purchased the largest amounts of the mineral. The reasoning for this might be quite obvious since besides using the fibers for building tools and various pieces of equipment, in the same way that other parts of the military would, the Navy would also pour the mineral in the construction of ships and when the size of the vessels is taken into consideration then one can understand why this particular section of the military is credited with the highest usage of asbestos.

With World War II and then the Vietnam War pressuring for more American naval forces to be present in the combat areas, the demand for shipbuilding increased drastically in that period and with it the usage of asbestos. Asbestos has a low electrical conductivity and it is flexible and strong which gave manufacturers the idea to add it to other materials in order to make them more durable. Until the 1970s when the majority of asbestos uses were banned, Navy ships were covered in asbestos insulation, putting everyone in service at risk of exposure.

Have You Been Exposed to Asbestos on the USS Diamond Head (AE-19)?

If you would like more information on the topic of asbestos exposure in the U.S. Navy, we can offer you answers. We can also help you find your former colleagues. To learn more, call us at 760.621.6147.