The USS Dixie (AD-14) was a Destroyer Tender. The ship was the second one of its class. Its main activities were focused on providing support to other warships.

The USS Dixie was awarded 5 battle stars for its service during the Korean War.

In 1981, the ship had the honor of being able to fly the first Navy Jack for being the vessel with the longest activity in the Navy. 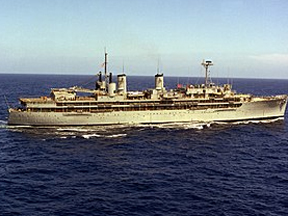 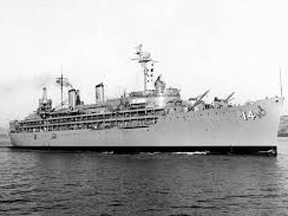 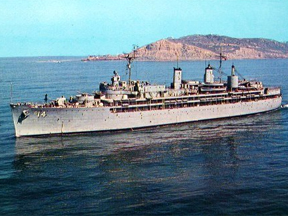 The USS Dixie was built by New York Shipbuilding Corporation in Camden, New Jersey. Sponsored by Mrs. A. C. Pickens, the ship was commissioned on 26 April 1940 with Lieutenant Commander G. H. Bahm in command. On 20 June 1940, the Dixie departed Norfolk, Virginia in order to provide support to destroyers located at Pearl Harbor. In October, the ship left the area and sailed to San Diego, California to engage in operations of the same nature.

On 7 December 1941, when Pearl Harbor was attacked by the Japanese, the Dixie was in the process of undergoing an overhaul at Mare Island Navy Yard. However, the vessel promptly sprung into action and helped warships prepare for combat. From March to November 1942, the vessel went back to Pearl Harbor to tend the ships of the Fleet that were in need of supplies and repairs. Supporting the operations taking place in the Solomons Islands, from November 1942 to March 1944, the Dixie was back and forth between Noumea and Espiritu Santo. The Dixie also served at the Ulithi enormous Fleet base until February 1945.

During the summer of 1946, the ship was at Bikini Atoll engaged in Operation Crossroads that focused on the experimentation of atomic weapons. In 1947 and in 1949, the Dixie was headed to the Far East and was stationed at Tsingtao to help with maintenance issues destroyers that were on watch on the Chinese coast. After leaving China, the ship became the headquarters for the American consul and charge d'affaires at Hong Kong.

The Dixie continued her service while tagging along Commander, Cruiser-Destroyer Force, Pacific Fleet, but also with deployments in the Far East, sailing to locations such as Sasebo, Japan and Subic Bay, Philippine Islands. In 1959, and then in 1960, the ship departed San Diego briefly again in order to provide tender assistance for the Seventh Fleet. The Dixie began its decommissioning process on 15 June 1982. The same day, the ship was taken off the Naval Vessel Register and it was to be disposed of by scrapping at Kaohsiung, Taiwan.

Despite the fact that as early as 1939, the year in which the Navy Surgeon General released an annual report discussing in a comprehensive manner the way in which activities that were taking place at the New York Navy Yard constituted a danger to the lives of those on the premises, asbestos, a now-banned toxic material, continued to be heavily used in ship making. Those in command at the time put aside the concerns of a thorough study done by an authority in the matter, like the Surgeon General, and paid no serious attention to something carrying such an alarming title as Hazards of Asbestosis.

Even if too little, and certainly too late, the link between asbestos exposure, while serving in the US Navy, and veterans suffering from illnesses caused by the mineral is today acknowledged as a definitive fact. What was dismissed as an unfounded controversy in the late 1930s and early 1940s represents a grave reality in the present-day.

Navy veterans, therefore, should get checked regularly to make sure that asbestos did not affect them in any way. It can be especially tricky since diseases could take up to 30 years to finally show signs in those affected. It is easy to see how living a life in constant fear of a life-threatening disease surfacing seemingly out of nowhere could be psychologically draining. On top of that, symptoms of an illness like mesothelioma, for example, begin to appear only when the cancer is already at an advanced stage. If you or somebody you know is affected by an asbestos-related disease, you should discuss the matter with a lawyer in order to recover damages.

Have You Been Exposed to Asbestos on the USS Dixie (AD-14)?

We can assist you in better understanding your exposure to asbestos. We can also help you reach other people you served within the Navy. Call us at 760.621.6147 for more information.