The USS Dwight D. Eisenhower is still actively serving for the United States Navy with a replacement for it being scheduled for 2029, when a Gerald R. Ford-class carrier, the USS Enterprise (CVN-80), is supposed to be taking its place on duty. 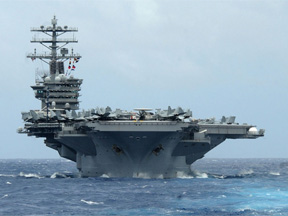 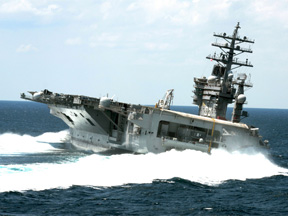 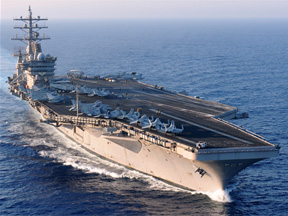 The USS Dwight D. Eisenhower was built at the Newport News Shipbuilding Company in Virginia. The ship was sponsored by Mamie Doud-Eisenhower and on its commissioning day, on 18 October 1977, it had Captain William E. Ramsey as commanding officer. As part of its shakedown training, the vessel was ordered to the United States Atlantic Fleet for a little over a year. By January 1979, the Dwight D. Eisenhower was deployed for the first time and its destination was the waters of the Mediterranean. In the month of July of the same year, the ship went back to the Norfolk Naval Station.

In 1980, when the Iran hostage crisis occurred, the ship, among many other units of the U.S. Navy was commanded to the Indian Ocean with a direct order from President Carter. Between January and July 1982, the Dwight D. Eisenhower was back to the Mediterranean Sea and during this tour 11 people on board died as a result of its logistics aircraft, Mamie, crashing on 2 April near Souda Bay in Crete. During this same deployment, the vessel took part in the evacuation of the Americans held hostage at U.S. Embassy in Lebanon as a civil war took over the country.

Starting April 1983 until December, the ship departed in another deployment during which it participated in a few exercises coordinated by NATO. During the deployment, the vessel was one of other U.S. ships that had been threatened by Muammar al-Gaddafi when he declared that he will make a 'red gulf of blood' out of the Gulf of Sidra if any foreign vessels would sail the waters claimed by Libya as theirs. On October 26, the Dwight D. Eisenhower had to rush to Beirut where suicide attacks had murdered almost 300 American and French soldiers three days prior to its departure to that location.

In October 1985, the ship entered the Newport News Shipbuilding and Drydock for a complex overhaul that ended up lasting for 18 months. After completing maintenance and renovation, the ship had an upgraded communications system and new anti-submarine warfare weaponry. In April 1987, the Dwight D. Eisenhower re-joined the fleet and by February 1988, it began another tour in the Mediterranean.

In 1990 when its seventh deployment in the Mediterranean ended, the tour had become a worldwide commemorative event celebrating the 'Dwight D. Eisenhower Centennial' meaning there had been 100 years since the birth of the former U.S. President.

In August 1990, when Iraq invaded Kuwait, the vessel began operating in the Red Sea, becoming the first carrier to have done so in the history of the U.S. Navy. Its main goal was to maintain readiness as a striking force in the case in which Iraq attempted to invade Saudi Arabia. In December 1991, the ship was ordered to the Persian Gulf to participate in Operation Desert Storm alongside multinational forces.

In 1994, the Dwight D. Eisenhower left for a six-month tour that was primarily focused on its aircraft supporting Operation Southern Watch and Operation Deny Flight. It was also during this deployment that women were part of a crew on a combatant ship in the United States Navy. In July 1995, the Dwight D. Eisenhower entered the Newport News Shipbuilding for another major overhaul that was completed in January the following year. In January 2007, the U.S. Navy was targeting Al-Qaeda missions occurring in Somalia. During these operations, the vessel was ordered to the Indian Ocean to be in charge of air cover and to help with the evacuation of casualties.

In February 2009, the ship left for the waters of the Arabian Sea and served as flagship of Carrier Strike Group 8. The vessel also had on board Carrier Air Wing 7 as well as the crew of Commander, Destroyer Squadron 28. Together, the units supported Operation Iraqi Freedom and Operation Enduring Freedom. In January 2010, the ship was sailing to the areas in the Middle East in which were operating the 5th Fleet and the 6th Fleet. On February 2013, the vessel was once more conducting missions alongside Strike Group 8 in the Middle East.

In November 2016, reports by the Military Times were stating that since the month of June, when the USS Dwight D. Eisenhower had joined the operations led by the U.S. Navy against ISIS, the ship launched a total of almost 1,100 ISIS targets located in Iraq and in Syria. Although work on a brand new USS Enterprise (CVN-80) was started in 2018 with the objective of having the new vessel relieve the USS Dwight D. Eisenhower in the future, there is currently no exact inactivation date, which means that the latter will continue its service until further instructions are received from the U.S. Defense Department.

As World War II and the Korean War were demanding more and more resources, the U.S. armed forces and especially the Navy turned to a material that had already attained popularity on the market in those days, i.e. asbestos. The mineral had proven itself useful in construction, being resistant to high temperatures but also being strong and durable, characteristics that attracted the interest of the shipbuilding industry. Soon, all the ships that were being in construction were lined with asbestos mixtures as a way of insulating them, exploiting the cheap and plenty mineral.

At its peak, it is reported that the shipbuilding industry had approximately 4.3 million workers struggling to meet the demands of World War II. At the very least, it is this number of people that had been exposed to the mineral on a regular basis, which is troublesome to consider nowadays when the substance has been confirmed as being highly toxic to the health of humans. In constructing the ships, as well as during remodeling periods or simply as part of maintenance work, workers would constantly create asbestos dust that they would end up inhaling not knowing that the fibers are extremely damaging and had the potential of developing into cancerous illnesses.

Have You Been Exposed to Asbestos on the USS Dwight D. Eisenhower (CVN-69)?

We can help you with information about the ways in which asbestos exposure had happened on ships and in shipyards. We can also help you get in touch with former shipmates. Call us at 760.621.6147 to learn more.