The USS Edmonds (DE-406) was a John C. Butler-class destroyer escort. The ship was in the possession of the Navy as World War II was taking place. The main duties of a vessel of this kind were tied to escorting and offering protection to other warships.

The most notable contributions of the USS Edmonds are its operations during World War II and the service from the Koren War period, the former earning the ship five battle stars and the latter another two. 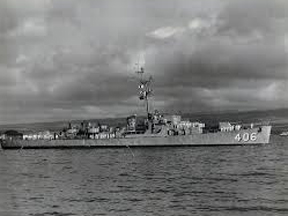 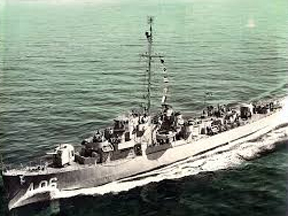 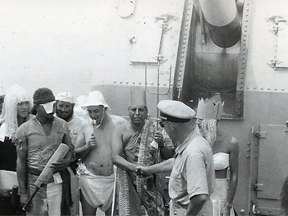 The USS Edmonds was built by Brown Shipbuilding Co., Houston, Texas with Mrs. F. Campbell as its sponsor. The commissioning occurred on 3 April 1944, with Lieutenant Commander C.S. Barker, Jr. in command. After testing the workings of the ship for a bit off Galveston, Texas, the vessel then steamed to Bermuda, British West Indies to undergo shakedown training under Commander Operational Training Command within the Atlantic Fleet. The training was successfully finished by 22 May 1944, after which it was headed to Charleston Navy Yard in Boston, Massachusetts for a post-shakedown overhaul.

On 8 June 1944, the USS Edmonds left for Pearl Harbor by taking the route of the Panama Canal. While sailing around in the Pearl Harbor waters, at midnight on 4 July 1944, the ship alongside two other destroyers began the search for S-28, a submarine that went missing in the area close to Oahu. The only thing they encountered was an oil layer floating around with no survivors found. On 6 July 1944, the ship departed for the Marshall Islands, escorting mainly CVEs. The Edmonds returned to Pearl Harbor just in time to be a part of the reception held in honor of President Roosevelt on 25 July 1944. The vessel left Pearl Harbor yet again on 28 July 1944, screening a convoy of three merchant ships. However, the Edmonds only offered the convoy protection for a part of its journey as the destroyer escort proceeded to take another course once they all reached Guadalcanal. The new destination was Manus, Admiralty Islands and upon arrival, the ship was taking commands from Commander 7th Fleet. On 10 September 1944, the Edmonds was on another escort mission, a complex one involving protection against air, surface and submarine assaults. On 7 October 1944, the Edmonds returned to Manus where two days later, Lieutenant Commander John S. Burrows, Jr. replaced Commander Christopher S. Barker, Jr. as the commanding officer on the ship.

The Edmonds was assigned to participate in operations that led to the first invasion of the Philippines at Leyte Gulf with its main duties being to screen CVEs. While entering Leyte Gulf on 28 October 1944 for fueling, the vessel had to fight off a few air attacks. On 3 November 1944, the Edmonds returned to Manus alongside other destroyer escorts traveling in a circular screen in order to protect the battleships after the confrontations that occurred at Surigao and Samar. As a reward for the outstanding results of this campaign, Lieutenant Commander Burrows was awarded the Legion of Merit. On 11 December 1944, as the Edmonds was sailing around the Marshall Islands, the ship intercepted a submarine that started firing as soon as it realized its cover was compromised. A torpedo was headed directly toward the bow of the Edmonds but missed narrowly.

After the holidays, the Edmonds was engaged in another operation in Luzon. Primarily, the ship had to support battleships in entering the China Sea that was under the watch of the Japanese. The Edmonds shot down a Japanese plane for the first time on 5 January 1945, as it had confirmation that it was on a suicide mission. On 17 January 1945, the vessel departed for Ulithi to report for duty to Commander 5th Fleet. Between 10 February and 27 March 1945, the ship was part of the Iwo Jima operations. The Edmonds managed to sink one mine and further come to the rescue of the crew from two TBM Avengers.

At night, on 21 February 1945, the USS Bismarck Sea (CVE-95) was sunk as a consequence of having been hit by a suicide Japanese plane. The Edmonds alongside other three screening ships began a rapid search of survivors in the area. The mission was particularly difficult as it was night, the sea waters were agitated and the air attacks continued even after they had managed to sink the vessel. The Edmonds was in charge of the rescue mission and it ended up with 378 survivors on deck, among which were the Commanding Officer and the Executive Officer. Records note that 30 people, officers and crew alike, of the Edmonds ship voluntarily jumped in the heavy waters to help the survivors, with six of them having received decorations from Commander 5th Fleet for their remarkable actions.

Operating off Okinawa, on 4 May 1945 and 11 May 1945, the Edmonds sank tow mines considered a threat for the CVEs that were being escorted. The vessel was also involved in a rescue mission where it brought to safety the crew of a carrier torpedo plane. From 3 to 10 June 1945, the Edmonds was also closely involved with the conquest of Iheya Shima and Aguni Shima in the Okinawa. After it returned from Okinawa, the Edmonds docked in San Bay, Leyte Gulf on 2 July 1945. In the following three months, the ship was engaged in many escort operations, consistently visiting the New Guinea, Ulithi and Okinawa. On 15 August 1945, as the vessel entered Leyte Gulf the news broke of American victory in the Pacific. On 8 October 1945, the Edmonds was docked at Manila when it received orders to return to the United States via Pearl Harbor. Upon arrival, the ship was decommissioned but the period of inactivity only lasted for a while since the Korean War called for its recommissioning which happened on 28 February 1951. The Edmonds departed for the Far East on 29 October 1951.

In 1960, the Edmonds steamed to a new home port located at Treasure Island, California. The vessel was engaged in training exercises until January 1962, when it was commanded to sail for the Far East again, specifically Hong Kong, Yokosuka and Sasebo. In December 1964, the vessel was released of active duty and on March 1965, it was decommissioned at Mare Island Naval Shipyard. The Edmonds was struck from the Navy List on 15 May 1972 and was sold for scrapping to General Metals of Tacoma Inc.

One unfortunate thing that all the ships from the Navy had in common until the 1970s was that they were all built with materials containing asbestos, which was a fibrous mineral easy and cheap to acquire, but that was also later confirmed to be extremely dangerous to the health of those who inhaled it or ingested it.

As a consequence of asbestos being used in virtually everything related to shipbuilding and maintenance jobs in the U.S. Navy, a large number of people were routinely exposed to the toxic substance. Any action on the part of the personnel that would disturb the asbestos in some way and cause it to become airborne would pollute the area and put at risks not only those directly interacting with the mineral but the rest of the crew just as much.

The USS Edmonds (DE-406) was a John C. Butler-class destroyer escort. The ship was in the possession of the Navy as World War II was taking place. The main duties of a vessel of this kind were tied to escorting and offering protection to other warships.

The most notable contributions of the USS Edmonds are its operations during World War II and the service from the Koren War period, the former earning the ship five battle stars and the latter another two.

Have You Been Exposed to Asbestos on the USS Edmonds (DE-406)?

If you would like to learn more about the ways in which asbestos was used in the Navy, we can provide you with that knowledge. We can also help you reconnect with your former shipmates. For more information, contact us at 760.621.6147.