The USS Elkhorn (AOG-7) was a Patapsco-class gasoline tanker.

During its service, the USS Elkhorn (AOG-7) had to transport gasoline to whichever vessels were in need of it. The ship had eighteen commanding officers.

The USS Elkhorn (AOG-7) received one battle star for its efforts during the Korean War and eight more for its participation in the Vietnam War. 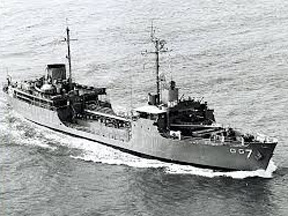 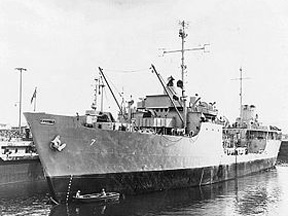 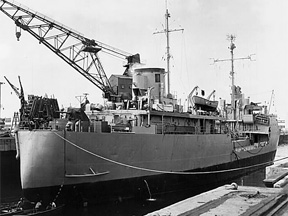 History of the USS Elkhorn (AOG-7)

The USS Elkhorn was built by Cargill Inc., Savage, Minnesota. The ship was commissioned on 12 February. It had Mrs. J. A. Flynn as a sponsor and Lieutenant T.A. Norris assigned in command. In September 1944, the ship departed to the South Pacific for operations at Milne Bay, New Guinea in which it took on the role of a station tanker.

The Elkhorn left on several tours to Manus in order to replenish vessels that were orchestrating the invasion of Morotai that eventually occurred in September 1944. The ship also did service at Milne Bay until March 1945 when it docked at Leyte.

The Elkhorn sailed Philippines waters up until December 1945, when it departed for the West Coast in the United States and entered a period of repairs. Afterward, until 1962, the vessel was on duty with the U.S. Pacific Fleet. During this time, the Elkhorn was deployed in the Far East, operating mostly in Southern and central Pacific. At the time of the Korean War, the ship was sailing closely to Japan and Korea, most notably during the years of 1951, 1953, 1956 and 1957.

During the Vietnam War, the Elkhorn was fueling ships involved in the operations there, and in 1970, it resumed its missions off the coast of Vietnam once more for the spring offensive. In May 1972, the ship was sold to the Republic of China, but before its transfer, it was placed out of commission on July 1972.

Entire generations of veterans from all the branches of the U.S. military have been exposed to asbestos as the mineral was a big demand in the 20th century, especially in the first half that was ridden with wars. Air Force, the Army, but the Navy, in particular, acquired asbestos equipment in large amounts due to the desired physical properties of the mineral, such as its durability, flexibility and resistance to intense heat.

In order to protect the people on board, such a material seemed like the perfect solution for missions at sea. However, in the present time, people who served in the U.S. military and more so than others those who reported for duty in the Navy started to frequently come forth speaking about their health having been severely damaged by their time working in asbestos-polluted spaces.

Beginning with the 1970s, asbestos was classified as a hazardous substance and its use was severely restricted in the United States and banned in the majority of the civilized countries around the world. One of the consequence of this was that orders were given for Navy ships to be cleared of asbestos products, and while the initiative is to be appreciated, it does not do much for people in service that had already been exposed to it.

Have You Been Exposed to Asbestos on the USS Elkhorn (AOG-7)?

If you are affected by an asbestos-related disease, we can help you with valid information about the exposure to the toxic mineral. We can also put you in touch with lawyers who can help you file an asbestos claim, if that is what you intend to do. Call us at 760.621.6147 for more information.