The USS Falgout (DER-324) was an Edsall-class destroyer escort. The vessel was built during the time of World War II.

The USS Falgout was named in honor of the heroism of George I. Falgout who was killed in action in the Naval Battle of Guadalcanal in 1942.

The main duty of the ship was to ensure the safety of other vessels against aircraft and submarine assaults. 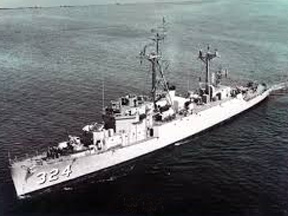 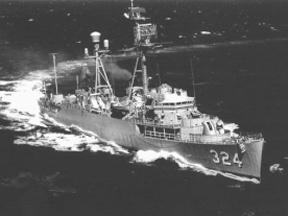 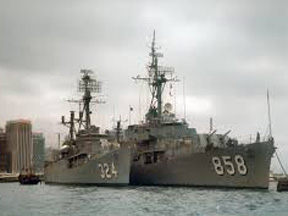 The USS Falgout was built by Consolidated Steel Corporation in Orange, Texas. The ship began the commissioning process on 15 November 1943. It had Mrs. H. J. Guidry as a sponsor and Lieutenant Commander H. A. Meyer commanding. In December 1943, while undergoing shakedown exercises the Falgout came to the rescue of 11 people that survived a torpedo attack on their SS Touchet and escaped on a lifeboat. After the vessel completed the shakedown training, it left on eight tours to North Africa between February 1944 and June 1945.

While sailing the Mediterranean in April 1944, guarding the convoy USG 38, there was a sudden German aircraft attack. Even if the Falgout and the other escorts responded promptly, before the attackers were driven away, they managed to blow up SS Paul Hamilton and to sink the USS Lansdale. While the rest of the escorts were looking for survivors and leading other damaged vessels to the nearest ports for repairs, the Falgout was ordered to stay with the rest of the fleet on the original route and to escort them to their destination, which was Bizerte. On the same deployment, on the way back from Bizerte the convoy was under attack again, this time by submarine forces. On 3 May 1944, one of the escorts was hit by a torpedo but managed to stay afloat, but on 5 May, another escort was hit and the impact was so powerful that it sank the ship. The rest of the escorts, including the Falgout, stayed on their route and led the convoy to their homeport.

In June 1945, the Falgout arrived at Balboa in the Panama Canal and until 13 December 1945, the ship helped training submarines and offered guidance in defense issues off Nicaragua and Costa Rica. In April 1947, the ship was decommissioned at Green Cove Springs, Florida. However, the Falgout was to return to the U.S. Navy after being converted to a radar picket escort vessel, meaning that the vessel had installed a powerful radar in order to more quickly and accurately detect air attacks. The vessel was commissioned again in June 1955, with Lieutenant Commander Walter P. Smiley as commanding officer. nAfter completing shakedown, the Falgout was to serve with the Continental Air Defense Command. The Falgout acted as a radar picket, putting to good use the new technology it had on board for the Early Warning System. nFor a little over ten years, from March 1959 to June 1969, the Falgout was operating at Pearl Harbor continuing its service for the United States. During that time, from 1966 to 1969, the ship participated in Operation Market Time, in which the combined forces of the U.S. Navy and South Vietnam disrupted the attempts of North Vietnam to sneak war materials and supplies in regions from South Vietnam during the Vietnam War.

The USS Falgout was placed out of commission on 10 October 1969, at Mare Island, Vallejo, California. It was taken off the Navy Register in 1975 and in January 1977, the vessel was sunk as a target during naval exercises.

People that did military service for the United States prior to the 1970s were not aware at the time of the dangers most of the equipment and living spaces constituted for their health. The component that increased their chances of developing a cancerous disease was asbestos, a fibrous mineral known to be the cause of mesothelioma.

With World War II intensifying and with the demand for more military action, the government of the United States approved asbestos usage in great amounts, despite the fact that there were medical experts advising caution in exposing people to the material based on their research suggesting links to cancer of the lung. It was not until the late 1970s that these claims reached the larger public and the harmful effects of asbestos became a confirmed fact.

The Navy especially used numerous objects containing asbestos mixtures when building ships and submarines but also when doing repairs and upkeep work. The flame-retardant qualities of the mineral increased its use as an insulating material, making asbestos a great demand for the U.S. Navy and, thus, condemning hundreds of thousands of people to the risks of developing asbestos-related illnesses.

Have You Been Exposed to Asbestos on the USS Falgout (DER-324)?

We can help you understand the ways in which the U.S. Navy made use of asbestos and how the exposure happened on board. We can also help you get in touch with your former shipmates. Call us at 760.621.6147 for more information.