USS Firedrake AE-14 was a Mount Hood-class ship which was used by the US Navy for 22 years as an ammunition provider. This vessel embarked on its first journey in 1944 and it served the Navy in different military operations around the world. The USS Firedrake was deployed during World War II, the Vietnam War, and the Korean War.

For its bravery, the ship was awarded 6 battle stars: two for taking part in the operations organized during World War II and 4 for its service in the Korean War. 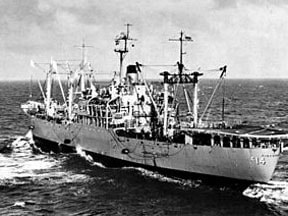 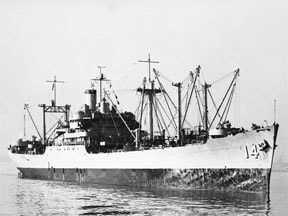 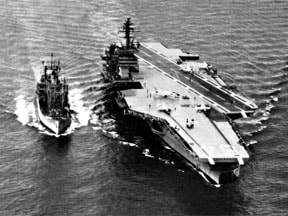 History of the USS Firedrake (AE-14)

The North Carolina Shipbuilding Co. launched this vessel for the first time on 12 May 1944. Its first name was Winged Racer and it was sponsored by Mrs. R.M. Kitchins. The Navy took possession of the vessel in June 1944 and commissioned it on 27 December 1944. The USS Firedrake began its service by participating in operations during World War II. The ship was sent to provide ammunition in the Asiatic-Pacific Theater. One of the campaigns it took part in is the Okinawa Gunto operation which took place from 20 March to 30 June 1945. After it provided ammunition for the ships that were engaged at Okinawa and the Kerama Island, the USS Firedrake sailed to the Leyete Gulf. Here, it was used in issuing explosives until November. Afterward, the vessel sailed back home and it was decommissioned in 1946 in Texas and placed in reserve.

In 1951, the ship was recommissioned for the purpose of taking annual duty tours in the Western Pacific. In the next two years, the USS Firedrake performed these duty tours and took part in the Korean War operations. Some of the campaigns it participated in were the Second Korean Winter, the Korean Defense Summer-Fall 1952, the Third Korean Winter in 1953.

In January - February 1955, the vessel was assigned to China and participated in the evacuation of the Tachen Islands.

After the war ended, the USS Firedrake was decommissioned in October in Vallejo, CA and struck from the Naval Register.

All the ships used in the military before and after World War II were built using asbestos. This mineral has amazing heat resistance so, it was used as an efficient insulator. Asbestos was present virtually everywhere on the military ships. On the one hand, this material brought great advantages to the army because it was effective, relatively affordable and it did a great job as an insulator. However, on the other hand, it had great drawbacks when it came to human health. Theoretically, everyone who worked aboard the military ships or was involved in their construction was exposed to the risk of developing asbestos-related diseases.

The range of illnesses that can be caused by exposure to this toxic mineral is wide. Commonly, a person who has worked around or with asbestos is more likely to develop a lung condition. Asbestosis, mesothelioma, or lung cancer are some of the diseases that occur as a result of inhaling asbestos particles. Once the substance gets into the lungs, it causes irreparable damage which the victims is initially not aware of. Because asbestos-related diseases have a very long latency period, it can take decades before the person is diagnosed.

Veterans who served in the army decades ago are some of the most common patients diagnosed with conditions linked to asbestos. Their exposure is the result of working in a contaminated environment for years. Some of the places where the US army used the highest quantities of asbestos are ships. Therefore, if you or someone in your family worked aboard of the USS Firedrake, it's important to get tested for asbestos. If your health or the health of a beloved one like your spouse or children was affected by this toxic substance, you are entitled to a compensation. With the help of an experienced lawyer, you can file a successful claim for your illness and receive an award.

Have You Been Exposed to Asbestos on the USS Firedrake (AE-14)?

We want to help you learn more about the potential risks of asbestos exposure. We've built this website as a response to the increasing number of veterans who have been diagnosed with asbestos conditions and seek support. We can help you get in touch with these people who might have been your former shipmates so that you can find out more about the risk of asbestos exposure on your ship. We are available to answer your questions and offer you guidance in case you want to claim your right to a compensation. Call us at 760.621.6147 for more information.