The USS Franklin D. Roosevelt (CV-42), the second among the three Midway-class aircraft carriers was nicknamed as "Foo-De-Roo", "Rosie", and "Swanky Franky". This ship was the first aircraft carrier in the US Navy to be named after a President of the United States. The USS Franklin D. Roosevelt was initially launched with the name, "Coral Sea" but on May 8, 1945, the ship was renamed as Franklin D. Roosevelt. The ship conducted most of the operations in the Mediterranean waters as a part of the United States Sixth Fleet and in 1950, the vessel carried nuclear weapons to the sea for the first time.

The USS Franklin D. Roosevelt was the first ship in its class that underwent the SCB-110 reconstruction and also was the first carrier to win three Admiral J. H. Flatley awards for aviation safety. The vessel served the nation for nearly two decades before it was decommissioned in September 1977. 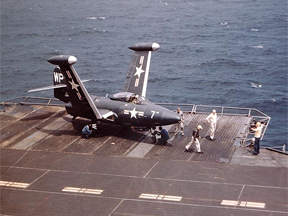 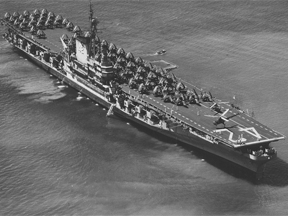 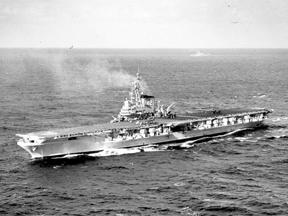 The USS Franklin D. Roosevelt, launched by New York Naval Shipyard on April 29, 1945, was commissioned on October 27, 1945, with hull number CVB-42 (Coral Sea). The ship was redesignated as an attack aircraft carrier (CVA-42) on October 1, 1952, and later on as multi-purpose aircraft carrier (CV-42) on June 30, 1975. In the spring of 1946, the ship was deployed with the Eighth Fleet for training exercises and was sent to the Mediterranean later that year. The ship participated in operations with the Sixth Fleet near Southern Europe and regularly carried conventional and nuclear-armed aircraft.

Between 1954 and 1956, the ship underwent modernization on the US west coast and in November 1956, the new aircraft carrier returned to the east coast. During the next 10 years, the ship made several trips to the Mediterranean. After the completion of 23 voyages, the ship was decommissioned on September 30, 1977, and struck off from the Navy Register the next day.

The USS Franklin D. Roosevelt (CV-42) is one of the aircraft carriers manufactured to transport and deploy aircraft through sea during the war. Aircraft carriers were built during the early-to-mid 20th century using asbestos equipment including boilers, pumps, valves, turbines, and electrical components as potential fires were quite common on these ships. Some passengers would also wear asbestos suits to extract pilots whenever a fire occurred on the deck. The veterans who worked on these ships were exposed to high amounts of asbestos and therefore account for nearly 30% of mesothelioma diagnoses currently. The risks of asbestos exposure from these vessels continue as the shipyard workers are still associated with the repair of these ships.

Have You Been Exposed to Asbestos on the USS Franklin D. Roosevelt (CV-42)?

Most veterans who have served the US Navy aboard the USS Franklin D. Roosevelt (CV-42) were likely to have been exposed to deadly asbestos. The victims who have developed an asbestos-related illness can claim their rightful compensation along with the VA benefits. We are here to help veterans know their rights. We can also assist in getting in contact with your former colleagues. For more information, call us at 760.621.6147.