The USS Fremont (APA-44) was a Bayfield-class attack transport.

The main deployments of the ship were during World War II.

The USS Fremont mostly assisted other warships by moving troopship to where there was a need for that type of intervention.

For its actions during World War II, the ship was awarded five battle stars. 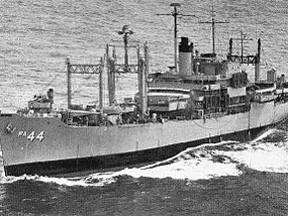 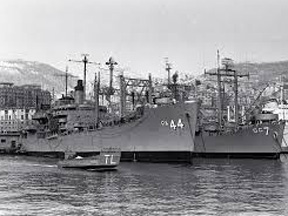 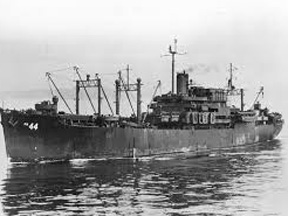 History of the USS Fremont (APA-44)

The USS Fremont was built by Ingalls Shipbuilding, Pascagoula, Mississippi. It was fully commissioned by 23 November 1943 with Captain C. V. Conlan assigned as commanding officer. On 16 June 1944, at Saipan, the Fremont performed its first assault landing at sea. The operation lasted 10 days, time in which the ship not only continually landed troops but also took casualties on board. From July to August 1944, the ship was at Pearl Harbor preparing landing operations for the Solomons. In September 1944, the Fremont was engaged in diversion mission in the vicinity of the Babelthuap Island. Without any opposition, the vessel took part in the occupation of Ulithi. Afterward, the ship sailed to Hollandia and Manus to participate in training exercises.

At the beginning of October 1944, the ship left Manus to prepare for the operations in Leyte Gulf. A few times during that interval, the Fremont was attacked by enemy aircraft. However, the most damage that had been done to the vessel was on 24 October 1944, during the Battle of Leyte Gulf when the ship had seven of its men injured by the explosion of a shell. In November 1944, the Fremont departed to Hollandia where it loaded cargo and men in order to prepare for the attack on Luzon. As the exercises were taking place, the ship came under the attack of a lone aircraft but the crew successfully repelled it.

In January 1945, the Fremont departed to Guam where it took on board Marines in preparation of the operation in Iwo Jima. By February, the ship was landing the troops at Iwo Jima and at its return to Saipan in March 1945, the Fremont was bringing along casualties and prisoners of war. After a brief upkeep period at New Caledonia, the vessel went back to Leyte Gulf loaded with troopship. From October 1945 to August 1946, the Fremont was deployed two times to Pearl Harbor and two more times to the Philippines to bring back Marines that had to be released of duty for various reasons.

In January 1947, the Fremont was assigned to work along the Atlantic Fleet at Norfolk, Virginia. Between 1947 and 1960, the ship had gone on seven deployments with the 6th Fleet in the Mediterranean. During its 1958 tour, the Lebanon Crisis had begun which led to the Fremont being ordered to land Marines at Beirut from July to August 1958.? When not deployed, the ship was training Marine Corps off North Carolina coast and in the Caribbean. In 1969, the Fremont departed to Portsmouth, Virginia to began its decommissioning process.

"My unit was quartered in the aft troop compartment and witnessed asbestos floating in the atmosphere therein throughout our cruise", said Donald C., a veteran exposed to asbestos while serving in the U.S. Navy.

"Everybody got sick and I was one of them. I think it was asbestos. I'm 85 years old now I also was a writer and a photographer so I took a lot of pictures", said another Navy veteran exposed to asbestos on the USS Fremont (APA-44). For a long time, the people serving in the U.S. Navy were exposed to a toxic mineral called asbestos without having been informed of the dangers that working in the proximity of such substance would do to their health.

Asbestos only really becomes a problem when it is in fiber form, meaning that any renovation or demolition work that occurred on the ship was likely to create asbestos dust that was easy to breathe in, swallow and carry around on clothing to various parts of the vessel. Once inside the body, the asbestos fibers start irritating the thin lining of organs such as the lungs, the heart, and the abdomen, potentially leading to various forms of cancer after up to 50 years of latency.

Thus, it could be a long time before veterans that served in the Navy would even develop any symptoms at all, and by the time they do notice the signs of illness, the conditions would already be at an advanced stage.

Have You Been Exposed to Asbestos on the USS Fremont (APA-44)?

If you are affected by an asbestos-related disease, we can help you with extensive information about how asbestos exposure works. We can also put you in touch with experienced asbestos attorneys. To learn more, call us at 760.621.6147.