The USS George Clymer (APA-27) was an Arthur Middleton-class attack transport. The main preoccupation of the vessel was the transport of troopship.

The USS George Clymer was involved in four wars while on service with the U.S. Navy, respectively, the Chinese Civil War, World War II, the Korean War and the Vietnam War.

For the last three, the ship received a total of 15 battle stars. 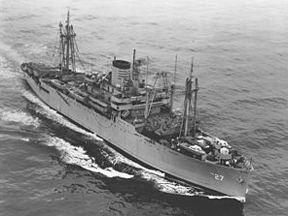 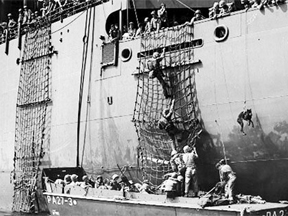 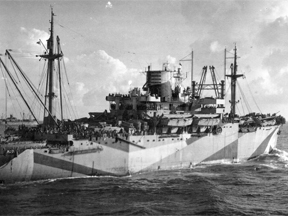 The George Clymer was built by Ingalls Shipbuilding, Pascagoula, Mississippi. It was commissioned on 15 June 1942 with Captain Arthur T. Moen commanding. In July 1942, George Clymer was taking part in training exercises in the Chesapeake Bay in Norfolk, Virginia. After completing preparations, the ship took on board 1,400 men pertaining to the 9th Infantry Division and left for French Morocco.

On 8 November 1942, just around midnight, the George Clymer unloaded troops at Mehedia and Kasba, and as the debarking was taking place, they encountered resistance responses from the Vichy French. The fight did not settle down until 11 November, meaning that the ship had to carry its operations of unloading troops and caring for the wounded under continuous fire from the enemy. On 30 November 1942, the vessel arrived at Norfolk. On 17 December 1942, the George Clymer departed for the Pacific with over 1,300 Seabees on board. In February 1943, the ship arrived at Guadalcanal, Solomons to provide reinforcements, but to also take on board casualties and prisoners of war from Japan. For the following 9 months, the George Clymer traveled all around the Southwest Pacific, moving troops from one base to another in New Zealand, New Caledonia, New Hebrides and Fijis.

In April 1943, the ship helped with the evacuation of almost 40 Chinese and Fijian women and children that have been hiding from the Japanese for longer than a year. They were transported from Guadalcanal to Noumea. On 30 October 1943, the George Clymer was headed towards Bougainville to prepare for its invasion. The ship coordinated with other vessels and they supported each other when they began the bombing of Cape Torokina. For the following three months, the ship went to Bougainville three times to unload supplies and troopship. It was only in June 1944 that the George Clymer finally left Guadalcanal and it was so that it could participate in the invasion of the Marianas. After unloading troops, the ship acted as a medical refuge for the units of the Southern Transport Group. Until 20 August 1944, the ship stayed at Guam, but then it took the route of Saipan to get to Pearl Harbor where it arrived in August.

On 21 October, the George Clymer debarked almost 1,000 troops at Dulag as the Battle of Leyte was taking place. Afterward, the ship departed for San Francisco where it arrived on 3 December 1944, beginning overhaul. Shortly after, in February 1945, the George Clymer was preparing for the invasion of Okinawa. By May, the ship was back in San Francisco. From 21 to 27 July 1945, the vessel took 1,200 Seabees to Pearl Harbor and in August it departed for the Philippines. It arrived in Manila on 7 September and it immediately engaged in another transport mission, embarking nearly 1,000 troops belonging to the 33rd Infantry Divison to take them to Japan.

The George Clymer was a part of Operation Magic Carpet, carrying to San Francisco over 1,200 veterans from Saipan between 31 October and 14 November. On 20 January 1948, the George Clymer arrived in China where it participated in operations for a six-month period in an effort to support the Nationalist Chinese troops as the Chinese Civil War was intensifying. Following the invasion of South Korea by the North Korean army, the George Clymer left San Diego on 14 July 1950, transporting to Pusan, South Korea troops of the 5th Provisional Marine Brigade to disrupt the advance of the Communists.

The George Clymer also participated in the invasion of Inchon on 15 September 1950, debarking troops from the 1st Marine Divison as the attack was put together. During another deployment to the Far East that started in June 1951, the ship continued to offer its assistance in crippling the aggression of the Communists in Korea. The George Clymer was alternating troops between Japan and Korea. On 15 October 1951, the ship was engaged in a rescue mission in which it took on board almost 500 people from a Japanese merchantman that had been devastated by a typhoon at Uku-Shima, Japan. With the end of the hostilities in Korea, the George Clymer still had to tour the Far East as it had to report to the 7th Fleet which had ongoing operations there. As a result, the ship had to be prepared for combat at any point while sailing the Western Pacific and Southeast Asia waters. In 1965 and 1966, the George Clymer was involved in missions in South Vietnam.

On 31 October 1967, in San Diego the George Clymer began decommissioning. The ship was to be scrapped by the National Metals and Steel Corporation after a 25-year service for the U.S. Navy.

Asbestos constituted a vital component in the grand scheme of things for the U.S. military for the greater part of the 20th century. The reason behind the relentless exploitation of the mineral was its insulation and fireproofing qualities, which made it a great asset to the safety of everyone, and especially for those working on submarines or vessels.

Asbestos was used in all branches of the military but it was especially relied upon by the Navy particularly in building the spaces below the deck, including ammunition rooms, engine rooms, boiler rooms, and in many cases asbestos was present even in the areas in which the personnel slept. The rest of the ship usually had asbestos paint covering its walls that would gradually deteriorate and cause asbestos fibers to become airborne and thus, be easily inhaled.

Although the toxicity and harmful effects of asbestos on human health have been confirmed for quite some time now, this piece of knowledge was withheld from the public back then allowing the dangerous exposure to happen to hundreds of thousands of people serving their country.

Have You Been Exposed to Asbestos on the USS George Clymer (APA-27)?

If you are suffering from an asbestos-related disease, we can help you improve your knowledge on the subject. If you would like, we can also put you in contact with your former shipmates. Call us at 760.621.6147 for more information.