The USS Goldsborough (DDG-20) was a Charles F. Adams-class destroyer ship. The inspiration behind the name of the ship was Louis Malesherbes Goldsborough who was a rear admiral in the United States Navy at the time of the American Civil War. The USS Goldsborough was mainly tasked with escort operations regarding other vessels traveling in a convoy. The ship served for the U.S. Navy during the 1960s, the 1970s and the 1980s. For its participation in missions off the Vietnam area, the ship earned the Naval Unit Commendation. 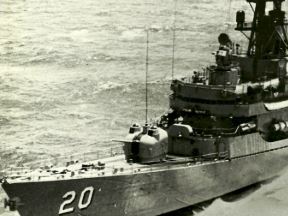 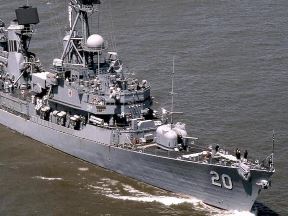 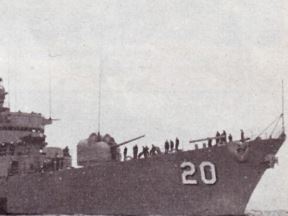 History of the USS Goldsborough (DDG-20)

The USS Goldsborough was built by the Puget Sound Bridge and Drydock Company in Seattle, Washington. The ship was sponsored by Mrs. Alas Bible and it had Captain Charles D. Allen, Jr. commanding upon its commissioning on 9 November 1963.

The Goldsborough performed successful sea trials after which it was headed to Pearl Harbor where it arrived on 14 February 1964. The ship conducted operations off Hawaii until the beginning of the fall. In November, the vessel was deployed on its first tour in the West Pacific.

The Goldsborough took part in exercises that were meant to improve the dynamic among the units of the 7th Fleet in anticipation of the interventions in the Vietnam War. After finishing training with the 7th Fleet, the vessel was engaged in anti-submarine training at Pearl Harbor.

In April 1966, the Goldsborough was involved in Operation "Binh Phu I", having conducted a heavy firing on Viet Cong military locations. The following month, the ship was caught up in Southeast Asia Treaty Organisation (SEATO) training and by June it was serving in Hong Kong.

In August 1966, the Goldsborough underwent an extensive overhaul at the Pearl Harbor Naval Shipyard. The following year, the ship took part in "Operation Sea Dragon", which represented an attempt to disrupt the communication system as well as the circulation of supplies into the Republic of Vietnam. During this operation, the ship fired almost 10,000 rounds against enemy forces and managed to finish the mission without being hit at all in return.

After an upkeep period in 1970, the Goldsborough was once again leaving for the West Pacific in order to offer its support to the allied forces operating in the region, alternating with escort missions in the Gulf of Tonkin.

In October 1972, the ship left for what would turn out to be its last Western Pacific tour operating off the Vietnam area. In the month of December of that same year, the Goldsborough was fired upon and the crew ended up with three casualties and a few other wounded servicemen. The vessel, too, was quite damaged, most notably by a battery that created a five feet wide crater through the upper deck.

In 1976, the Goldsborough was commanded to sail to the Indian Ocean to join the Ranger Task Force as a reaction to Operation Entebbe coordinated by the Israel Defense Forces.

In April 1993, the Goldsborough was placed out of commission and taken off the Naval Vessel Registry. In September, the ship was bought by Australia where it was towed to be scrapped.

Prior to the 1980s, all ships in the United States Navy were constructed with asbestos-containing materials. The mineral has an increased resistance to fire while it is also strong and durable, qualities which highly resonated with the Navy officials constantly wanting to improve the infrastructure of their ships in order to be able to better protect those who served at sea. Because of the insulating properties of asbestos, at some point mixtures containing it were coating all the essential systems on the vessels in their entirety.

While asbestos is not dangerous unless it is encountered as particles that would be easy to inhale, a ship doing active duty at sea would regularly release the toxic fibers in the air as the vibrations of the vessel would lead to the crumbling of asbestos insulation and to the creation of toxic dust. Servicemen that were assigned to handle the repairs or the renovations were thus exposed to breathing in the damaging fibers that, according to medical research, cannot be expelled by the body on its own.

Asbestos-related diseases are notorious for having long periods of latency lasting, depending on the exact condition one suffers from one, five or even six decades before manifesting in a way that would alert the person of their presence. Due to the fact that illnesses caused by asbestos have symptoms that match numerous other diseases, it has often been the case that the correct diagnosis is established too late.

Have You Been Exposed to Asbestos on the USS Goldsborough (DDG-20)?

We can help you improve your knowledge regarding the asbestos exposure suffered by people who did duty on the USS Goldsborough (DDG-20). We can also put you in contact with former colleagues from your time of service. Call us at 760-621-6147 for more information.