The USS Goshen (APA-108) was a Bayfield-class attack transport. The main duty of a ship of this type was to ensure the secure and timely transportation of troopship in the needed areas of conflict.

The most notable operations in which the USS Goshen was involved occurred during World War II when it was ordered to carry invasion forces in the combat zones, especially in locations off Okinawa. For its participation during the war, the ship received a World War II Victory Medal, among a few other awards. 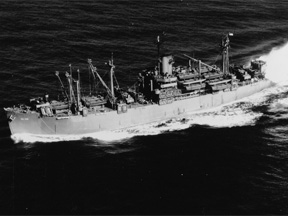 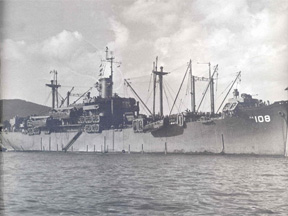 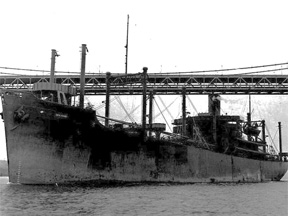 The USS Goshen was built by the Western Pipe and Steel Company. In December 1944, the ship was commissioned and Captain Carroll T. Bonney was the commanding officer in charge.

After completing shakedown off the California coast, the vessel left Long Beach in February 1945 in order to engage in even more training exercises, especially amphibious warfare in the islands of Hawaii. When it was stationed briefly at Honolulu, the Goshen took on board 1,400 servicemen to transport them to the Western Pacific.

The ship made port calls at Ulithi and at Eniwetok after which it steamed to Okinawa where it docked in April 1945 and unloaded men and cargo for five days. After it finished its landing mission, the Goshen was headed to the United States and by June it arrived at San Francisco.

In July, the ship was yet again deployed to the Western Pacific to reinforce both the supplies and the armed forces there during what would end up being the last month of the war. When the Japanese officially surrendered, the Goshen was stationed at Saipan.

By the month of December that same year, the ship participated in Operation Magic Carpet in which multiple ships were ordered to bring the American veterans back to the United States. The Goshen left Sasebo with more than 1,400 Marines on board and disembarked them at San Diego on the 28th.

The vessel was placed out of commission at Norfolk in April 1946 and it was sold in 1947. In 1968, the ship was in the possession of Waterman Steamship but in 1973, the Goshen was moved to Kaohsiung in Taiwan where it was scrapped.

Asbestos is a toxic mineral that used to be heavily mined across the United States just a few decades back before its extremely damaging effects on the health of humans were discovered and the usage of materials and products containing it faced serious regulation in the 1970s.

Due to its ability to not combust in mediums with high temperatures, asbestos was used for fireproofing in the construction industry but also in textiles. Another field that manifested interest in the qualities of the mineral was the U.S. military, the Navy in particular. As those in service would be deployed for months at a time, Navy officials were constantly trying to make the ships as safe as possible.

These intentions, however, were met with quite the reversed outcome as they ordered for vessels to be insulated with asbestos-containing materials. In retrospect, and with the knowledge gained over the years in regard to asbestos, they contributed to the creation of a hazardous medium and nobody on the ship, officer and sailor alike, was safe from the toxic exposure.

Have You Been Exposed to Asbestos on the USS Goshen (APA-108)?

We can help you learn more about the ways in which Navy veterans were exposed to asbestos at the time of their service. For more information, call us at 760.621.6147.