The USS Grand Canyon (AD-28) was a Shenandoah-class destroyer tender. It was an auxiliary vessel that was meant to provide supplies and maintenance work to other ships.

The USS Grand Canyon was constructed as World War II was coming to an end.

The ship was involved in the Suez Crisis and in the Cuban Missile Crisis supporting the fleet conducting operations in these locations. 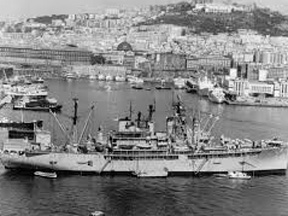 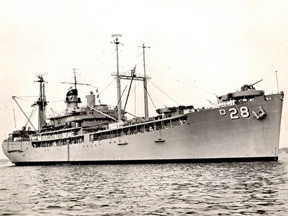 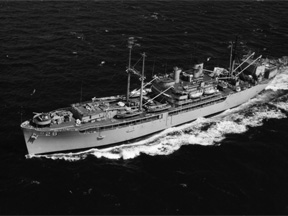 In September 1957, the ship was involved in NATO exercises among other units of the Atlantic Fleet. In August 1958, the Grand Canyon steamed to Souda Bay in order to take part in the operations in Lebanon. For approximately four months, the ship offered its support to other warships that were commanded to keep a close watch on the aggression in the area. For most of 1959, the Grand Canyon was docked at Newport and only performed local tender operations. In January 1960, the ship took part in Operation Springboard, which was an annual series of exercises taking place in the Caribbean.

In November 1962, the Grand Canyon arrived at San Juan, Puerto Rico, where it was assigned to tend to vessels of the South Atlantic Blockading Fleet, particularly during the Cuban Missile Crisis and the period immediately following it. In 1963 the Grand Canyon was stationed at the Bethlehem Steel Yards, Boston in order to undergo a modernization overhaul. After completion in January 1964, the ship left on a shakedown cruise in Guantanamo Bay and San Juan. In March 1971, the Grand Canyon was reclassified as Repair Ship (AR-28), and on September 1978 the ship was placed out of commission and sold to be scrapped two years later.

In the course of the 20th century and especially in the first half of the period, people serving in the U.S. military were exposed to asbestos, which is a toxic mineral that becomes dangerous when it is in its fiber form due to the fact that once it is inhaled, the human body has no way of expelling the particles.

Asbestos fibers that have been breathed in usually cement themselves in the soft lining of the lungs, heart and abdomen, and after decades of latency, they will provoke the development of cancerous tissues. To the misfortune of a great number of people, asbestos was discovered to be harmful to humans long after it was used virtually in everything from construction to the textile industry, and with the world wars occurring, there was a massive demand for it in the military as well.

The mineral was cheap, light and a poor conductor for electricity, qualities that made the Navy gain a special interest in it. From navigation rooms to boiler and engine rooms and even the sleeping quarters, there was hardly a place on a ship that was not somehow infested by asbestos. As a result, it comes as no surprise that veterans, particularly those that served in the Navy, constitute a big percentage of patients suffering an asbestos-related disease.

Have You Been Exposed to Asbestos on the USS Grand Canyon (AD-28)?

"I worked calibrating gauges and tools used throughout the ship. Some of the gauges were covered with asbestos and we handled them." - Ken M.

Find out more about the risks associated with asbestos exposure and about how it occurred in the U.S. Navy. We can also help you reach out to your former shipmates. Contact us at 760.621.6147 for more information.