The main preoccupations of the vessel were to carry gunpowder and munition of all sorts to the warships at sea.

The most notable time in service for the USS Great Sitkin was its involvement in the Vietnam War for which it was awarded two campaign stars. 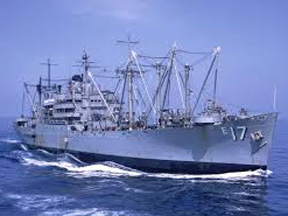 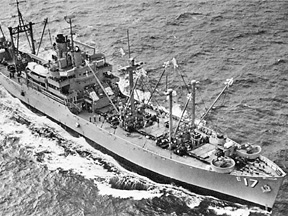 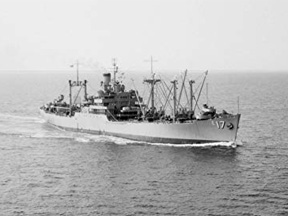 The USS Great Sitkin was built by North Carolina Shipbuilding Company, Wilmington, North Carolina. Miss Anne L. Dimon was its sponsor and Lieutenant Commander William F. Smith was assigned as commanding officer when the ship was commissioned on 11 August 1945. In November 1945, after completing shakedown the ship departed for New York with a mission assigned in the area around Sandy Hook, New Jersey. This operation lasted for almost an entire year, at the end of which, the Great Sitkin sailed back to Norfolk in November of 1946. Until the end of 1950, the ship alternated between tours in the Caribbean and the Canal area supplying ammunition to warships operating in these locations.

Beginning in 1951, the Great Sitkin was ordered to serve with the 6th Fleet in the Mediterranean. The ship participated in the crises from Lebanon and Suez. In the time periods in which the vessel was not off sailing Mediterranean waters, it offered help in mission taking place in the Atlantic and in the Caribbean.

In 1962, when the Cuban Missile Crisis was ongoing, the Great Sitkin joined the other ships closing in on the island in order to contain the communist threat. For a few weeks, the vessel sailed the area of Cuba with ammunition in reserve. In December 1962, the Great Sitkin was finally able to steam back to New York to resume its operations in the Atlantic and in the Mediterranean. From August 1963 to July 1966, the ship left on three deployments with units of the 6th Fleet. Among other operations, the Great Sitkin and the Fleet also took part in exercises coordinated by NATO. For a three-month period, the Great Sitkin had to stop active duty in order to undergo an overhaul at Bethlehem Steel Shipyard, Hoboken, New Jersey. By December 1966, the ship was sailing to Cuba again, training off Guantanamo Bay and maintaining a close distance in case there was need of ammunition replenishment.

The Great Sitkin took part in the Vietnam War in 1968, serving alongside the 7th Fleet during Phase IV and Phase V of the Vietnamese Counteroffensive. In 1973, the Great Sitkin was taken off the Naval Register and there is no mention of its fate after that.

Asbestos is a toxic mineral that only becomes a health hazard when it is disturbed from its compounds and turned into dust. Once released into the air, the asbestos particles can be breathed in and they can attach themselves to the thin internal lining of vital organs such as that of the abdomen, lungs, and heart. The fibers will irritate the organs for decades without any warning signs before causing diseases like asbestosis, lung cancer or mesothelioma.

For those that served in the U.S. Navy, living and working on a ship meant a constant exposure to asbestos since there were large quantities of the material that were used in shipbuilding prior to the 1970s. This means that any renovations or repair work resulted in the air being polluted with carcinogenic asbestos fibers. Those working in spaces in which asbestos was airborne were also carriers of the toxic material to other places of the ship by means of their clothing, unaware that they are spreading the toxin around and increasing the number of those exposed to it.

Have You Been Exposed to Asbestos on the USS Great Sitkin (AE-17)?

We can help you understand better the asbestos usage in the Navy. We can also help you connect with your former shipmates. For more information, call us at 760.621.6147.