The USS Gridley (CG-21) was a Leahy-class guided missile cruiser. Ships from this class were meant to ensure the smooth course of carrier task forces by protecting them against aircraft and submarine assaults.

The USS Gridley was named after Charles Vernon Gridley, a Navy officer whose actions in the Battle of Manilla in the Spanish - American War made him into an important figure in American history. 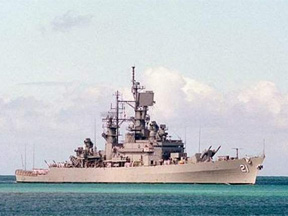 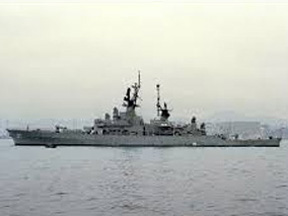 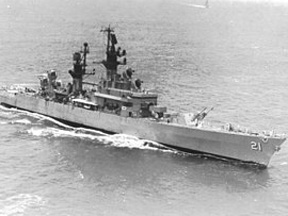 History of the USS Gridley (CG-21)

The USS Gridley was built by the Puget Sound Bridge and Drydock Company of Seattle, Washington. Mrs. Stuart D. Rose sponsored the ship and on 25 May 1963, when the ship was commissioned, Captain P. A. Lilly was assigned in command. After completing shakedown off Long Beach, California, its homeport, the ship was ordered to the Pacific Fleet and took upon itself the role of flagship of Destroyer Squadron 19.

In August 1964, the Gridley was sailing the waters of the South China Sea in order to assist the American units around Vietnam after torpedo boats were released in the Gulf of Tonkin by the Communist forces targeting USS Maddox and USS Turner Joy. The Gridley was stationed for a while at Subic Bay to handle communications and to offer anti-aircraft screening to the American vessels. For this deployment, the Gridley was awarded the Navy Unit Commendation in September 1964. On 10 July 1965, the ship was on tour to the Western Pacific again. The Gridley helped the aircraft carriers of the 7th Fleet with their attacks on Vietnamese targets. While operating in the area, on four different occasions, the ship saved pilots that had ditched their posts.

In 1966, the Gridley was the winner of the Captain Edward F. Ney Award, testifying for the food-service excellence on board of the vessel. The Gridley also received the Battle Efficiency Competition Award around the same time and the Supply Efficiency Award. In January 1967, the ship left for aircraft supervision in the China Sea and in the Gulf of Tonkin. In November 1970, the ship completed a complex overhaul that had equipped it with upgraded anti-aircraft and anti-submarine systems, the vessel having been the first one in its class to benefit from a Naval Tactical Data System. Two years later, in 1972, the Gridley had digital missile control systems installed.

In 1975, the ship participated in Operation Frequent Wind mostly by coordinating air traffic during the evacuation following the fall of South Vietnam. Similar duties were performed by the Gridley at the time of the Mayaguez incident. In 1967, the Gridley left for a WestPac deployment docking at its temporary homeport in Yokosuka, Japan. In 1980, the ship screened the USS Okinawa Battle Group as Operation Eagle Claw was taking place, which was the effort oriented toward saving the Americans held hostage at the Iranian Embassy.

In October 1982, the Gridley docked at Long Beach Naval Shipyard for another sophisticated overhaul that primarily targeted its machinery and engineering processes. Even better radar and fire control were added to the vessel. July 1987, saw the ship as part of a battle group on the sea launching strikes against Iranian oil marks. In December 1988, the Gridley steamed to the Persian Gulf to screen Kuwaiti tankers as its contribution to Operation Earnest Will. In October 1989, in the wake of the San Francisco Bay area having been hit by an earthquake the vessel hurried to help the victims and for its actions during the aftermath, the ship received the Humanitarian Service Medal. Between February 1990 and March 1991, the Gridley was docked at Southwest Marine Shipyard in San Diego, California where it had installed the New Threat Upgrade which improved the capacity of the ship to detect enemy aircraft.

In August 1992, as Operation Southern Watch was ongoing, the Gridley was in charge of air traffic when the American forces established a "no-fly" zone over the southern section of Iraq. The ship was stationed at the National Steel and Shipbuilding Company in the first half of 1993, receiving the SM-2ER block III missile, which was a surface-to-air missile with an extended range. However, in October that same year, the vessel steamed to San Diego where its decommissioning began. In 2005, the ship was scrapped.

The 20th century saw the rise of asbestos as the most popular choice in construction materials. It was a mineral with a high resistance to heat and electricity that was mined in large amounts all across the United States. All other types of insulation faded into oblivion as asbestos-embedded mixtures found their way onto the market. However, it was soon discovered that asbestos exposure had caused a number of patients asbestosis and cancer.

Even if the mineral was linked with cancer very early on, there was no effort on the part of officials to make the public aware of the danger as asbestos-related businesses were expanding. The circumstances of the people serving in the U.S. military and especially of those serving in the Navy were quite upsetting. In the case of a ship, it was basically every part of it that was built from some sort of asbestos material, including engines, boilers, gaskets, pipes, flooring, and walls.

If you know someone that suffers from an illness as a result of asbestos exposure, they might be able to recover damages and should seek legal assistance.

Have You Been Exposed to Asbestos on the USS Gridley (CG-21)?

We can help you learn more about asbestos exposure and how often it occurred in the Navy. We can also help you reach your former shipmates. Contact us at 760.621.6147 for more information.