The USS Halsey (CG-23) was initially a Leahy-class cruiser carrying the DLG-23 designation, but in the year of 1975, it was reclassified as a guided-missile cruiser and also it was redesignated CG-23.

As a warship, the USS Halsey was built primarily for operations requesting naval combat. The USS Halsey most notably reported for duty during the Vietnam War, actions which were rewarded with no less than eight Vietnam Service Medals among many other campaign awards that include recognition for humanitarian aid. 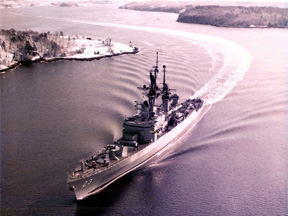 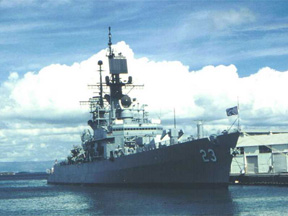 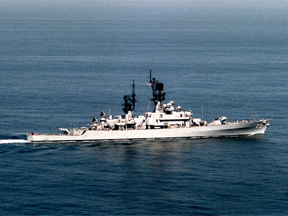 The USS Halsey was christened by Mrs. Margaret Denham and Miss Jane Halsey on 15 January 1962, which is the day the ship was launched at the San Francisco Naval Shipyard. At its commissioning, in July 1963, Captain H. H. Anderson was assigned commanding officer.
In November 1963, the Halsey left San Francisco and sailed to Dabob Bay and Carr Island in order to engage in anti-submarine warfare training, which it completed by December 7th.

On 31 December, the ship was ordered to report to Destroyer Squadron 7, Destroyer Division 71 in order to participate in a sea demonstration put together for the evaluation of the Secretary of the Navy. During the trials, the Halsey was specifically tested for its screening abilities. At the end of the demonstration, the ship resumed its qualification trials beginning with January 1964 until February that same year. During this period of accommodation, Halsey successfully performed missile firing on the Pacific Missile Range.

In 1966, the ship was yet again assigned to Destroyer Squadron 7, Destroyer 71. By July, the vessel departed San Diego and was headed to Subic Bay in the Philippines. In August, the Halsey was engaged in anti-submarine warfare and rescue operations while sailing in the South China Sea. In this same time period, the ship saved 16 airmen while cruising around in the Gulf of Tonkin.

The beginning of the year 1967 saw the ship performing training exercises off the West Coast. By April 10th, the Halsey departed San Diego and entered the San Francisco Bay Naval Shipyard for an overhaul. The renovations were finished in September when the vessel began another set of trial exercises to test its new equipment and capabilities. The Halsey was placed out of commission and simultaneously taken off the Naval Vessel Register in January 1994. In 2003, the ship was scrapped.

Just like the majority of the ships in the U.S. Navy, the USS Halsey had a wide range of asbestos equipment on board. In fact, before the early 1980s, ships were coated with asbestos mixtures for insulating purposes as the mineral had proven to be an excellent and cheap fireproofing material. As a consequence, hundreds of thousands of sailors were exposed to the mineral until its toxicity was detected and widely publicized.

Due to the vibration caused by various systems on the ship, as well as because of the steady movement on the sea, it was common for asbestos-containing products to crack and flake, releasing asbestos dust and creating a hazardous environment for quartermasters, boilerworkers, machinists etc. The danger is increased when the toxic fibers fill the air since it becomes easy for them to be inhaled and ingested, but also because as they latch onto clothing and hair, they can be spread around effortlessly.

Nowadays, people that have served in the Navy a few decades ago develop asbestos-related diseases, such as lung cancer, asbestosis or mesothelioma due to working closely with asbestos at a time when the public was unaware of its damaging effects on the human body. If you served in the Navy before the 1980s, you should inform your doctor about your possible exposure to asbestos and have an appropriate check-up.

Have You Been Exposed to Asbestos on the USS Halsey (CG-23)?

We can help you learn about asbestos usage in the U.S. Navy. We can also help you find former colleagues from your time in service. Call us 760.621.6147 for more information.