The USS Hammerberg (DE-1015) was a Dealey-class destroyer escort. The name of the ship honors Francis P. Hammerberg, who was a Navy diver that saved the lives of two other divers from a wreck that occurred in Pearl Harbor. The main purpose of a ship like the Hammerberg and others of this type was to escort other warships. The vessel was notably involved in the operations related to the Cuban Missiles Crisis. For its active service in the United States Navy, the ship was awarded the Navy Expeditionary Medal and also the National Defense Service Medal. 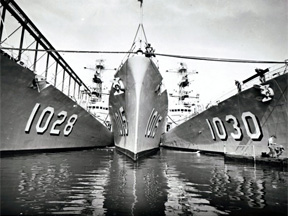 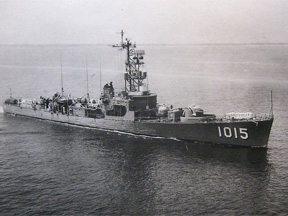 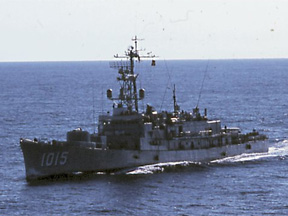 The USS Hammerberg was placed in commission on 2 March 1955 with Lieutenant Commander Murray E. Draper commanding and Mrs. Elizabeth Moss as a sponsor. The first two and half years in service were spent at the Naval Station Newport in Rhode Island, a time during which the vessel was engaged in convoy training exercises and in anti-submarine warfare exercises. In September 1957, the Hammerberg left Newport in order to take part in operations alongside NATO units. In April 1958, the ship was headed to Bodo, Norway to participate in joint training sessions with the Royal Norwegian Navy. Later on, from August to September, the Hammerberg joined Task Force 88 to take part in Operation Argus which was related to nuclear tests.

Leaving Newport on January 1959, the ship steamed to Guantanamo Bay to participate in anti-submarine warfare exercises with units of the Chile and Peru Navies. In August 1961, the Hammerberg left on a South American deployment. By November, at the request of the Organization of American States, the ship among other American ones did patrol duty off the Dominican Republic to keep the Communist influence in check.

Beginning in 1962 and all throughout the rest of its active service, the Hammerberg was consistently engaged in exercises at sea, while sometimes being called upon for other operations. For instance, in the year of 1962, when the ship was cooperating on training sessions with the Fleet Sonar School in Key West, it received orders, in November, to do patrol duty off the Florida Coast at the time of the Cuban Missile Crisis.

In November 1963, the ship was deployed to Guantanamo Bay in Cuba to take part in PHIBASWEX I-63, which was an anti-submarine warfare exercise that involved more than 30 other Atlantic Fleet units. The following year, the Hammerberg was involved in three major operations, i.e. Canus Silex, Springboard and Steel Pike, all of them aiming at improving surveillance, rescue, evacuation and blockade missions. In 1965, the ship steamed to Northern Europe to participate in a NATO exercise called Pilot High put together by Match Maker I Squadron.

In 1967, the Hammerberg continued its series of exercises by taking part in operation Clove Hitch III, which represented an amphibious training session in the Caribbean. Toward the end of September that same year, the ship steamed to the Mediterranean alongside a Hunter-Killer group mission. In December 1973, the ship was placed out of commission and taken off the Naval Vessel Register. The following year in June, it was sold for scrapping.

Until the late 1970s, the United States military used significant amounts of asbestos fibers in the construction of the infrastructure of a variety of ships. Perhaps the most pronounced asbestos usage was in insulation jobs, with the wrappings being in most cases 100% made of the toxic mineral.

The substance was used to cover electrical systems and pipes due to its capacity to resist to high temperatures without combustion, therefore, personnel that worked in the engine and boiler rooms were especially at risk of exposure. Aside from these spaces, the vessel had a considerable amount of equipment on board that contained asbestos such as valves, pumps, turbines and other apparatus that was related to the propulsion system.

Over time, the deterioration of these items would lead to them crumbling and, thus, to the creation of toxic asbestos dust. Inhaled asbestos particles get stuck on the thin lining that covers vital internal organs, irritating them until, in a few decades, a cancerous tumor is developed with no warning signs to alarm the individual of the seriousness of the sickness.

Have You Been Exposed to Asbestos on the USS Hammerberg (DE-1015)?

We can help you learn more about the impact of asbestos on the lives of veterans that served in the U.S. Navy. If you would want to file a claim, we can put you in contact with asbestos attorneys. Call us at 760.621.6147 for more information.