The USS Hancock (CV-19) was an Essex-class aircraft carrier. Such a ship was responsible for the good maintenance of aircraft on board.

For its service during World War II, the vessel was awarded four battle stars.

The USS Hancock also received two Humanitarian Service Medals for its participation in Operation Eagle Pull and, respectively, for its contribution to Operation Frequent Wind. 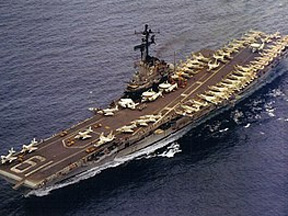 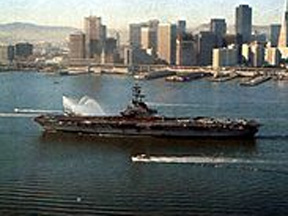 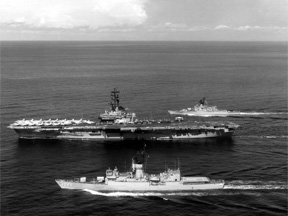 History of the USS Hancock (CV-19)

The USS Hancock was built by Bethlehem Steel Corporation, Massachusetts. The ship was sponsored by Mrs. Juanita Gabriel-Ramsey, and Captain Fred C. Dickey was assigned in command when the ship was commissioned on 15 April 1944. For its shakedown training, the ship sailed off the coasts of Trinidad and Venezuela.

By September 1944, the Hancock had joined the 3rd Fleet at Ulithi. While there, in October 1944, the ship reported to Task Group 38.2 along which it prepared to raid both air and sea bases in Formosa and Ryukyus, but also in the Philippines. For instance, on 10 October 1944, the Hancock's aircraft attacked airfields and sea routes of Okinawa. The planes from the Hancock completely destroyed seven of the Japanese planes, 12 torpedo boats, four of their cargo ships. Two days later, the Hancock destroyed a total of 15 enemy planes located in the Formosa air bases. As the American fleet withdrew to the sea, Japanese aircraft retaliated and a bomb was dropped on the port bow of the Hancock. However, no major damage was done and the ship took down the attacker seconds after the fact. After the assault, the entire task force sailed unbothered to the Philippines where they were ordered to assist the landings at Leyte.

On 23 October 1944, the ship was commanded to return to the coast of Samar to disrupt the Japanese fleet from trying to take over Leyte in order to challenge the U.S. Navy. Even if the Hancock did not get to Samar in time to get involved in the Battle off Samar, the ship did its duty by striking enemy aircraft and ships off Manila. Well into November, the Hancock supported the American armed forces by clearing their ways on the sea. On 25 November 1944, the Hancock was under kamikaze attack and when it was hit by the wing of the plane the deck erupted in fire. However, no serious damage was done as the fire was quickly put out by the personnel on board. On 27 November 1944, the Hancock left with its task group to do air patrol work off Luzon in order to be able to prevent kamikaze attacks on vessels that were in charge of lading forces ashore in Mindoro. On 17 December 1944, the Hancock had to sail through the Cobra typhoon, with only its flight deck having been affected by the storm. By 24 December 1944, the ship was docked at Ulithi for minor reparations. A few days later, the Hancock was back to active duty striking air and naval bases in the South China Sea.

The ship continued to strike enemy ships into January 1945, focusing on the areas around Gulf of Tonkin, the Pescadores Islands and in the harbor of Hong Kong. On 16 February 1945, the Air Group to which the Hancock reported took down 71 enemy planes around Tokyo. More strikes continued with the purpose of isolating Iwo Jima from their air and sea bases in order for the Marines to make it on the shore undetected. On 20 March 1945, while the Hancock was refueling a destroyer vessel, the American task force found itself under a sudden kamikaze attack and as one plane was aiming for the two ships doing fueling work, it did not end up reaching them, as it was disintegrated by gunfire from the rest of the fleet that had caught on to its tactics. With the landing of forces of the 10th Army invading Okinawa on 1 April 1945, the Hancock assisted with air support. Six days later, a kamikaze plane crashed into planes on its deck and the bomb that had been dropped by the same kamikaze made the port catapult catch on fire which led to a massive explosion on board. In their efforts to get the situation under control, 62 people died and 71 were injured. In spite of the tragic circumstances, the personnel was professional and in just half an hour the fire was put out, allowing the ship to resume its mission.

The Hancock recalled its aircraft on 15 August 1945 when it got news that the Japanese surrendered. However, its planes were sent over Japan with different kinds of missions, such as dropping food supplies and medicine, while also conducting searches on prison camps that they could relieve. The Hancock embarked 1,500 people at Okinawa that it transported to San Pedro, California where it docked on 21 October 1945.

At Puget Sound Naval Shipyard, the ship was converted and modernized to an attack aircraft in December 1951, and by October 1952, the vessel was also reclassified as a CVA-19. The shakedown cruise consisted of operations in the Pacific that were mainly focused on testing the new equipment, such as that of Sparrow I and Regulus missiles and the Cutlass aircraft. By 10 August 1955, the ship joined the 7th Fleet in missions around Japan and the Philippines. In April 1956, the ship was again converted and this time around it received an angled flight deck.

On 15 February 1958, the Hancock left for Japan. Along with its task group, the ship was alert when the Communists threatened the invasion of the Nationalist Chinese Islands, Quemoy and Matsu. In March 1961, the ship was docked at Puget Sound Naval Shipyard in order to receive new electronics but also to undergo necessary repair work. On 2 February 1962, the Hancock departed for Far East waters on a patrolling mission in the South China Sea to monitor the tensions in both Laos and South Vietnam. By 16 December 1965, the ship was surveilling Vietnam intensely. This deployment ended on 1 August 1966 with the return of the ship to Alameda, California. For its efforts in Vietnam operations, the Hancock was awarded the Navy Unit Commendation.

Early 1967, the ship sailed for Vietnam again and it immediately resumed its operations of striking Communist targets. In March 1972, the Hancock, alongside other carriers, was at the Yankee Station, off the coast of Vietnam, when South Vietnam was invaded by North Vietnam. As a response to these actions, the American fleet engaged in Operation Freedom Train, which focused on taking down logistics and military targets in North Vietnam. Subsequently, the Hancock participated in Operation Eagle Pull and Operation Frequent Wind, which were the codenames for the evacuations of Phnom Penh and, respectively, of Saigon in April 1975. In January 1976, the Hancock was placed out of commission and sold for scrapping.

The 20th century, particularly the first half of it, saw the United States economy and military praising asbestos, a toxic mineral that has proven to be extremely damaging to the human body. The most common way for the substance to enter the body is by inhalation. Once that happens, the human organism is not equipped with any mechanism that would help it dispose of the foreign fibers, meaning that the body cannot fight the irritation provoked by asbestos.

With properties such as fire resistance and low electrical conductivity, asbestos was heavily mined and manufactured until the 1970s when regulations in regard to its use started being imposed. However, until then, thousands of people from different lines of work had been interacting with the toxic material for years.

As present time shows, with veterans coming forth and speaking about the terrible consequences of their asbestos exposure, the use of the mineral impacted the lives of hundreds of thousands of individuals that served for their country, especially in the U.S. Navy, as asbestos was thought to have possessed the perfect qualities for such a field. The insulation on ships contained asbestos, not to mention the boiler and engine rooms and the mess halls, and since they were not aware of its toxicity, personnel did not wear any protective gear when working with or around asbestos-embedded equipment.

Have You Been Exposed to Asbestos on the USS Hancock (CV-19)?

If you think that your livelihood has been affected by the asbestos exposure you suffered during service, we can help you find experienced asbestos attorneys. To learn more, call us at 760.621.6147.