The USS John F. Kennedy was initially designed as CVA, but it changed to CV when the ship was modified to withstand submarine combat.

The name of the vessel honors a former President of the United States, John F. Kennedy, but also goes by the nickname Big John in the Navy and in popular culture. The ship won two Marjorie Sterrett Battleship Fund Awards and the Phoenix Award for best maintenance in the whole Defense Department in 1985. 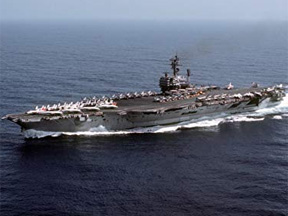 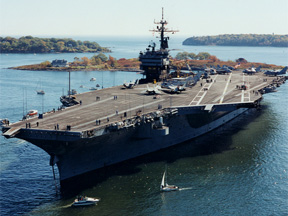 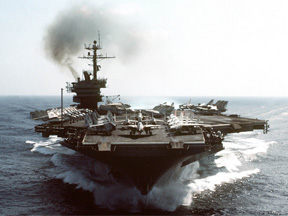 The USS John F. Kennedy was built by Newport News Shipbuilding. It was sponsored by Jacqueline Kennedy and its commissioning began on 7 September 1968. Initially, the vessel was supposed to be another ship in the Kitty Hawk-class, but while being built the design changed so much that engineering decided to form an entirely different class. The first tour of the Kennedy occurred in the 1970s, in the Mediterranean where it provided assistance in regard to the rising tensions in the Middle East. October 1973 saw the ship being involved in the actions coordinated by the Navy as a response to the Yom Kippur War, a conflict between Arab and Israeli forces. In June 1975, the Kennedy had eight fires on board that were started intentionally while the ship was docked at Norfolk, Virginia. Nobody was wounded and the damages were minor, but the arsonist was never caught, though it was suspected it was somebody from the crew.

In November 1975, there was a collision between the Kennedy and another vessel, the Belknap. The latter ended up badly damaged, but with the impact of the crash cutting through fuel lines, it resulted in fires erupting on both vessels. Seven people died on the Belknap and one life was lost on the Kennedy. In September 1976, while sailing about 100 miles from the north part of Scotland, another destroyer lost control and crashed into the Kennedy. This time, however, the ship was seriously wrecked and as a consequence, it was put off active duty in 1977. The ship underwent an overhaul that lasted for a year, starting in 1978 and reaching completion in 1979. In April 1979, the ship yet again had five fires set by arson on board at the time it was undergoing overhaul at Norfolk Naval Shipyard, Virginia. 34 people were severely injured and one person died.

In January 1982, the Kennedy was sailing the Indian Ocean for the first time and a for a while during this deployment the ship hosted the Somali head of state. In October 1983, the Kennedy was ordered to Beirut, after 241 U.S. military personnel were killed in a bombing attack as they were participating in the Multinational Force in Lebanon. The ship kept a close distance to the area until the beginning of 1984, mainly without engaging in any other ways, with one notable exception: the raid on 4 December 1983 over Beirut that only came as a response to American aircraft having been fired at the day before the operation. In 1984, the ship was stationed at the Norfolk Naval Shipyard for a complex overhaul that lasted more than a year and a half. In August 1986, the Kennedy was sailing Mediterranean waters yet again, taking part in many Freedom of Navigation exercises, but also reporting for duty off the coast of Lebanon, as more and more U.S. citizens were being held hostage in Beirut. In March 1987, the ship went back to Norfolk, Virginia where it was dry-docked for nearly a year and a half for major renovations.

On 10 August 1990, the ship was ordered to engage in Operation Desert Shield. For 24 hours the crew worked tirelessly to get the vessel ready for a speedy deployment resulting in the fastest combat ready response in the Navy since the Vietnam War. On January 1991, at midnight, the aircraft from the ship launched the first strikes against Iraqi targets as its contribution to Operation Desert Storm. On 27 February 1991, a ceasefire was ordered by President George H. W. Bush.

In March 1991, the Kennedy docked at Norfolk where it underwent a few upgrades. The ship then departed for the Mediterranean to prepare other Navy units for operations in Yugoslavia. Afterward, the Kennedy went straight into another overhaul at Philadelphia Naval Shipyard, one that was completed after two years. At the end of this period, the vessel had its homeport changed to Mayport Naval Station in Florida. In 1999, the ship rescued the crew of the tug Gulf Majesty that had collapsed after being hit by Hurricane Floyd. After this mission successfully ended, the Kennedy was commanded to participate in Operation Southern Watch.

Following the attacks on 11 September 2001, the ship took part in Operation Noble Eagle, guarding air traffic especially around Washington, D.C. In the first half of 2002, the Kennedy launched over 31,000 tons of artillery against Al Qaeda targets as part of Operation Enduring Freedom.

In July 2004, while steaming to the Persian Gulf the Kennedy accidentally collided with a dhow, a traditional Arab sailing vessel, killing everyone on board of the smaller ship. As a result of the incident, the Navy relieved the commanding officer of duty. Compared to other ships in the fleet, the Kennedy was the most expensive one to maintain, so when the ship was due for another overhaul, the Navy decided not to go through with it as there were major financial cutbacks and work on the Kennedy would have been too costly.

After announcing in 2009 that there were plans to use the Kennedy as a museum, the Navy stated in 2017 that they are canceling these arrangements and they will be dismantling the ship. However, as action has yet to be taken, there still are a few groups today petitioning for the vessel to be converted into a museum, hoping to attract the attention of a few generous benefactors.

For the most part of the 20th century, a fibrous mineral called asbestos was used by the majority of manufacturers in the construction industry, from personal homes to schools, power plants and shipbuilding. What made the mineral such a sought out option were its chemical and physical properties, more precisely, the fact that it was resistant to corrosion and to high temperatures. Characteristics such as these draw the attention of authority figures in the U.S. Navy and by collaborating with the government they managed to direct much of their resources into obtaining the permission to use large amounts of asbestos-based products in their particular military branch. Asbestos was also abundant in mines all across the United States, making it cheap in cost, which was an added bonus. However, as the public had been made aware since the 1970s, asbestos is also toxic to humans, the material having been established as the cause of some types of cancers. Among the Navy personnel, the people that were constantly exposed to asbestos were boilermakers, electricians, machinists and any crew member that helped in doing repair work.

Have You Been Exposed to Asbestos on the USS John F. Kennedy (CV-67)?

If you know someone that suffers from an asbestos-related illness, we can help broaden your knowledge about the usage of the mineral. We can also put you in touch with lawyers specializing in asbestos cases. For more information, call us at 760.621.6147.