The USS Joseph Strauss (DDG-16) was the 15th ship of the Charles F. Adams-class guided missile destroyers that served the United States Navy for almost 30 years mostly in the Vietnam War and during the hostilities between US and Iran in April 1988.

The ship was named in the honor of Admiral Joseph Strauss, a US Navy officer who served during World War I and later, as commander of the United States Asiatic Fleet. Its crew was eligible for multiple commendations for their service in the conflict zone. 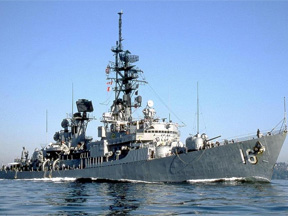 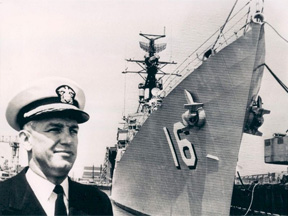 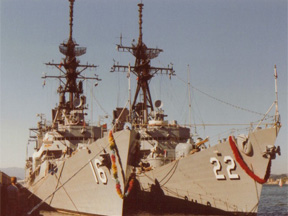 The keel for the USS Joseph Strauss was laid down in late December 1960 at the New York Shipbuilding Corporation's shipyards in New Jersey and launched in December the next year, sponsored by Admiral Joseph Strauss' granddaughter.

After its launch in April 1963, the ship left Philadelphia and headed for the West Coast through the Panama Canal to join the Pacific Fleet and headed for Japan. From there, the ship was sent to support the US destroyers in the Tonkin Gulf and the South China Sea that were getting attacked by the North Vietnamese forces. Besides short trips to the Philippines and various ports in Japan and China, the vessel spent the first half of the '60s patrolling the South China Sea and the Vietnam coast, a time during which the ship engaged in various operations that brought recognition and honor to both the crew and the ship. The USS Joseph Strauss was involved in the military operations where the US forces downed the first hostile aircraft in aerial combat since 1953, and it was also the first of the US Navy's guided missile destroyers to engage in open conflict with enemy targets, an action that brought its crew a commendation from the Commanding General. The vessel remained in the war zone south of Vietnam until its homeport was moved to Pearl Harbor in June 1996, and then operated in the Hawaiian area.

After the American frigate the USS Samuel B. Roberts struck a mine later identified as belonging to the Iranian forces in the Persian Gulf, the US forces launched a retaliation operation codenamed Operation Praying Mantis. It was the largest surface battle for American forces since World War II and the first ever surface-to-surface missile battle for the US Navy, where several US warships including the USS Joseph Strauss (DDG-16) managed to destroy or severely damage half of Iran's operational fleet.

The USS Joseph Strauss (DDG-16) was decommissioned from the US Navy service in February 1990 and transferred to Greece two years later. Greece kept the ship in operation until 2002 and sold it for scrapping in February 2004.

Before 1980 when the general population became more aware of the dangers of asbestos products, Navy ships used more than 300 types of asbestos-containing materials that the builders, repairmen, and crewmen were exposed to on a daily basis. Completely unaware of the hazards they were exposed to, and without any proper equipment to protect themselves from the toxic mineral, the personnel would work long shifts in that environment performing duties that would release large quantities of asbestos dust in the breathable air and the fibers would be breathed inside the lungs. The fibers get stuck inside the lungs or travel to other organs and cause tissue scarring over the years that sooner or later develops into incurable diseases such as asbestosis and leads to an increased risk of lung cancer. Due to a long latency period, the symptoms for an asbestos-related disease may take 20 to 30 years to show up and when they do, because of their similarity with other lung issues, the patients are often misdiagnosed, which is why an examination by a medical team experienced in asbestos-related diseases is extremely important.

Have You Been Exposed to Asbestos on the USS Joseph Strauss (DDG-16)?

If you worked with and around boilers, pipes, pumps, valves, or any insulating materials and adhesives while aboard the USS Joseph Strauss, we can help you understand what kind of asbestos exposure you encountered. Call us at 760.621.6147 to learn more.