The USS Lenawee (APA-195) was a Haskell-class attack transport. The ship was mainly tasked with moving troopship from one base to another depending on the conflict zone.

The most notable operations conducted by the USS Lenawee were during the Korean War and in the Vietnam War. The ship was awarded two battle stars for its service in World War II and three more for its contributions to the Korean War. 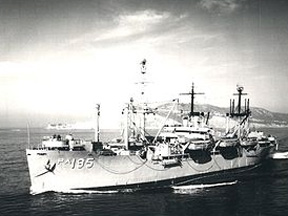 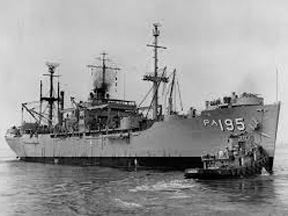 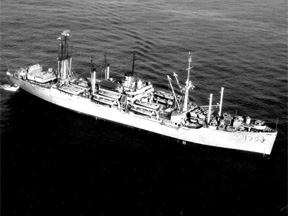 The USS Lenawee was built by Kaiser Shipbuilding Company, Vancouver, Washington. Mrs. Olaf Haugen sponsored the ship and when it was commissioned on 11 October 1944, Commander Carson R. Miller was put in command. As part of the shakedown, the ship was engaged in difficult amphibious exercises in the Hawaii area. After completing training, the Lenawee departed in January 1945 to the Marianas. While stationed there, it embarked over 1,500 marines. On 19 February 1945, after a course that lasted three days, the ship docked at Iwo Jima. Its first operations saw the Lenawee helping other vessels stationed there to unload troopship, the ship managing to debark its own forces three days after its arrival in the zone. After the task was finalized, the vessel stayed at Guam where it brought marine casualties for better medical supervision. In order to support the invasion of Okinawa, the Lenawee embarked more than 1,000 men at Espiritu Santo. The ship was present in the combat zone from 9 to 14 April 1945 and returned to the United States with no damage at all. As opposed to other ships from the fleet that were constantly under kamikaze attack, the Lenawee left intact due to its strategy of landing armament and troops during the day while at night it sailed back to the sea.

The Lenawee was in charge of the transport of men from the Philippines to Japan, as part of its duty with the Transport Squadron 16. At the time of the Japanese surrender on 2 September 1945, the ship was sailing in the Tokyo Bay carrying over 1,000 servicemen of the 1st Cavalry. The Lenawee participated in Operation Magic Carpet during two different tours at the end of which it returned to Stockton, California where it was placed out of active duty. However, as the Korean War began, the ship was fastly recommissioned in September 1950 and commanded by Captain E. M. Brown. As soon as the Lenawee was back to active duty, it was ordered to the Far East where it conducted many routine operations. When the truce at Inchon was signed in May 1953, the ship was there to ensure that the deal would proceed smoothly. The Lenawee assisted the Chinese Nationalist civilians and troopship, transporting them from the Tachen Islands to Formosa, having the U.S. Ambassador to China on board on the last trip from that mission.

In August 1957, at night, the Lenawee almost split another vessel, the USS Wantuck, in half after an accidental collision. The Wantuck had five burned men and one dead by drowning, while the Lenawee suffered no major damages. Starting with 1963, the Lenawee frequented the South China Sea and performed operations there regularly. The ship was also involved in the People to People project carrying approximately 10,000 textbooks and medical equipment to the Philippine and Vietnam in 1964. In January 1967, the Lenawee was ordered for inactivation and by June it was placed out of commission and it was eventually sold for scrapping.

Products containing asbestos started being used heavily in shipbuilding and shipyards as World War II demanded a massive number of vessels. Even if there were health risks associated with the use of asbestos as early as the 1930s, the mineral continued being incorporated in ships until the 1970s. Asbestos is highly resistant to corrosion and intense heat which is why the Navy believed it was the perfect choice for ship construction.

Beginning with the 1970s, authorities were willing to consider the risks of asbestos exposure. As a consequence, the Navy received orders to have their ships cleared of asbestos insulation which was in most parts of the vessels, such as boilers, steam pipes, and incinerators. Precisely in that same time period, people that served in the Navy started to come forth with incurable diseases they had contacted a few decades back when they were exposed to the toxicity of asbestos. If you are affected by an asbestos-related disease, you should look into the possibility of recovering damages.

Have You Been Exposed to Asbestos on the USS Lenawee (APA-195)?

We can help you sort out your own experience with asbestos exposure. Also, we can help you reach out to your former shipmates. Contact us at 760.621.6147 for more information.