As part of its duty, the ship was meant to guard the course of various convoys.

The name of the ship honors Fred Faulkner Lester, a Navy hospital corpsman that distinguished himself during the Battle of Okinawa receiving the Medal of Honor, the highest decoration for valor that can be awarded by the military. 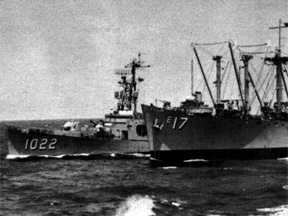 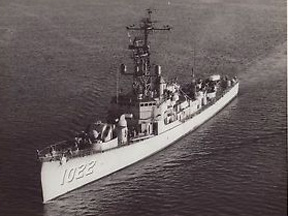 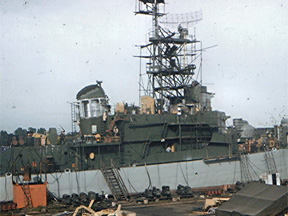 The USS Lester (DE-1022) was built by Defoe Shipbuilding Company in Bay City, Michigan. Mrs. Fred W. Lester sponsored the ship before its commissioning in June 1957. After the vessel finished its shakedown cruise, it arrived at Newport, Rhode Island where it joined Escort Squadron 14. In February 1958, the Lester sailed to Savannah, Georgia to rescue the people who survived the sinking of an Italian bulk carrier. On 12 May 1958, the ship steamed for the Mediterranean. On 21 May, it joined the units of the 6th Fleet while at Gibraltar. The Lester was also involved in actions related to the Lebanon crisis mainly having the duty of barrier patrol.

Beginning with October 1958, the ship was back at Newport where for the following three months it took part in anti-submarine warfare (ASW) training alongside Task Group Charlie, which had exclusively been tasked with the mission of improving the performances and strategies of convoys. In February 1959, the Lester joined Task Force 86 in order to practice ASW exercises in the waters of Latin America. The purpose of the tour was to strengthen the defense tactics of the maritime forces of South America. In May 1959, the ship went back to Newport after which it departed to Boston, Massachusetts to undergo an overhaul. The Lester completed refresher exercises alongside Dutch and Greek Marines by September 1959 at Guantanamo Bay.

In January 1960, the ship took part in Operation Springboard taking place in the Caribbean. In the months of September and October, the Lester departed to northern Europe to participate in convoy exercises put together by NATO before going back to Newport to prepare for next year's Operation Springboard. Between September and November 1960, the ship was stationed at Boston for an overhaul. For the following two years, the ship was engaged in more training programs, a notable moment being the opportunity to cooperate with South American navies.

In January 1965, the Lester departed to Key West, Florida to bring its own contributions to the Fleet Sonar School, supervising the service personnel while they learned and practiced sonar techniques and also ASW tactics. In May 1965, the Lester participated in training exercises with the Canadian navies and in June the two cooperated again for Operation Pole Star. Starting with January 1966, the ship took part in the Destroyer Escort Petty Officer Training Program for seven months during which it assisted the training of more than 100 men for them to be able to qualify for the petty officer rank.

In 1967, the Lester left for a deployment to the Mediterranean and Northern Europe, a course which the ship repeated in 1968. In 1973, the ship began the process of decommissioning at Naval Station Norfolk, Virginia. Next year, in June 1984, the Lester was sold for scrapping.

As the operations augmenting World War II demanded more and more resources, asbestos products became indispensable for the U.S. military and particularly for the Navy. Due to the physical properties of asbestos withstanding high temperatures and erosion, large amounts of the toxic mineral were made available to shipyards for it to be used, mostly for insulating purposes.

As a consequence, almost five million personnel working in shipyards during World War II were regularly exposed to asbestos, inhaling it, touching it and swallowing it, having no idea at the time the exposure occurred of the deadly consequences that would follow a few decades-long latency period.

Even as World War II ended, asbestos continued to be used in shipbuilding despite the fact that medical records linking the fibrous mineral to cancers developing in the human body kept piling up. By the time asbestos usage started being regulated in the 1970s, hundreds of thousands of people had already spent valuable time of their lives in the presence of the toxin and were starting to be diagnosed with lung cancer and mesothelioma, which are a direct result of that exposure.

Have You Been Exposed to Asbestos on the USS Lester (DE-1022)?

We can help you learn more about the effects of asbestos and about how the mineral was connected to the U.S. Navy. We can also help you find your former shipmates. For more information, call us at 760.621.6147.