The USS Long Beach was a Long Beach-class cruiser. The ship was the first nuclear-powered surface combatant in the world. By design, the vessel was built primarily for conducting warfare operations, the artillery with which it was equipped allowing it to withstand aircraft, submarines and other warships. The USS Long Beach was most notably involved in missions during the Vietnam War. For its service in the combat zone, it was awarded the Southwest Asia Service Medal alongside a Vietnam Campaign Medal. The ship also received six Battle Efficiency Ribbons. 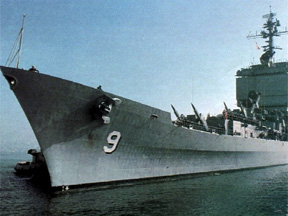 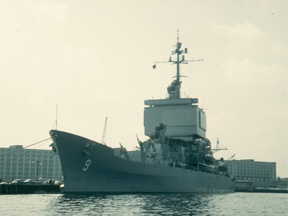 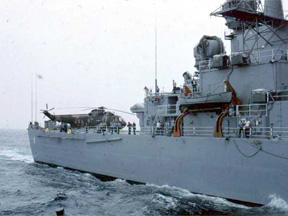 The USS Long Beach was built by the Bethlehem Steel Corporation in Quincy, Massachusetts under the initial CLGN-160 designation, however, the ship would then be reclassified twice in 1957, eventually settling on CGN-9. The ship was placed in commission in September 1961 with Commander Eugene Parks Wilkinson in command and Mrs. Marian Swanson-Hosmer as a sponsor.

The Long Beach was to report to the Atlantic Fleet, and the Naval Station Norfolk was assigned as its homeport. Between October and December 1961, the ship was engaged in complex shakedown training to test its artillery and its propulsion systems. From December to January 1962, the Long Beach was in the waters of Puerto Rico in order to perform tests of its missile firing which turned out successful.

In April 1962, the vessel was assigned the role of flagship within the units of the Atlantic Fleet. Together, they participated in exercises off North Carolina and Virginia. During these training sessions, the Long Beach was evaluated by both President John F. Kennedy and Vice President Lyndon B. Johnson. After completing an overhaul at the Philadelphia Naval Shipyard, the vessel was engaged in training exercises in Caribbean waters until August 1963, when it accompanied the 6th Fleet for operations in the Mediterranean.

In April 1964, the Long Beach steamed to the Mediterranean to be a part of the formation of the first task group that was all nuclear-powered. The task group conducted exercises in the Mediterranean until July, when the Long Beach was assigned to go on an around-the-world cruise referred to as Operation Sea Orbit. During the tour, there were numerous foreign people of influence that visited the ship, particularly when it was docked in ports from Africa, but also New Zealand and Brazil. After the ship had been in a period of upkeep, the Long Beach departed in November 1966 to Far East waters. During the deployment, the ship mainly operated as the Positive Identification Radar Advisory Zone (PIRAZ) unit while located in the Gulf of Tonkin. In addition to this, however, the vessel also used its radar equipment to assist helicopter units in Search and Rescue missions.

In 1968, the Long Beach was sailing in the Gulf of Tonkin again and in May it shot down a MiG jet fighter, an occurrence which would repeat itself the following month. After ending its operations in Vietnam, the ship did escort duty for other warships in the Indian Ocean and in the Western Pacific. During the 1976-1977 deployment, the ship also took part in multi-national training exercises. In 1980, the Long Beach saved the lives of 114 refugees fleeing Vietnam in a boat, a common happening at the time. In 1987, the ship was involved in Operation Earnest Will, and it also took part in Operation Nimble Archer by assisting other fleet units with anti-aircraft cover. In 1991, the vessel participated in Operation Fiery Vigil, which was focused on the evacuation of American servicemen from the Clark Air Base and from the U.S. Naval Base Subic Bay when Mount Pinatubo erupted.

As the Cold War ended, there were massive cutbacks in the budget regarding the Navy, which led to the decommissioning of the Long Beach in May 1995. The ship was sold for scrapping to the Puget Sound Naval Shipyard in Bremerton, Washington.

It is hardly news nowadays that exposure to asbestos-containing products will cause the human body much harm, yet just a few decades back workers from all the major industries in the United States regularly came into contact with the toxic mineral as part of their daily routine.

Those enlisted in the Navy, however, faced a significantly higher level of exposure since the U.S. Navy was acquiring huge quantities of asbestos, especially in 1939 when the United States military in general increased the production of weapons and military equipment in preparation of the outbreak of World War II. With its resistance to high temperatures and its chemical inertia in relation to other substances, asbestos was used in the majority of processes involving shipbuilding, the toxic fibers having been mixed in even with the flooring and with the walls of the vessels.

Pumps, valves and gaskets also had the toxic mineral in their composition as well as adhesives and insulation, the latter covering the pipes and wiring on board and, thus, spreading along the entire infrastructure of the ship, endangering the health of all who served at sea and of those working in shipyards as the vessels were being constructed or repaired.

Have You Been Exposed to Asbestos on the USS Long Beach (CGN-9)?

We can help you understand how the U.S. Navy used asbestos in building ships and in producing equipment destined for at sea activities. We can also help you find former colleagues from your time in service. For more information, contact us at 760.621.6147.