The USS Mansfield (DD-728) was an Allen M. Sumner-class destroyer. The vessel was mainly used for escorting other ships that were bigger in size at the times in which they would be required to travel in convoy or in the formation of a battle group. The USS Mansfield saw service during three major wars, i.e. WW II, the Korean War, and the Vietnam War. After sustained effort in the battle zones during numerous campaigns, the ship was awarded the Republic of Vietnam Gallantry Cross and the Vietnam Service Medal, as well as five battle stars for WW II service. 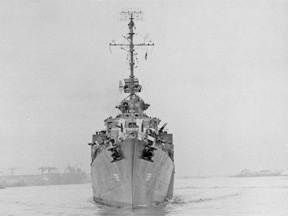 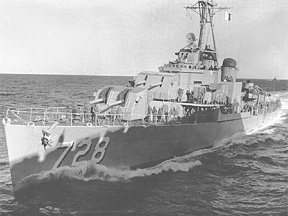 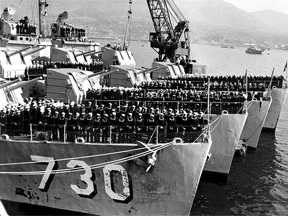 History of the USS Mansfield (DD-728)

The USS Mansfield was built by the Bath Iron Works Corporation in Bath, Maine. The ship had Mrs. Edmond F. Jewell as a sponsor and Commander Robert E. Brady, Jr. commanding at its commissioning in April 1944. The vessel completed shakedown in the Bermuda area and then it also went through sea trials at Norfolk Casco Bay in Maine.

In September 1944, the Mansfield joined DesDiv 112 along which it sailed to Pearl Harbor where they performed anti-aircraft firings and also shore bombardment. After completing training at Pearl Harbor, the Mansfield and more destroyers reported for escort duty for a convoy that was headed to Ulithi. Once the fleet reached Ulithi, the ship took part in Task Group 38.1 for screening operations while American forces would launch attacks against the central Luzon region.

By December 1944, the Mansfield had joined Task Group 38.2 for more screening operations targeting Luzon. However, an unexpected typhoon caused them to retreat. While a few other destroyers from the fleet suffered damage, the Mansfield escaped without a scratch but took on the survivors and transported them at Ulithi.

The Mansfield then reported to Task Group 30.1 as part of the 3rd Fleet, and operations took it into the waters of the South China Sea. Between 10 to 20 January 1945, the aircraft associated with the 3rd Fleet shot down 112 Japanese fighter jets. By February 1945, the Mansfield screened the carriers of Task Group 58.1 as they were firing at targets from the industrial region of Tokyo. Between the 17th and the 23rd, the units of the task group assisted the attack on Iwo Jima, after which it was ordered to immediately rush to Tokyo to partake in the bombardment of Kobe and Nagoya. During the months of March and April of 1945, the vessel offered screening services as the American carriers launched strikes against the south part of Kyushu and of Okinawa. About three weeks prior to the surrender of the Japanese, the Mansfield, alongside other three destroyers that formed DesRon 61, launched torpedoes against Nojima Saki that led to four sunk enemy ships. Two days after South Korea had been invaded by North Korea, the Mansfield promptly offered both escort patrol and gunfire to the latter.

After three months had passed, the ship was the flagship of DesDiv 91 and managed to end its operations in the area without any damage or casualties. However, two weeks after the battle in Inchon, the Mansfield hit a mine which did serious damage to the bow right below the main deck. The incident also contributed to 27 servicemen being injured. Although the vessel had received immediate attention at Subic Bay, it had to be redirected to the Naval Shipyard in Bremerton, Washington to undergo thorough reparations.

In 1951, the Mansfield was serving along the U.N. Fleet just off South Korea, engaging in multiple kinds of tasks from escorting to bombing. In 1955, the ship entered the Naval Shipyard in Long Beach, California. After completing maintenance and upgrade work, the vessel performed Fleet Rehabilitation and Modernization until 1960. Between October 1960 and October 1961, the Mansfield joined the 1st Fleet along which it continued to train and to perform test trials of the new equipment off the West Coast. In August 1965, the Mansfield reported for duty to the 7th Fleet and for the following six months, it screened the high-speed carriers, while at the same time offering gunfire in combat in the area of South Vietnam. In 1966, the ship had Yokosuka Naval Base as its homeport, with more and more following assignments taking the vessel to the South China Sea to engage in operations off Vietnam.

Besides screening service, the Mansfield took care of a few other duties in the late 1960s and early 1970, most notably air-sea rescue operations off the coast of Vietnam. In February 1971, the ship was placed out of commission and three years later, it was taken off the Navy Vessel Register and sold for scrapping to Argentina in 1974.

American Navy ships that were constructed before the 1980s had huge quantities of asbestos mixed in the building material, as the mineral was an impressive fire retardant and thus of high value for at sea operations.

People that have done their service for the United States either as officers, sailors or shipyard workers were all exposed to asbestos which at the time was only praised for its physical and chemical capabilities without a suspicion of the deadly consequences it has on human bodies.

Although those that had to perform regular tasks involving the maintenance or the reparation of asbestos-containing items, even the personnel that had nothing to do with such tasks still faced exposure to the toxic mineral since the mess halls and the sleeping quarters, which had a high concentration of asbestos in their walls and flooring, became deteriorated over time and so hazardous dust would be created and inhaled by those on board.

Have You Been Exposed to Asbestos on the USS Mansfield (DD-728)?

We can help you with more information about the ways in which Navy veterans were exposed to the toxicity of asbestos while serving for their country. To learn more, call us at 760.621.6147.